I Watched Cuties on Netflix: I’m Not Cancelling My Subscription 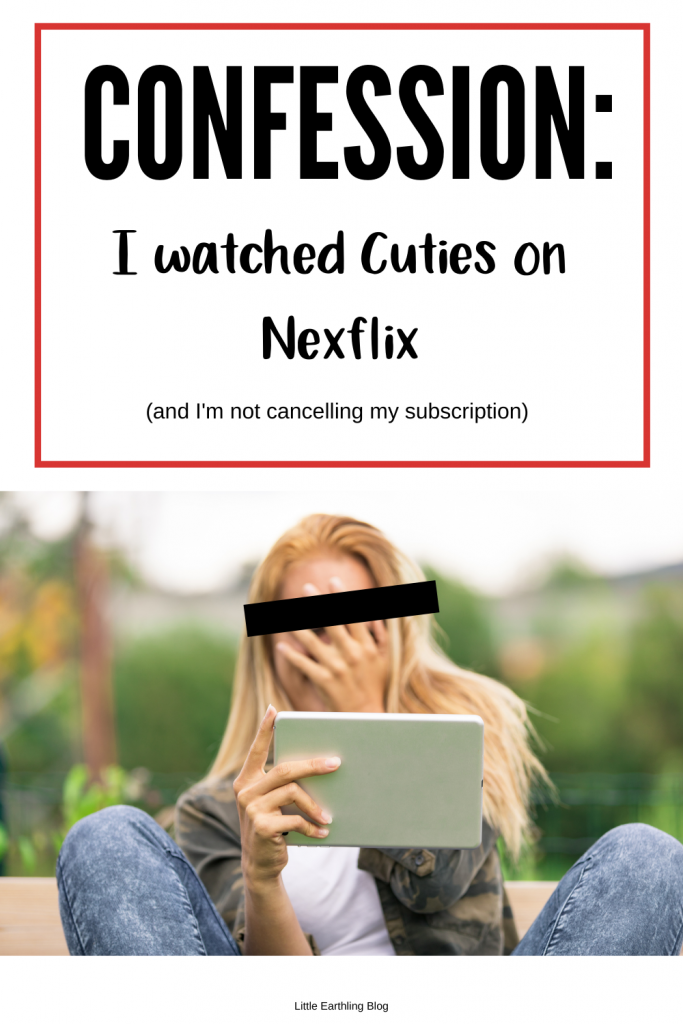 This post is full of spoilers…but I assume if you are reading this it isn’t because you want to watch the movie and see the plot unfold, as much as reading another viewpoint about the movie.

I’ll be honest. I never would have watched this movie if it weren’t for the posts and boycotts I am seeing all over social media. I have read several articles about it and assumed it was a documentary about “young girls dancing and twerking” Um, nope, I was way off base.

Cuties is a fictional movie centering around a group of 11-year-old girls living in France. The movie focuses on Amy, a young Muslim girl with immigrant parents. The family has recently moved to a new apartment building. Amy is frequently left to care for you two younger brothers (one is an infant) and her father is off in Senegal (we find out why later in the movie).

Amy is struggling to figure out where she fits into the culture outside her home. We see her in several prayer meetings and classes (presumably on the Quran) where she learns a woman’s place in her culture. The new school she attends could not be more different than her home life. At school, she is picked on at best and bullied at worst. In the midst of this, she sees an 11-year-old neighbor dressed in a crop-top and shorts dancing provocatively alone in the laundry room of her apartment building. She is mesmerized. Later Amy sees this girl at school in a posse of popular “mean girls” who are just on the edge of being real trouble makers. These girls have formed a dance group they call the Cuties and are preparing for an upcoming dance competition against some older girls. Amy wants to join them but is rejected. When she says she can learn to dance one of the girls retorts, “Learn to dress first” before shoving her to the ground.

The struggle to fit in, mean kids (in this case girls) who are best friends one moment and turning to attack each other the next. First periods, confusion about sex, their bodies. Way too much free time (where are these kids’ parents?) The are consumed with being “cool” and looking older, beautiful, like the women on social media. This obsession is a slippery slope and not everyone can hold on.

There is talk of getting a picture of a guy’s “thing”. At one point a girl (remember, they’re just eleven) finds a condom in the woods and blows it up like a balloon. Her friends FREAK OUT, saying, “AIDS people have sex with those” and refuse to go near their friend because they don’t want to get AIDS.

We see the girls trying to talk to older boys who see them as “kids”. We see them chatting online, giggling, asking a boy if he likes t*ts and if he wants to see some. One girl turns on the camera and when the guy they are chatting with sees how young they are he immediately freaks out, asking what they are thinking and why they are messaging him?

This is a social media cautionary tale if I ever read one. If I had it to do over, I wouldn’t let my kids have social media, but that’s a post for another day.

Amy steals a phone and starts social media accounts. We see her joy (and the approval of her friends) and she receives more and more “likes” on her posts. Amy starts watching music videos that include (adult) women twerking and even stripping (there is nudity in this movie). She watches intently and begins to imitate the moves, many of them highly sexual. In addition, we see her sneaking out of the house wearing crop tops and short shorts, heavy make-up. She teaches her “friends” the new moves she has learned. We see her begin to ignore her younger brother, whom she previously engaged with, in favor of social media.

Meanwhile, her friends feel like she is taking things “too far” and warn her to stop. It is clear that even as they learn these new moves, the girls are more intent on being “cool” and having boys like them, while not fully understand the very sexualized moves they are doing. They know it’s “sexy” and “boys like it” but not much more.

Amy is eventually caught with the stolen cell phone. When confronted by the owner of the cell phone (I think it’s her cousin) who appears to be in his early 20’s, she attempts to undo her pants believing that “seducing” him will gloss things over. He recoils in horror and asks what she is doing.

Amy runs into the bathroom, pulls down her pants, and takes a crotch shot which she then posts to social media to prove she is mature. Instead of tons of likes and admiration for her posts, everyone is horrified. She goes to school, gets smacked in the rear by a boy who says, “You’re the one who posted nude photos”*. She is then called all sorts of nasty words. Her friends don’t want to hang out with her because she “crossed a line” and it wasn’t okay. They are worried this will affect the dance competition and don’t want to be associated with her.

*No, this is not okay, the boy and Amy get in trouble for their altercation and under no circumstances should a boy be smacking a girls butt.

Amy finds out her father is in Senegal bringing home his new wife and the entire family is preparing for her father’s wedding. Her mom puts on a brave and submissive face, but in private we see her crying about it, a scene in which Amy overhears. Amy is angry at her father for bringing home a new wife. She resents her mom for accepting it. Amy’s friend, Angelica, is struggling as well. She cries as she tells Amy she never sees her parents anymore because they are always at the restaurant. She tells Amy they have told her what a disappointment she is to them. Later in the movie, Amy is also told she is a disappointment to her family.

The Feeback Amy Gets for Using Her Sexuality is Negative

In the movie all the feedback Amy gets from trying to use her sexuality is negative. There is one scene where she tries to get out of trouble by being sexy. One man is horrified, and another is “enjoying the view” but is then reprimanded by his co-worker. Amy does not get what she wants or gain status once she “crosses the line” into highly sexualized behavior.

Fast forward, the day of the competition she is stuck preparing for her father’s wedding. She finally runs away, waits for one of her “friends” to go by, pushes her into a river (and watches as she struggles to stay above water- yes, it’s horrifying to watch). She gets to the big competition and takes her friend’s place.

As the girls dress in very provocative outfits (the original poster on Netflix) and twerk…the audience is horrified….maybe not the judges of the competition, but the audience members. In the middle of the dance, Amy suddenly stops and thinks of her family. Her friends urge her to keep dancing but instead, she runs home to her family.

Amy’s mom sees her and tells her she doesn’t have to go to the wedding if she doesn’t want to (a huge moment of understanding from her mom). Next, we see Amy dressed in “normal” clothes…not frumpy like she was at the beginning of the movie, not a crop top like when she was trying to fit it, but a nice fitting shirt and jeans. She goes down to observe the wedding celebration. Ultimately, she goes outside to join friends in jumping rope. As the camera pans upward, we see her smiling and jumping higher and higher. The viewer is left with the feeling that she has somehow found a balance (for now at least) between her strict Muslim culture and the pop culture just outside her door.

Cuties is Both a Coming of Age and Cautionary Tale

Is this a movie I would let my kids watch? No. Am I, personally, okay with girls dressing provocatively and twerking? Nope. Am I personally okay with this movie? No. Are pedophiles going to love this movie? Probably, especially if young girls are their thing *GROSS*

This movie shows how fragile young girls are and the very real damage social media and our sexualized culture is doing to them. It is clear throughout the girls are confused about their bodies, sex, sexuality, and how to fit in. Think Stand By Me, but with girls in the age of social media and anything-goes-sex.

French director, Maïmouna Doucouré, talks about her inspiration for the film. She talks about watching performers on the street. “At one point these young girls took the stage and danced very well,” she said. “But it was also very disturbing to watch because they danced like adults, like we see in music videos. So I started wondering whether or not they were conscious of the message they were sending with this sexualized dance.

If You’re Not Okay with Cuties…

Now here’s where it gets hard, my friends. No, I’m not okay with the movie, the dances, the outfits…but I have personally seen dancers and cheer teams dressed just as provocatively. You can make your point that those girls in cheer and dance are not twerking (they’re not) but I have seen pre-teens in heavy make-up, sports bra tops, and skin-tight “boy shorts” for both of theses. To make my point, I even googled “competitive cheer for 11-year-olds”. Some of the results were fine…some were every bit as bad as the outfits in Cuties. The picture that upset me the most? A team with the pre-teen girls in sports bras and boy shorts…the two boys on the cheer team in baggy basketball shorts and tank tops. And yes, that was the uniform, the same logo was on them.

Here’s the deal, this is not a rail against competitive cheer or dance, it is just that I have seen equally disturbing outfits on pre-teens and don’t see the same outrage and calls to boycott. I was tempted to post a few photos here of what I found online (with faces and logos blurred out) but ultimately decided against it. Do what you like with the information, these are just my thoughts.

It’s cuties a gross movie? Yes. It probably hit a spot for viewers because it combines so many elements of childhood we don’t want to admit to (kids talk about sex, kids are confused, sexualized outfits, our culture of sex sells). I personally wouldn’t recommend anyone watch the movie. But as far as boycotting over it? I have news for you.

Now you have even more information.

Do with it what you will.

Running, Photos, Teeth and other Stuff

All in a Day: A Typical Day