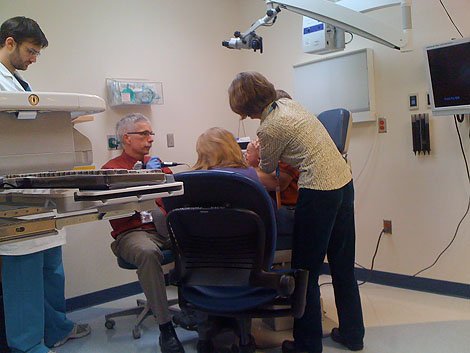 Well, we're home from Apollo's big appointment down at Seattle Children's Hospital. He was thoroughly examined by an Ear, Nose, Throat doctor.

The good news: his anatomy is all in order. No tumors, deformities, or structural issues.

The findings: his voice box and adenoids are red and inflamed, he's recovering from an ear infection and the ENT believes he is suffering from reflux.

A little research showed me these are the symptoms of reflux:

Aside from spitting up, it sounds just like him. Most reflux is apparently mild, but if this is Apollo's problem, he obviously needs medication for it, since is still isn't gaining weight (his weight today was down to 16 pounds 6 ounces). Apollo has a follow up appointment with our family doctor on Monday, which will hopefully end in a prescription for some medicine to give him relief.

The ENT also believes Apollo has allergies and wants him (and by extension me) off of all dairy. He wants me to try milk first, since he said it is the most common allergen.

Right now we feel relieved that everything looked good, and very hopeful  that we can give our baby some relief.

{Whew, I am exhausted…aside from hosting Hezekiah's seventh birthday party yesterday, I photographed a birth last night, we headed to Seattle first thing this morning, and now it looks like I'll be photographing another birth tonight….don't worry, photos will follow, but it's going to take me a bit of time to get caught up!}