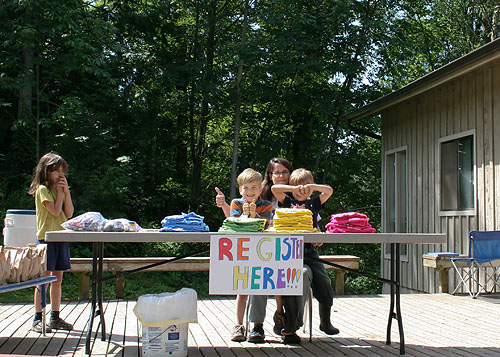 I’ll do my best to answer the questions you’ve asked….

How and why did you start doing this camp at home?

I remember reading years ago in Mothering Magazine about doing “camp at home”. Four mothers did it with their daughters. It sounded like a delightful idea! I stored that idea in my head for years. In 2007 Hilary and I decided to make it a reality. At the time we were doing Keepers at Home with our daughters, and we wanted fun activity along the lines of what their Scout brothers did. So we decided to run our two day camp and invite all of the families from our Keepers group. The best part is whole families got to spend the weekend together, getting to know each other better. Children and adults alike forged closer friendships over that weekend. 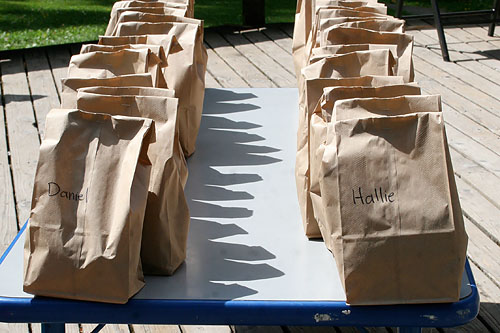 How long does it take you to plan the camp?

This is a tough one to answer. Who knows how many hours we spent brainstorming and planning our first year? The next two years we used approximately the same schedule and same meals, introducing new games and crafts to keep things fresh. This year we had three different planning/preparation days. We’ve learned a lot and things have been streamlined. For instance, year one we tie-dyed camp shirts…and that took way too long. Several of us mothers spent several hours rinsing out shirts. Year two, we did shirts in team colors and used a freezer paper stencil to put Solid Rock Camp 2009 on the back. This took probably four or five hours. Very tedious and labor intensive. This year, Hilary and I both took on screen printing as a school project. We each learned the technique and practiced it with our children. When it came to camp shirts, my children and I designed a screen, and it took less than a minute per shirt! The screen is now saved, and we’ll use it again next year. 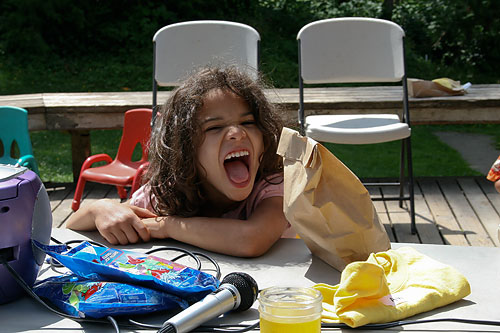 How much do you spend on camp and how do you divide the cost?

Hilary and I are both used to being thrifty. Its a necessity in both our homes, so its no stretch for us to do camp on a budget. We are both used to making nutritious homemade meals for our families, so we do that for camp too, using all the usual methods such as buying in bulk, etc. We look for new and exciting crafts and activities throughout the year and collect supplies on sale as much as possible. This year Hilary picked up nearly two hundred plastic eggs after Easter for about 19 cents a dozen. These we filled for a huge egg scavenger hunt. By watching the sales we were able to buy our camp T-shirts for only two dollars a piece! All receipts were saved and then divided per child. The cost this year camp to $13 per camper (our first year camp was $18, the second $20- so this year was a bargain!) We did have two families confirm after the T-shirts were purchased, so they had the extra expense of paying $4 per shirt instead of two. 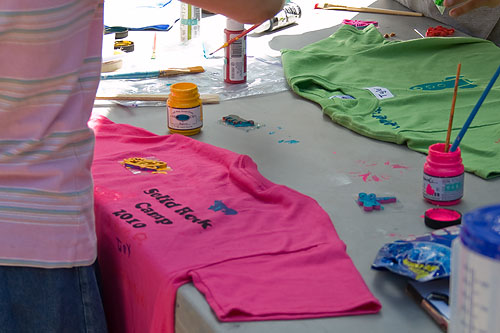 Our children, like most children, love tradition…And decorating camp shirts is a tradition we plan to keep. Several campers showed up this year in last year’s camp shirts! 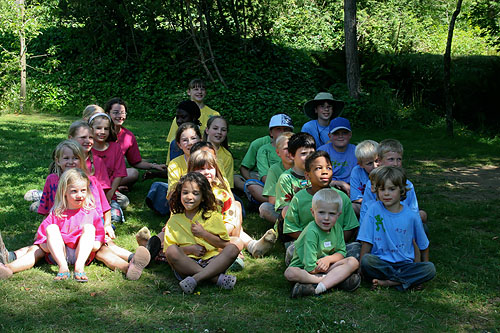 We encourage team spirit and helping others. It is a blessing to everyone to see how the older children come along side the younger ones to encourage them. The little ones look up to the older children and the older ones grow in character as they learn to include even the youngest team members. The children always come up with team names, posters and cheers. This year every team put their names on their T-shirts (we have the Mustangs, the Leprechauns, the Blue Jaguars and the Shining Rocks). 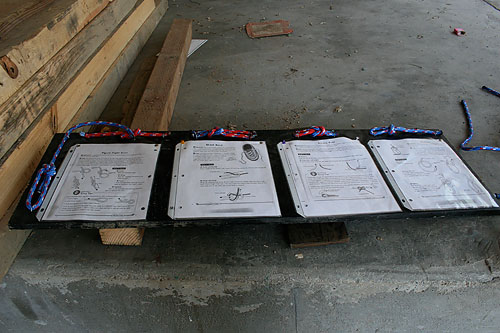 Judah (13) made this knot board and spent over an hour teaching knots to the other campers. This was a hot activity! Everyone wanted to learn to tie the knots…when they made it through all five knots, they were rewarded with their very own ropes! 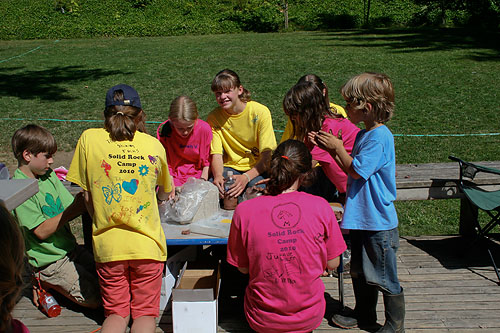 Despite what you may have experienced at other camps, our camp food is good! Or meals have remained basically the same, year to year (why fix something thats not broke?)

Breakfast- breakfast burritos (five dozen eggs, three pounds of sausage, cheese and tortillas. We made these ahead and assembled about fifty burritos in about half an hour), applesauce and hot chocolate.

Dinner- chalupa with all the fixings, popsicles 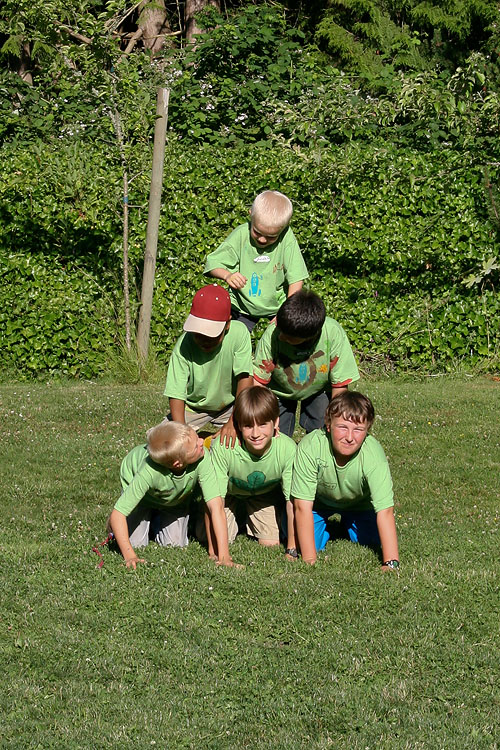 One key to the success of our camps has been parental involvement. Every family has to have at least one parent present. This way we avoid discipline issues and everyone is assigned a job (Snack Shack, crafts, kitchen helper, etc). 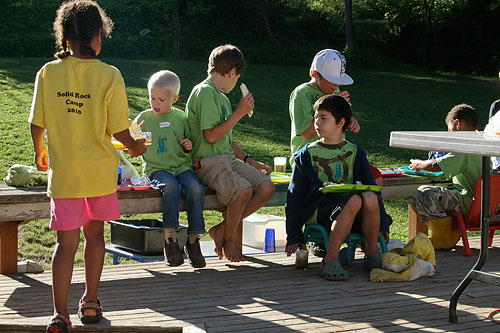 Why? Why spend so much time and energy for two days of “camp”? The answer is simple. To build memories. 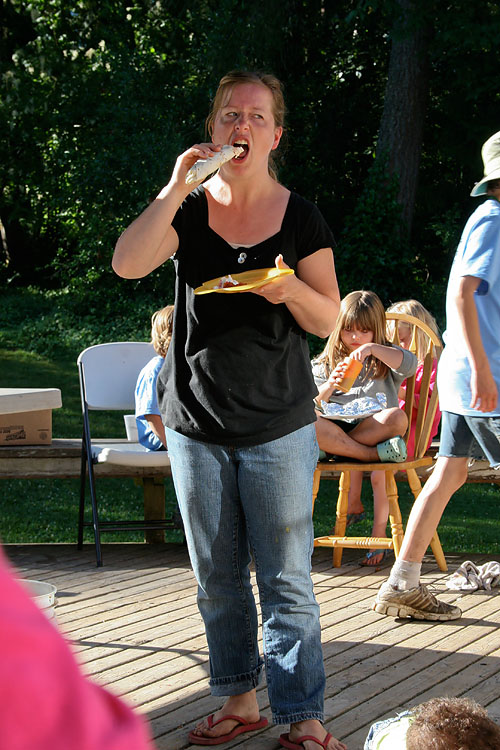 We have each team help with kitchen duties and use plastic trays. These are washed in a “dish line” outside. More than one person has suggested using paper plates for ease of clean up, but we want to preserve the camp atmosphere and feel like KP helps accomplish this. The children earn tickets for washing their dishes which can then be spent at the snack shack in the afternoon. 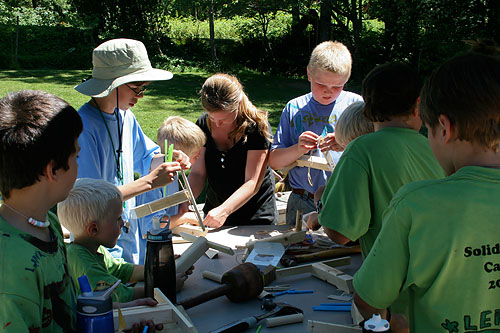 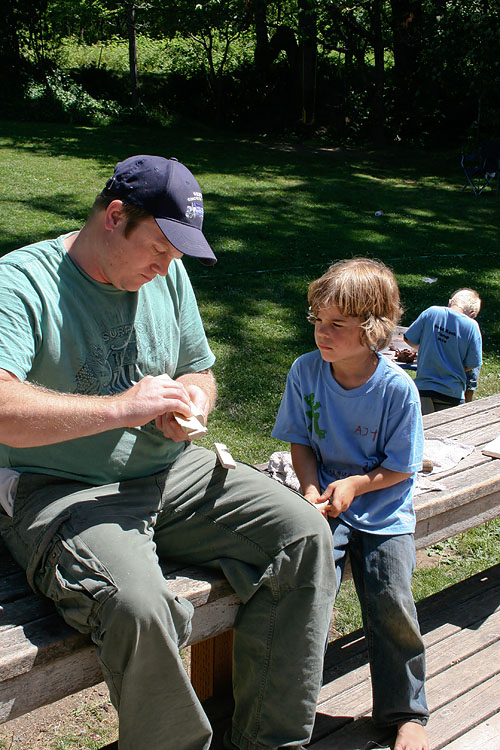 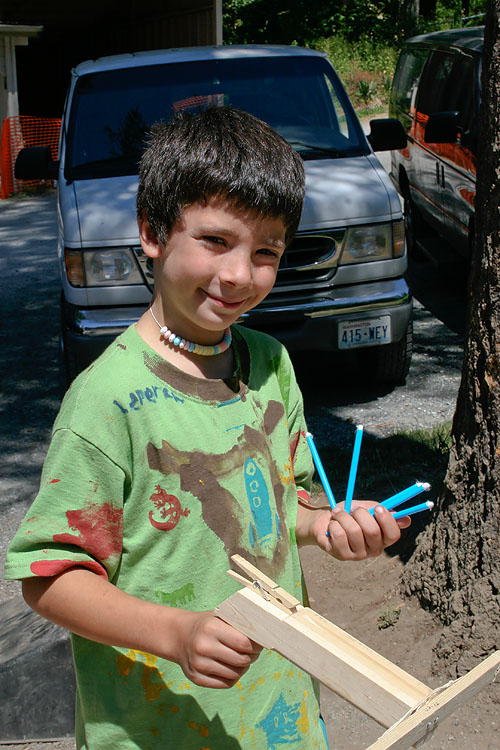 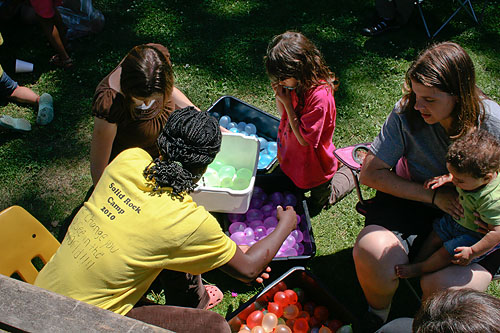