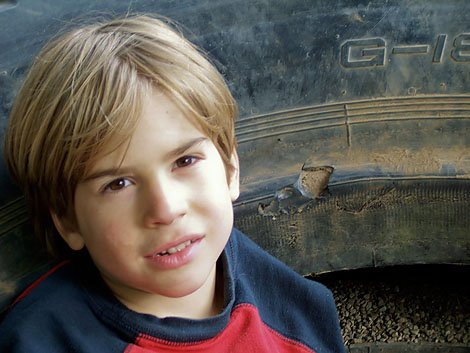 This is my son. His name isn’t really Edison. It’s Enoch. Enoch is eight years old.

You remember Enoch, my son who by all appearances could barely read at age seven, but then flipped his book over one day and read it upside down with no difficulties whatsoever? Yeah, that one.

He has always been mechanically minded. He loves to figure out how things are put together. His mind is always working just like his body is always moving. I remember a couple of years ago he pushed a chair over to our pantry and spent a good ten or fifteen minutes peering at the top of the door opening and closing it slowly. Then he shouted, “Mom, I figured out how this works!” then gave me a five-minute lecture on how the mechanics of the door worked.

He is smart, there is no doubt about it. The thing is, he doesn’t fit well into the role of Good Student. It’s like pulling teeth to get him to do any school work. And before you send me comments about the value of waiting to begin “formal schooling” let me tell you this is his first year of school, and he is eight.

Today I told him approximately 532 times to do his math. He will find any excuse to slip away. He needed to go the bathroom. He was helping Tucker. He was reading to Avi. His tooth is loose. He forgot. The economy is experiencing a recession…

“Enoch, do your math!” I said. Again. “It’s too hard,” he said. Actually, it wasn’t and he knew exactly what to do. He needed to do double-digit subtraction. When I walked by two minutes later he was doing it. With his math book upside down.

This child will expend twice as much energy to avoid his work, as it would take him to just do it. I have seen him (on many occasions) walk right past the closet where an item belongs, to stuff it somewhere it doesn’t belong.

Don’t ask me what goes on in this boy’s head. You may be wondering at this point why I try to force it. Why make him do this math…well, I can’t really say to my other children, “Enoch doesn’t have to do school work because…um….he’s like Thomas Edison and Albert Einstein. Smart, but not really into book work. So he can build with LEGO instead”. If he were my only child, perhaps we could skip all the book work and explore the world of math together. As it is, I have nine other students, plus my preschoolers. He needs to learn to get with the program.

If he were in school, he would be a troublemaker. I have no doubt about that. He likes to joke and make people laugh. He’s handsome and charming. He’s witty. A great kid, but not Good Student material. I look at him and it confirms to me my long-standing belief that good grades have very little to do with intelligence.

And while Edison and Einstein were both brilliant, I don’t believe they were easy to raise. And so I take a deep breath, drink another cup of coffee and continue raising Edison.