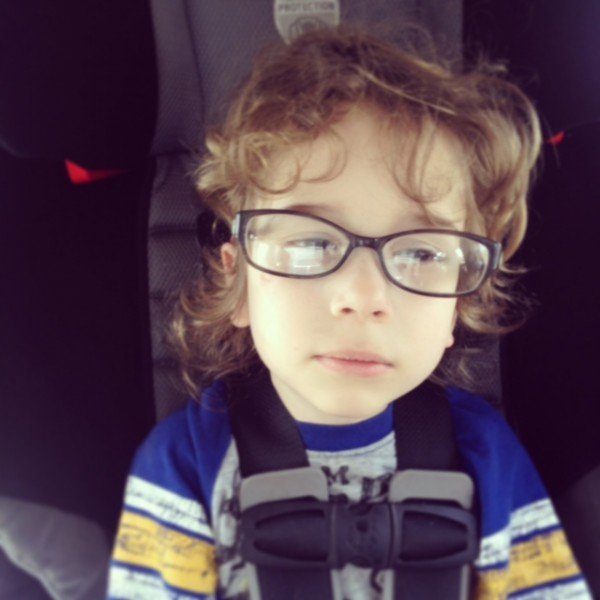 It should have been so easy. We just had a few errands to run.  So we did what parents have been doing for generations; we loaded up the kids in the van so we could complete a few tasks on this beautiful Saturday afternoon. That’s not too much to ask, is it?

In this family, apparently it is.

We left the house as 2:30 in the afternoon. I was so on top of things that I inspected the children’s clothing before I let them in the van. No child of mine was leaving this house mismatched or unkempt. No sir.

First stop Walgreens to drop off a Redbox movie and grab a water bottle for Apollo. Normally we wouldn’t run in and grab water for our preschooler, but one of the extra “bonuses” of having a tube-fed child is that when he gets dehydrated his stomach rejects anything new added. Forcefully rejects anything. In other words, he vomits explosively. And we like to avoid that. When we can.

Next was the library to return a few books and pick up my holds. In fact, I almost took a photo of my “new” books to post on Instagram with this caption: Oh happy day! New library books. Am I the only one who posts imaginary photos their Instagram account? Oh please, please tell me I’m not…

And the day just kept getting better, because next Chuck drove to the Apple store where we purchased a new battery ($50 installed!) and LifeProof case for my iPhone. It was in the Apple store parking lot that things began going down hill…Apollo needed to use the bathroom. No problem, Kalina took him into do his business then headed back into the van.

When I got back in the van, I was hit by the aroma of sweaty armpits, dirty socks and the unknown scent that comes along with multiple kids. It wasn’t pretty. I was also greeted by a child telling me they needed to use bathroom.

My husband, at times, has a flair for the dramatic. We do not, in fact, endorse wetting your pants.

On we drove. Chuck needed new work pants and was in and out of the work store in about six minutes. And the entire six minutes was filled with moaning and groaning about needing to use the bathroom. By now, Apollo had taken up the chorus as well, only now he had to go number two. Judging from the smell in the van, he was serious.

On we drove. Down the freeway for miles. We had issued the usual parental warnings: stop fighting, don’t touch your sister, look straight ahead and no talking. Along with a few that are unique to our family, such as sit on your hands and put your clothes back on. Apollo kept up his song and dance about needing to, well, poop. We deviated from our route about five minutes to pull into a rest stop on the side of the freeway. No, it’s not my first choice in rest room facilities, but when you have a dozen or so kids and travel thousands of miles per year taking your son to the nearest Children’s Hospital, you learn to make good use of them.

Chuck stayed in the van and all the kids headed in to use the facilities. I took Apollo. Only he insisted on using the men’s bathroom. Unfortunately, the oldest boy with us was Mordecai and at a very immature 11, he’s not up for the task of taking a preschooler to poop in a public bathroom. Into the ladies’ room we went.

I lined the toilet and sat Apollo upon the throne….from my squatting vantage point I could see in the next stall what I can only describe as a massive bowel eruption that made Pompeii look like a small leak. Nothing was spared. Not the toilet, the walls, or the floor of my stall.  Apollo refused to “go” and began hollering that he needed a urinal. As you know, you can lead a kid to the toilet but you can’t make him go.

As I washed my hands Apollo took off out the door. I darted out after him and didn’t see him anywhere. I looked around a privacy divider just in time to see him going into the ladies’ room next door. Because, you see, he thought it was the men’s room. I was convinced this was my  ticket to freedom. He would think it was  the men’s bathroom, go potty and we would be on our way. I could see him in a stall of the otherwise abandoned bathroom…I briefly considered letting him take care of his business himself, but quickly eschewed that idea when I remembered the eruption in the last bathroom.

“Need help?” I asked. I went in and got him situated. He began to do his duty but quickly realized, with horror, that he was going to urinate as well. Horror or horrors!

“Its coming out!” he yelled. “My pee is coming out! I don’t want my pee to come out. I need a urinal!” and he began to sob. And cry. He sat on the toilet, slumped over in defeat. He had peed in a toilet when what he really needed was a urinal.

Oh, the injustice of it all.

I, being the more practical one of this duo, hoped that now he would poop. Only he wouldn’t. Because he needed a urinal, you see. So I did what mothers have been doing since the beginning of time. I told him we would talk to his father.

Back out at the van I quickly got Chuck up to speed. In he went with Apollo who squeezed out exactly two drops of urine and then refused to use the toilet.

On we drove. Our final errand was to pick up Judah from a Criminal Justice club meeting and drop him off at friend’s house. We arrived about 15 minutes late…but that was fine since they weren’t finished and we ended up sitting in our warm, smelly van packed with children for another forty-five minutes. You read that right: Forty-Five…with a capital 4 and a capital 5. By this time I had dug out one of our Your Story Hour CDs (if you don’t have these use my affiliate link and buy some now or request them at your local library. They are amazing!) While we waited we learned how Henry Ford invented America’s first affordable car.

Then someone asked if Apollo had pooped yet. This, of course, sent his bowels into spasms and suddenly he needed to poop again. Right now. Chuck said he could poop in the field (we were surrounded by acre after acre of woods and grass) only we were short on volunteers for this poop-seeking mission. So, like all moms before me, I put my child’s evacuation needs ahead of my personal comfort and took him out to poop.

Did I mention the activity Judah was engaged in was pistol shooting? For the record, we were far away from any and all shooting, it’s just that we could hear them and Apollo was concerned about  pooping where there were “gun-shooting people” out there.

In the end, I stood in a lovely field holding a young boy’s bottom high above the foliage where he at long last, relieved himself. Back in the van Kalina immediately asked if “he got wiped” I gave her a dirty look and said, “what do you think?”

Finally, at long last Judah arrived. We all got buckled and situated. We got back on the freeway. Or errands had now lasted more than three hours. The kids had been in the van the entire time except for our brief reprieve at the poop-spattered rest stop.

Two minutes into our drive Apollo piped up from his car seat.