In Full Color: Finding My Place in a Black and White World by Rachel Dolezal Review.

I want to make it perfectly clear that I am not an expert in race or race relations. For this reason, I don’t write much about my experience as the mom of a transracial family. I know full well that being a transracial family has much more of an effect on my children than it does on me. What I am is a white mother raising African American, biracial and African children. My review is of the book Dolezal wrote, not a commentary on race.

I believe this was many people’s introduction to Rachel Dolezal.

The reason this video was so shocking is Rachel Dolezal was the head of the NAACP for years. She taught African American studies and was a vocal human rights activist. In 2015 it came out that Dolezal was born to white parents. For years she altered her appearance to make herself appear Black (her preferred term) and led people to believe this was true. Despite claims that she has always “identified as a Black woman” she once sued her Howard College when she was denied a teaching assistant position based on race (that race, being Caucasian). 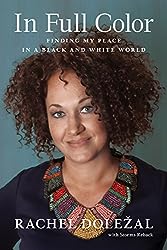 I’ll be honest, Dolezal alienated me on the first page of her book. Her opening line is, “People always ask me what it was like living as a Black* woman.” It is that little asterisk next to Black that got me. In the note on the bottom of the page Dolezal says, “Like numerous linguists and academics, I believe “Black” should always be capitalized when referring to culture or ethnicity…” I agree with Dolezal on this. She goes on to explain in a bit more detail and then says this, “I don’t capitalize “white” because white Americans don’t comprise a single ethnic group and rarely describe themselves this way, preferring labels like “Italian American” or “Scotch Irish”. I don’t agree with this.

I don’t know who Dolezal hangs out with, but when describing my ethnicity I would say White or Caucasian. I would never say something like Italian-American and personally, I don’t know anyone White would describe themselves this way,  though some probably do.

Dolezal describes her upbringing as strict and rigorous. Her parents were “Jesus Freaks” who eschewed modern technology and medicine (Dolezal says in large part because they were so poor). She describes working hard day and night with little reprieve. She talks about how as a young child she would fantasize about “escaping to Africa”.

“I no longer have all the portraits I made of myself during my childhood,  but in one that I’ve managed to hold onto, I drew myself as a brown-skinned girl with black curly braids”. 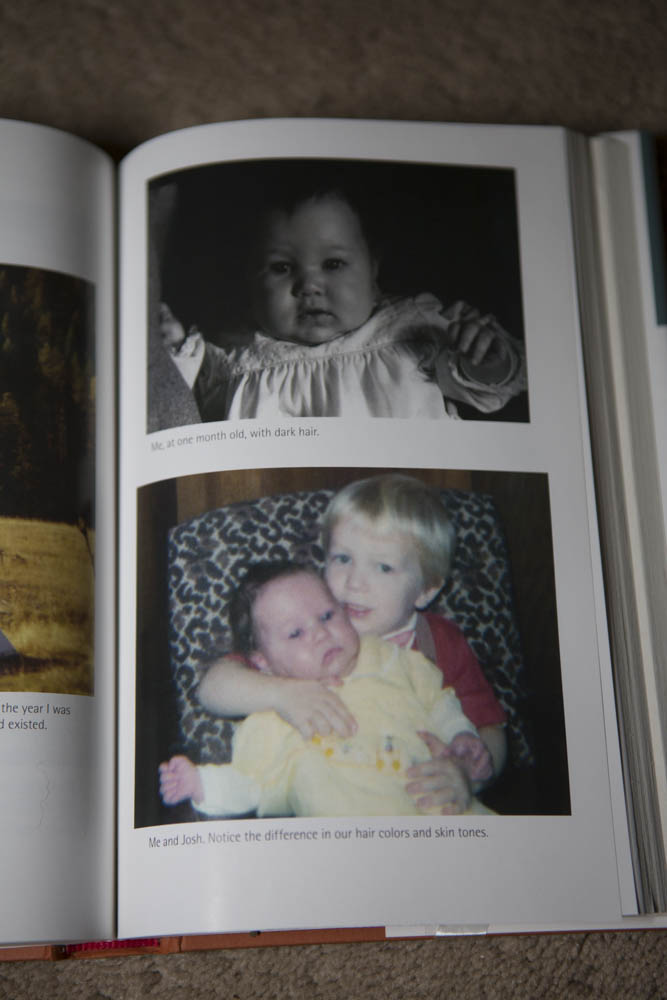 Dolezal is building her case that she as always been a Black girl inside…she also shows a picture of her as a baby being held by her older brother. The caption reads, “Me and Josh. Notice the difference in our hair and skin tones.” First of all, I have no idea where she is going with this. 1) small babies are often red which makes them appear darker and babies are more frequently born with dark hair than blonde hair. 2) She grew up to have blonde hair so I’m not even sure what her point is. That she had dark hair as a baby because she was Black on the inside?

I’m not sure since she doesn’t really clarify. 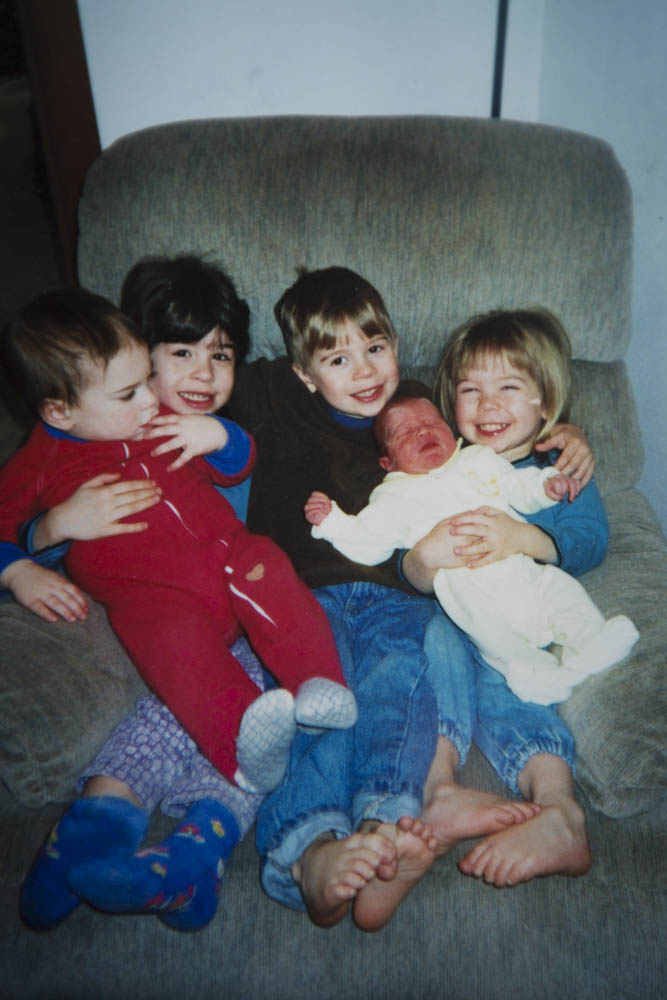 For comparison….see that “dark” baby in the photo? She grew up to be my fairest child with blonde hair and blue eyes.

Dolezal basically uses her book, In Full Color, to defend her stance that she was not passing as a Black woman but that she actually is a Black woman (on the inside). This is seen throughout her book.

“As I learned about US history in school, I empathized with those whose free labor helped build this country…” She goes on to describe the horrible treatment of slaves in our country. “For Black slaves to survive such sustained trauma took an incredible amount of inner fortitude and day-to-day resourcefulness”….in the next paragraph she says, “I developed a similar resourcefulness at a very young age”.

Yes, she compares her subsistence upbringing as a White girl in Montana l to Black slaves brought to our country. Dolezal does not seem to understand that empathizing with people’s suffering is different from living through that suffering.

In her book, she expresses disappointment at the way her family has treated her. “My brothers made all sorts of calculated yet no less hurtful allegations. On MSNBC Ezra said that I was “pretending to be Black”.

Dolezal describes her parents’ adoption of four Black and biracial children when she was a teen. She was the one who ended up care of them (of course, this is a memoir after all). She says of her parents, “Larry and Ruthanne treated each of them different [sic] based on the color of their skin”. According to Dolezal the lighter the children the better the treatment…which is odd considering she goes on and on about how abused she, a fair-skinned blond, was.

There were a few inconsistencies I caught. In chapter 5 she says, “…after being constantly teased at school about my homemade clothes, I became extremely motived to do so [earn money]. By the time I was nine years old, I was paying for all my clothes and shoes”. She then goes on to describe a variety business ventures and small businesses she came up with. Because of this, I was confused when she describes her first day of college this way, “I arrived looking like I’d just stepped off the set of Little House on the Prairie or escaped from a religious cult. Wearing a homemade ankle-length dress and no makeup…” If she was so aware of her differences at age nine that she worked and purchased her own clothing, why then at 18 would she suddenly show up at college in homemade ankle length dress? 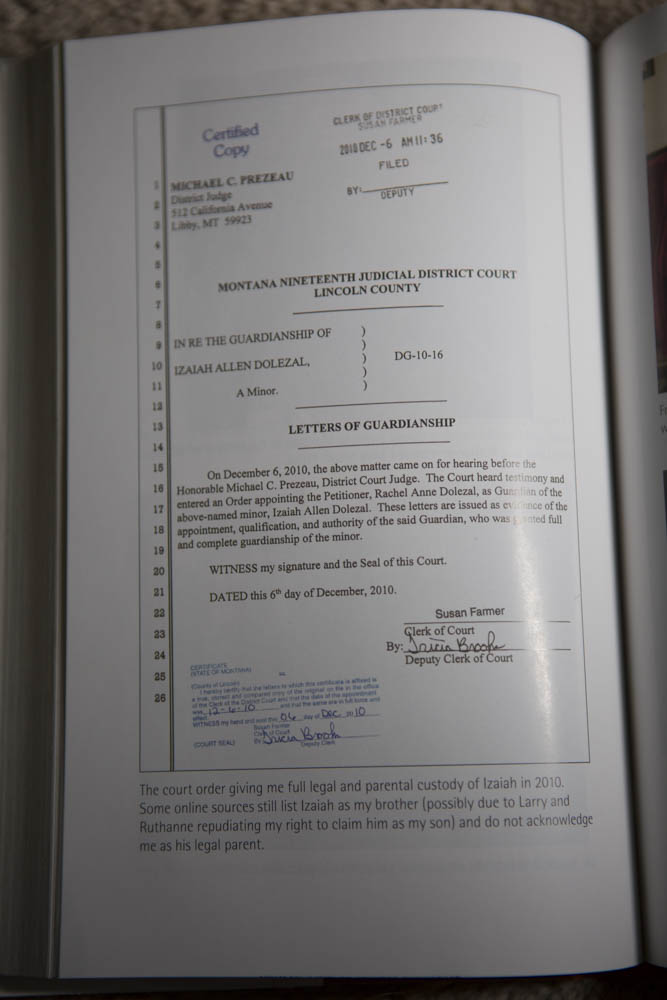 Rachel Dolezal was granted legal custody of her adopted brother, Izaiah, in 2010. Even in this, she is deceptive. Dolezal calls him her son and insists she is his mother. I can understand is, she obviously cares deeply for Izaiah and spent several years caring for him. What I object to is not saying he’s her son, but using this document (as shown in her book) as proof.

Dolezal speaks of the day she was outed and its effect on Izaiah. “The exact situation we were hoping to prevent- Izaiah having to deal with the awkward stigma of having been adopted twice-had occurred, and it nearly broke my heart”.

Anyone who has adopted or fostered children knows there is legally a big difference between adopting a child and getting guardianship. The caption reads, “The court order giving me full legal and parental custody of Izaiah in 2010. Some online sources still list Izaiah as my brother….and do not acknowledge me as his legal parent“

The thing is…she is not his legal parent, she is his legal guardian.

Dolezal doesn’t seem to understand that most people are not upset that she looked Black…or “passed” as Black. People are upset that she lied about it. It is less about appearance (though there is that) and more about what she said and did. People are upset because she claims to have lived a life she never did. What amazed me the most about this book was Dolezal’s insistence that she did nothing wrong because she “identifies as Black”. She will not admit that she lied or decieved anyone. She reminds me of the time my own toddler sneaked into my birthday cake and helped herself. My toddler came to me, covered in frosting and cake crumbs staunchly denying that she ever touched the cake…

Don’t waste your money on this book. If you want to read it (like I did) grab a copy at your local library.