I Bought My Daughter Pink LEGO and I’m Not Sorry 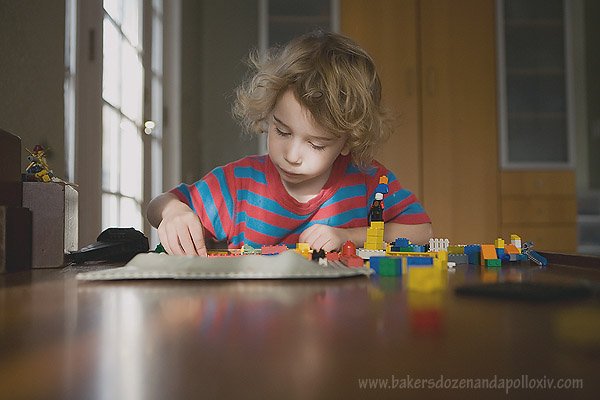 I’m going to post something a little (a lot?) controversial here. I don’t have a problem with LEGO Friends. I just don’t. 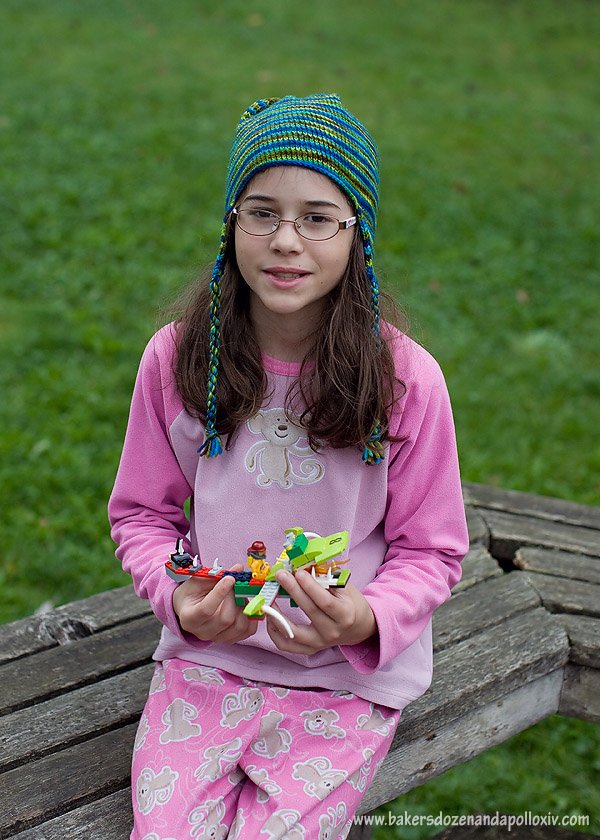 Designed by *gasp* a girl. In pink pajamas, no less! This photo is over a year old and never made it onto my blog, but is in our family album.

Let me give you a little history. I have two older brothers and no sisters. This dynamic meant that if I wanted to play with my siblings, I had to play their games, their way. LEGO was often the “game” of choice in our house growing up.  My brother David is a serious LEGO maniac. While my brother Neale outgrew his interest in LEGO, David never did. He asked for LEGO for every birthday and Christmas until he was an adult. He saved his money to buy LEGO sets. His interest never waned. occasionally people would suggest he sell his massive LEGO collection, but he still built with them as a young adult and insisted he was saving them for his little boy some day. That little boy, by the way, is now 12! 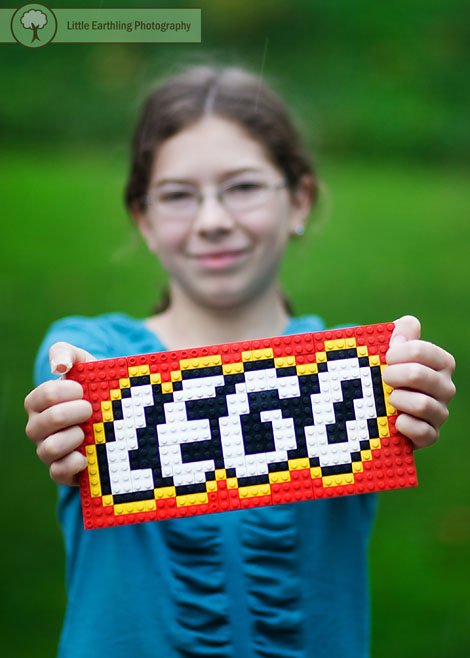 When I searched my blog for the word “LEGO” I found dozens of posts. My kids love LEGO and we have a ton. It is one of those toys I don’t mind investing in. We’ve done Unit Studies on LEGO while homeschooling. We’ve bought LEGO new from the store, used from friends and off of eBay.

If you have kids with an interest in LEGO, or you participate in social media, you’ve probably heard something of the controversy over LEGO Friends. A controversy, quite frankly, I don’t understand. The main complaint seems to be “reinforcing gender stereotypes”. I have to admit, when I first saw the LEGO Friends line, many, if not most, of the sets were…froofy.  Rock stars and fashion seemed to be the focus. A quick search of the LEGO site this morning, however, turned up a large variety of sets, including:

I’m not sure how that is reinforcing gender stereotype unless it is the color pink people are opposed to…The reality is, these LEGO sets will appeal some girls who wouldn’t otherwise play with LEGO.

I wouldn’t buy my children a “rock star” or “fashion” LEGO set no matter what the color, because those are not ideas I am interested in reinforcing. If they wanted to buy them with their own money? I wouldn’t object. The  HeartLake Juice Bar, though? You bet! Sunshine Harvest Sunshine Ranch? Absolutely. 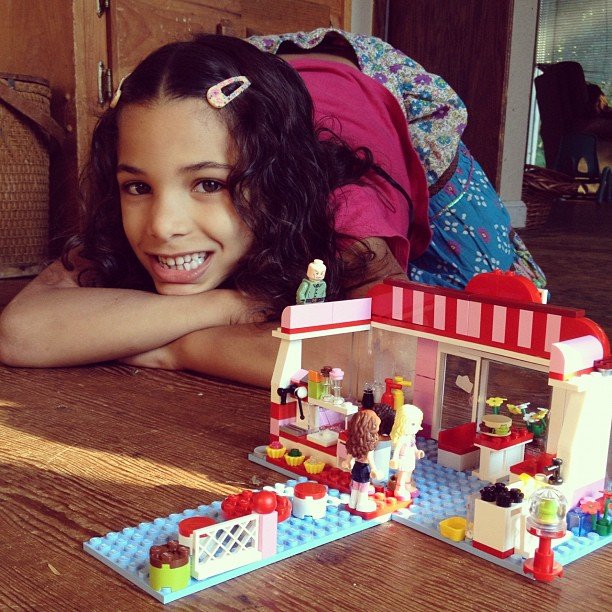 Avi poses with her City Park Cafe, a set she picked out as a reward for breaking the habit of finger sucking.

Avi reallywantss Olivia’s House, because, as she said to me: It has a mom and dad and the little girl. We checked the LEGO site for non-Friends home sets and came up with the Family House. My girls thought the house looked really cool…but were disappointed with the lack of accessories and child. That, for my girls, is the real draw of the LEGO Friends sets over traditional LEGO. A couple of years ago we bought this Education Community Minifigure set for our kids because they love all the little pieces. Tucker and Hezekiah love the LEGO Friends sets for the same reason the girls do…all the cool accessories. Pieces “regular” LEGO doesn’t have. 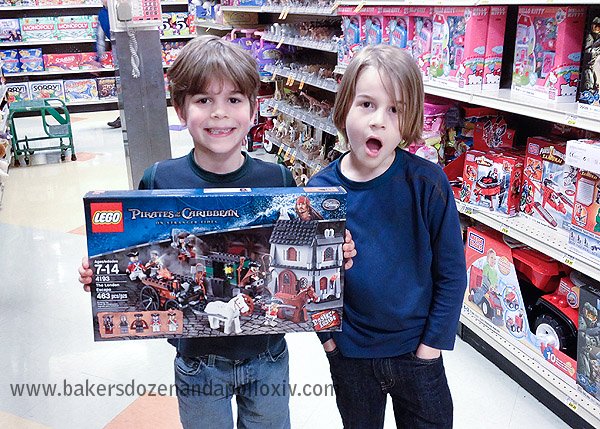 Here is a quote from the Huffington Post article that really confuses me:

I totally agree. To me, the logical conclusion is: if you have a boy who loves princess stuff, buy it for him. If you have a girl who loves superheroes, buy her that.

When Mordecai was four his favorite color was pink and he called him self the “Pink Lady”. Okay, so he had lots of pink crayons and cups and toys. No. Big. Deal. 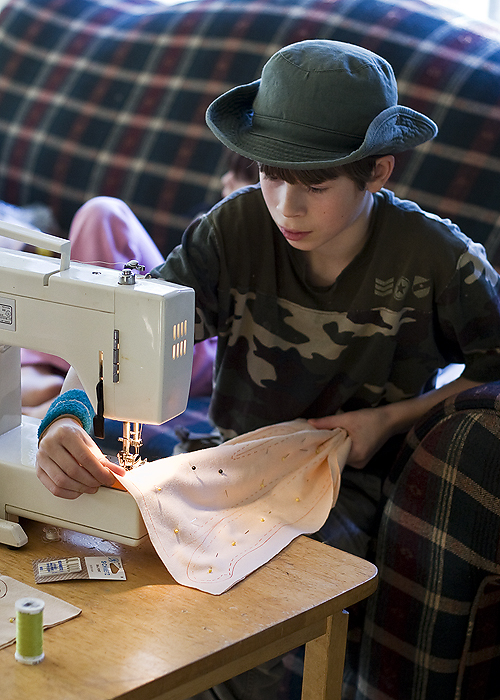 Here is a picture of ten-year-old Judah…dressed in camo sewing a doll for his brother.

My boys have been taught to knit and sew, to bake and clean a kitchen. The girls help split and haul wood. In our house, none of those things are a big deal. Not even worth mentioning.

Some of my girls are girly…and some aren’t. Some of my boys are drawn toward less traditional “boy” things, and I’m fine with that too. 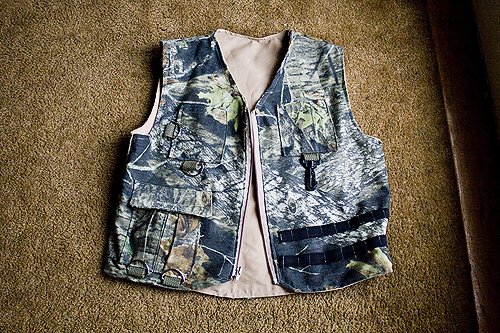 Enoch sewed this vest for himself at age nine.

You won’t find my home filled with pink or princesses. Or the toys from the latest movie. We don’t have a TV, which means my children aren’t exposed to an onslaught of commercials marketed toward children. We choose our children’s playthings with care, based on our family values, not on society’s definition of childhood, gender or success. Do we have some licensed character stuff? Sure, but it doesn’t dominate our home 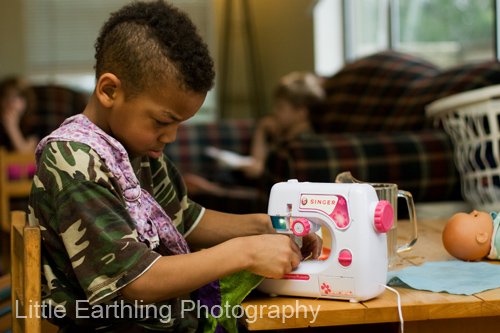 My children are not going to have their career choices limited because they played with pink LEGO. Or didn’t.  As a mom, I am concerned with my children’s character, with their faith in God. I want them to be kind and compassionate. I want them to work hard to be generous to others. I want them to find work in life that they are passionate about.

None of those things are dependent on color preferences, gender stereotypes or pink LEGO.

They are influenced by what they hear said at home.  By what they observe their parents doing. By the books we read, the movies we watch an where we spend our money.

I don’t care if LEGO is pink or black. I don’t care if my boys become housekeepers or kindergarten teachers, or if my daughters are stay-at-home moms or doctors. I want them to find God’s will for their life and pursue that with a passion.

The rest is just {pink} icing on the cake.

How to Make the Best DIY LEGO Table

5 Ways to Save Money on LEGO