The Real Life Adventures of a Great Idea

Ever have one of those times when an idea sounds like a Great Idea? Until you actually do it? The it kind of seems like The Worst Idea Ever?

Take, for instance, the idea of scheduling two of your children, with completely different health issues, with the same doctor, on the same day? Afterall, the clinic is two hours from your house. Think of the money you would save on gas! Not to mention redeeming an entire day…

But then as you sit in the office your realize that even if the doctor is a fabulous otolaryngologist (ear, nose, throat dr) discussing your 12 year old’s hearing loss and your 3 year old’s respiratory issues, discussing various tests, the results of those tests, potential tests, future tests and worthless tests may get a wee bit confusing. And you may just come home with a huge tension headache…and then have to pass all of that info on to your husband who is busy working so you can pay the medical bills. 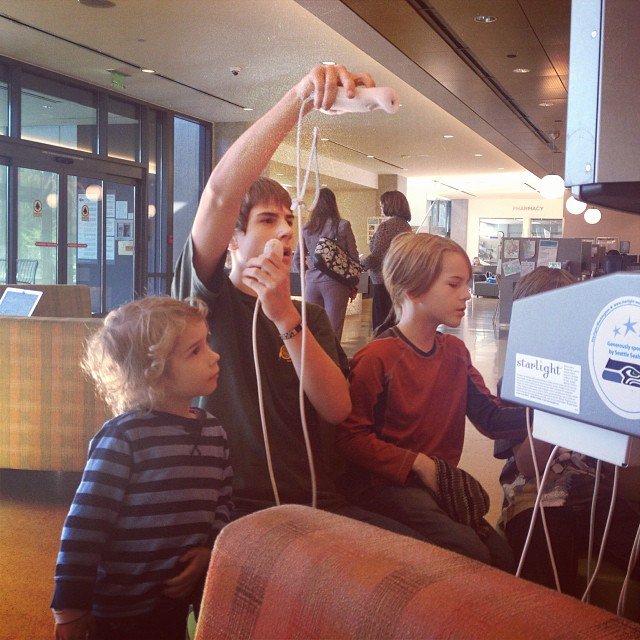 Also consider the idea of taking your newly-eight-year-old son to the LEGO store right after his siblings’ appointments. Afterall, you will already be two hours away from home, and just minutes from the LEGO store!

And this sounds like a Fabulous Idea. Until the appointments at the clinic last over two hours and your sleep-deprived three-year old is cranky and hungry and scared. And you had to walk several blocks to the clinic because  your van won’t fit in the parking garage so you park across the very busy street and decide to walk. But you have seven kids with you and look like the Duggars’ (except some of the boys have long hair. and don’t wear polo shirts. and the girls are in jeans).  You arrive and ride the elevator up two floors only to discover a sign that says: Please visit us at our new location! So you ride the elevator back down two floors and realize that you are now halfway between your van and the new location….so you decide to walk there too.

But your three-year old has to be carried the whole time because he is way too tired to walk. But at least you (read: I) live in the Pacific Northwest so there is a Starbucks in the waiting room of the clinic. Only you don’t actually get coffee because, let’s be honest, you have paperwork to fill out and kids to watch. But it smells wonderful and lends a relaxing feel to the clinic.

Then imagine finally making it to the mall in which the LEGO store resides, but you have to first locate the secret entrance the to only non-parking garage parking at the place (cause there is no way your 15 passenger van is fitting in there). So you drive for literally half an hour before you find it and finally park. Then your three-year old has a major meltdown at the LEGO store because he doesn’t understand that his seventeen cents that he has managed to scrounge from around the house won’t actually buy him any LEGO sets. And you forgot to prepare him for that. You leave with one small LEGO set for one small three-year old and look at your watch.

It is now 5:30…dinner is in the crockpot at home, but you are a minimum two hours from home (if there no traffic…and you know there is on a Friday night).  So you head into the Baskin Robbins (hoping to stave off low blood sugar issues) that you saw on the way in…and heave a thankful sigh of relief that they sell cones for only $2.07. So you buy your seven children (and yourself, of course!) an ice cream cone…only to receive dagger-like looks from the grandma wither her granddaughter. Apparently I have no right to buy eight cones when they are eager for their own cones…

I’ll leave out the details here, but Apollo will be having another sleep study, a bronchoscopy and, depending the results of those two things, his tonsils removed. His ENT is concerned about apnea because of Apollo’s “complex”  airway with multilevel airway obstruction (including laryngomalacia, trachamalacia and damaged trachea).

{ETA: his ferratin levels came out fine…ENT thinks he is so exhausted from lack of sleep…ya think???}

When Kalina’s hearing loss was diagnosed back in April it was considered: moderate to moderately severe. The test at Children’s last week put her in the: moderate to moderately-severe sloping to profound hearing loss. That’s right, her hearing in her right ear now goes all the way down to profound…meaning no matter how loudly they amplify those tones, she still can’t hear them. To be clear, it is not profound in all tones, just some.

Even though the ENT’s office called the hearing clinic up here asking for the records, they didn’t actually send them (just a summary of her visit) so we don’t have the actual audiograms to compare. I will be requesting those, along with CT scan, per the instructions of the ENT.

Kalina now has a referral to the Hearing Loss Clinic down at Children’s where she will get a full evaluation.  Due to some other symptoms (feeling like her ears are plugged, dizziness, change in hearing) the doctor thinks it is possible she may have a vestibular disorder.

And that, my friends, was my Friday.

Home Sweet Home and Brace Yourself for Photos