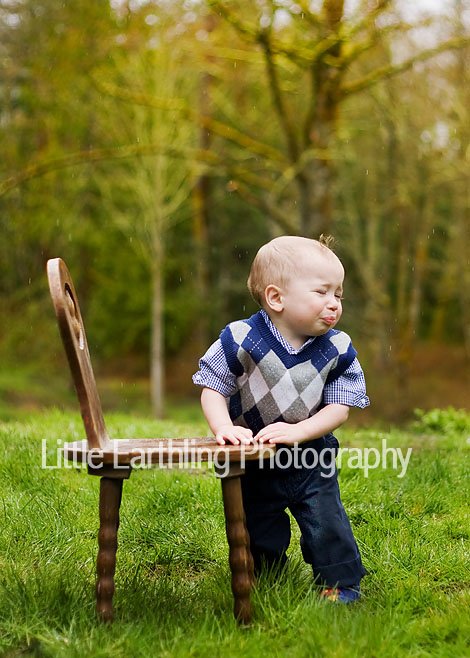 This was the one and only salvageable photo from Apollo's ten month photo shoot. Don't worry, I plan to reshoot as soon as the rain goes away. If it goes away.

Apollo is weighing in at 16 pounds 8 ounces…he's gained no weight this month.

He went to the doctor this month so we could discuss his loud breathing (which I'm convinced is the cause of his sleep issues). Our doctor sent him for an x-ray (which looked perfect). Our doctor believes the breathing is directly related to his weight gain issues, and we now await an appointment with an Ear, Nose Throat doctor down at Seattle Children's Hospital.

Apollo is as active as ever. He is now babbling away, something which delights my other children. He says Mama when he sees me, and says "hot" and reaches out his hand when he sees the wood stove or steam. These are his first two official words (since he knows what they mean).

Apollo's hair is growing and curling. I didn't even notice that I caught his curl in this photo until I put it on my computer. Adorable!