The Ulitmate Guide To Hosting An Amazing The Office Themed Party 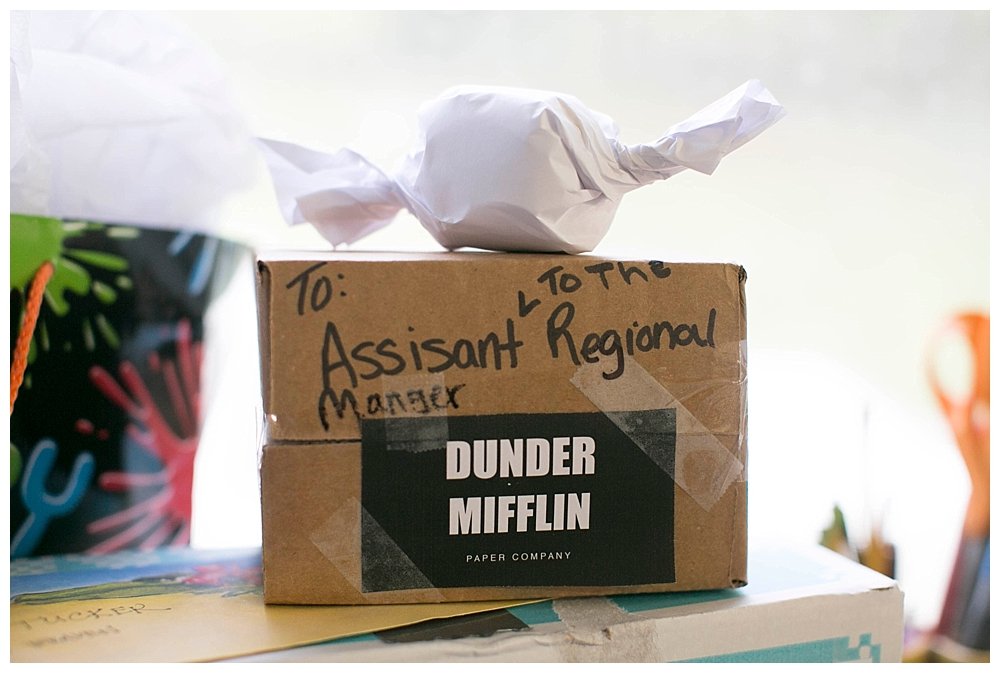 How to Host a Fun Office-Themed Party

Yes, I know, The Office isn’t exactly appropriate for thirteen-year-olds. Or eight-year-olds. And some episodes aren’t even appropriate for 42-year-olds. Despite that, the kids and I spent the summer evenings from 7 to 8 pm watching The Office. Chuck was working a bazillion hours out of town and I was done by that time in the evening. After watching The Office, I would read out loud to Apollo and (finally) it was bedtime. This “family bonding time” made Tucker’s choice of an Office-themed birthday party easy.

Warning: if you aren’t a fan (or at least familiar) with The Office, this party probably isn’t going to make a lot of sense to you.

Decorations for “The Office” Themed Party

We had a ton of fun brainstorming ideas for this easy and fun party. We bought this It Is Your Birthday sign off of Amazon. I was just going to buy the brown and gray balloons locally, but as it turns out, it is hard to find brown balloons (I never did find any), so I ended up wishing I had just gone ahead and bought these balloons. We ended up making do with white balloons and guess what? Nobody cared.

As for other Office-themed party decorations, I used my light box for the Welcome to Scranton, PA sign. I first saw the lightbox on Tilly’s blog and knew I needed one of my own.

Along with barely blown up balloons and crepe paper (from the episode when Dwight and Jim plan Kelly’s party).

Most of our other decorations revolved around food….because…YUM.

In one episode Michael brings “homemade potato salad” to a formal event. And admits it was actually store-bought.

I just bought canned beets and served them.

Instead of nerds. In one episode Dwight is eating nerds but says they are “Jims”

I think this is self-explanatory.

No Office-themed party would be complete without a stapler in jello and a Happy B-day cake with a single chicklet and the birthday boy’s name spelled wrong.

Apollo was brave (crazy?) enough to climb up on our basketball hoop and hang out there while Tucker and his friends shot hoops.

We had an obstacle course the boys had to go through with a coffee cup full of water.

Check out my The Office Party Pinterest board for more ideas and scroll to the bottom for a FREE party planning printable!

Resources to help you plan your Office-Themed party

You can visit my Amazon Storefront here and find all the products for the perfect Office Themed party.

This Man is a Pervert Printable

We bought Tucker this Schrute Farms hoodie which was on his birthday list.

A few of my kids have these Dunder Mifflin t-shirts which are, shockingly, only $9.99 on Amazon!

And just in case you missed it, here is Apollo dressed up as Dwight Schrute (more photos here). And here is a link to order everything seen in this photo (except Apollo, of course).

Check out these amazing family costumes from a family at church!