Apollo’s Trip to the Hospital or; How it All Went Down 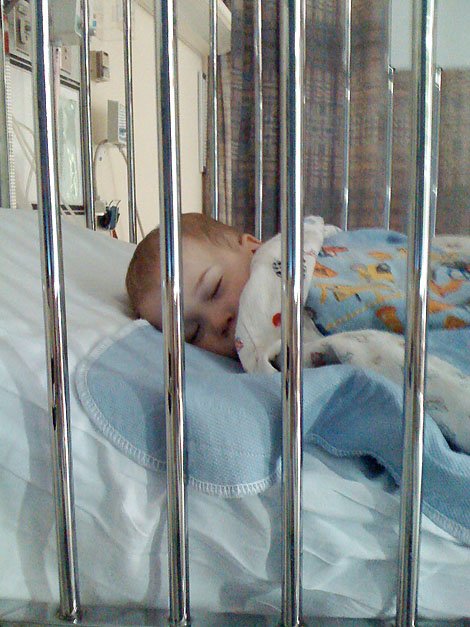 Okay, I am going to try my best to get this down in writing before I forget the details…

Wednesday afternoon I had Adalia at the Dr's office getting her immunizations for her trip to Honduras. At the very end of the visit our doctor asked how Apollo was doing.

I told him he was doing okay but had a cough…the doctor responded with words that had a profound effect not Apollo's outcome…"I'm a bit worried that the rest of the gunk from his reflux may get into his lungs  and cause pneumonia. I want to see him if gets a fever" I honestly don't know what made him say that then…it's not like this is the first time Apollo's had a cough…why was he so concerned about pneumonia now?

As you know from my blog, I came home to find Apollo on Chuck's lap with a fever. With a sigh of resignation I realized I would need to take him in the next day (on our doctor's day off of course). He did seem to be breathing rapidly…I looked him over and he seemed okay… I did choose to have him sleep in the crib in our room that night, even though his breathing is so loud it keeps me awake. I just didn't feel comfortable having him in the other room…

Thursday morning he seemed to have a cold and was more fussy, but was crawling around and playing. He took his reflux medicine just fine. At 11 AM I took his temperature (under his arm)  and it was 101.4. I gave him some infant ibuprofen and held him. By 11:40 he was feeling warmer instead of cooler so I took his temperature again and it was up to 102.3 under his arm (which means it was a degree higher than that). At that point I called the doctor's office again (they were trying to get a hold of our doctor) and made an appointment to see another doctor in the practice at 3:20. By this time he was miserable and clingy so I just sat on the couch and held him.

By the time we left for his appointment (2:50) he was breathing rapidly again. I laid him down to check and see if he was retracting a term I had read about and knew was an emergency but never actually seen. His stomach seemed hard and bloated, but he wasn't sucking in his stomach like I imagined retracting to be…he was beginning to lift his shoulders when he breathed, however. Something was "off".

By the time we sat in the exam room, I knew he was retracting and his nostrils were flaring with each breath. We spent less than five minutes with the doctor. She took a look at him, listened to his lungs and told me I needed to take him to the emergency room. Now.

It's a little bit hard to describe just how it feels to be at the doctor's office and have her tell you to take your baby to the emergency room. She asked if I need any help gathering things and I said no. Tilly was with me. As soon as I got out to the parking lot I called Chuck, then headed to the hospital.

It took less than five minutes to get there and they already had his papers ready. They took him straight to triage then right back to a room. A nurse met us there and a doctor arrived within minutes. From the time the doctor arrived, there were never fewer than four medical people in the room with us and often six or seven. They began a breathing treatment almost immediately. By now he was retracting horribly. The mood in the room was very, very serious. I could tell this was a big deal even to the ER staff. I was on the bed holding Apollo while the respiratory therapist administered the breathing treatment. The docor looked very grave and never took his eyes off Apollo, even while typing into his laptop and making a phone call to discuss Apollo's condition.

It was clear to me that the doctor was scared. He was utterly calm and in control, but his eyes revealed the level of worry he had. I sat their alternately praying and telling myself "he's going to be fine. He's in the hospital now. He'll be fine". Even though I didn't always believe it.

Two hours earlier he just seemed like he had a cold and fever…how could it get so serious, so fast?

They gave Apollo another breathing treatments, one after the other. At one point two men came in saying, "is this the baby we need to take for x-rays?" The doctor answered, "Ah, we need to do some other interventions before we do that". He wasn't nearly as worried about what the cause was as stabilizing Apollo.

After the second treatment they moved us down to an ER room with more space. In came the pediatric doctor. They started an IV with fluids and antibiotics, gave him another breathing treatment. I didn't even have a minute to call Chuck and let him know how serious things were.

Once he was stabilized and breathing, they took x-rays and tested him for RSV, drew blood, and bagged him for a urine sample. Soon after the doctor (now the pediatric doctor, rather than the ER doctor) showed me the x-rays revealing he had pneumonia. He said it looked bacterial, which is the "good" kind, since they can treat that. Before he was done talking about the pneumonia, a nurse came to tell him Apollo was RSV positive as well. The doctor was a bit surprised that he had both, but the ER doctor said Apollo was in much worse shape than babies who usually come in with RSV.

By this time (about two hours after we arrived) his breathing was finally stable and the room started to clear out a bit. Our family doctor arrived to check on Apollo and consult with the pediatrician. Shortly after Chuck arrived (I had Tilly step into the hall and call him when things slowed down). Once they were ready to admit him, the ER doctor came back and said, "Next time don't scare me like that!" 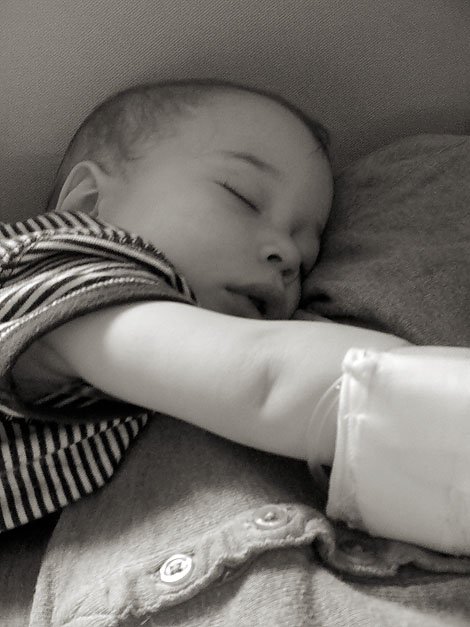 We were moved into a room on the pediatric ward and told we would be staying for 2-3 days. Poor Apollo was so sick and unhappy. He cried and cried and cried. I couldn't answer my cell phone because he was crying and thrashing around in my arms. Chuck stayed until about 9 and then headed home.

Thank you to Bridget and Jennifer for taking some children and thank you Sarah for "stopping by" with dinner. It was such a blessing not to have to worry about my other children.

Our two days and nights in the hospital were miserable. Apollo cried so much. In order for me to use the bathroom, I had to have him asleep and locked in his crib. He began to hate anyone with a mask or gown. He only slept for 15-30 minute periods all through the night. He moved around so much in his sleep that he kept crashing his head into the metal bars. 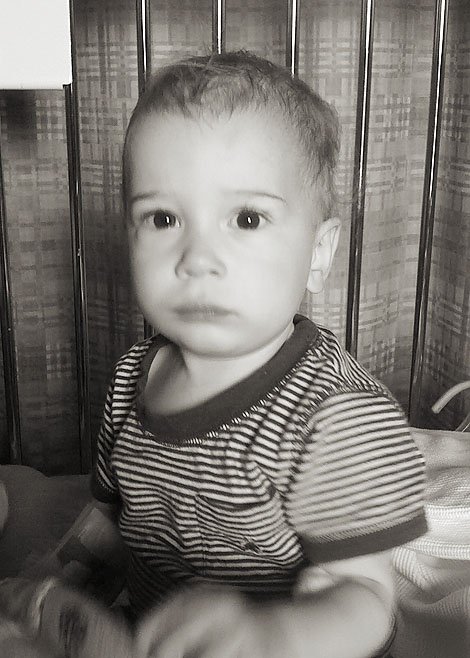 His IV's kept clogging up, so they had to adjust them. All the first night his IV alarm kept going off. When he pulled that out they stuck one in his foot. He wouldn't' bleed enough when they wanted to draw blood… 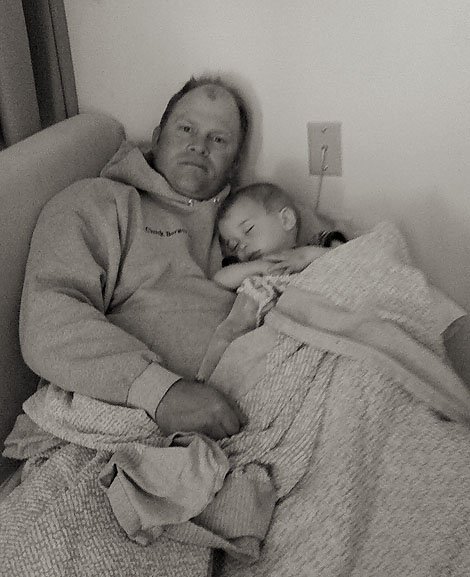 But he was alive and breathing. Once again I was struck with thoughts of "in another time or another place, he would have died…"

What if I didn't have that doctor's appointment made? At what point would I have decided he was "sick enough" to take to the doctor? Or ER? In a matter of 2-3 hour he went from sick to barely able to breathe.

The doctors believe he caught some kind of bacterial "super bug" and that's what took him down so fast. He probably already had the RSV, and then this came on. 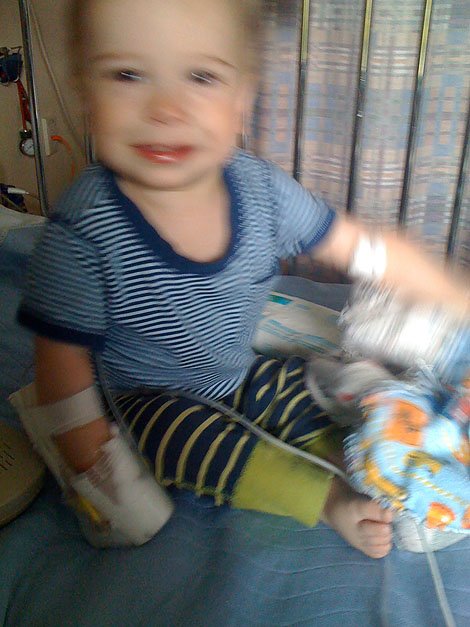 He is still a very sick baby. He lost nearly half a pound in the hospital. He is now skinnier than ever. Our doctor took advantage of him being in and consulted with the hospital doctors. The doctor on duty today told me, "we stayed up last night looking over his records and discussing his case". They strongly believe that reflux and dairy are the root of his problems. They want his weight monitored closely but expect him to start gaining when he gets better.

If in a couple of weeks he still isn't putting on weight, he'll got down to Seattle for "sweat test" checking for cystic fibrosis. That's highly, highly unlikely, but still a little horrifying to hear a doctor say about your baby.

Thank you so much for all of your kind words and prayers. They meant a lot to me in those dark hours in the hospital. Apollo has a lot of recovering to do, but is home…