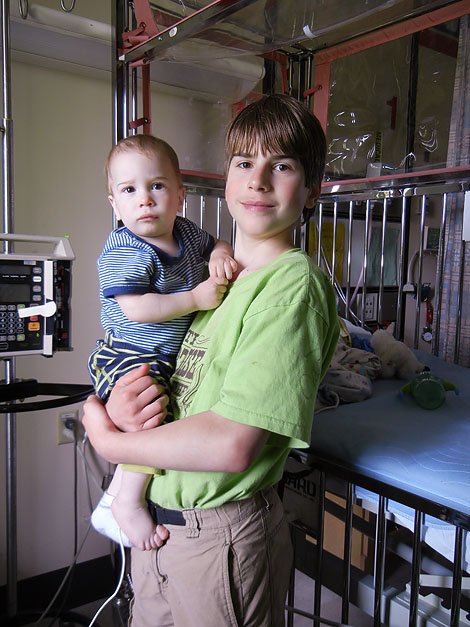 Bridget brought the three big boys by to see Apollo. He was so  happy to see them. He cuddled with each one and cried and cried when they left.

Last night when I was typing Apollo's story out, I was just trying to get the details down when I remembered them. I wanted to take notes while at the hospital, but he was so cranky and upset, I would literally only have minutes while he was asleep in his crib/cage to use the bathroom, eat and update the people praying. No time/free hands to take notes or make phone calls.

If I didn't make it clear, Apollo was released about ten o'clock yesterday morning. Since he wasn't requiring oxygen overnight, the doctor felt he would recover better at home.

Tony- yes that was a plastic cup taped over his hand to keep him from pulling the IV out. In this photo you can see the oxygen monitor hooked up to his foot and covered by his sock. 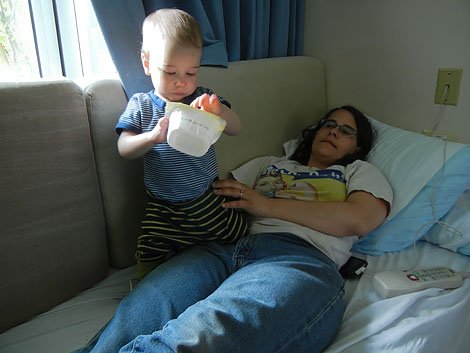 He actually looks a little chubbier in these pictures than he really is because he was still "plumped up" from IV fluids. He is skin and bones now. He had developed a little crease on his upper thighs (way too small to be a "fat roll" but it was  a start) and that has completely disappeared. You can feel his sharp little ribs through his shirts…

MC- thank you so much for the gift. I brought a smile to my face!

As did all the comments, prayers and kind words. They meant a lot at a very difficult scary time. I was so nice you know all of you out their were thinking of him. Apollo will be seeing our family doctor on Tuesday- the first time he can get in for a regular appointment due to the holiday.

He's not on a nebulizer mainly because the doctor at the hospital said if we think he needs one, he needs to come right back in.

The poor little guy is still sick and miserable, but having periods of playing and being happy. All of this went down on his eleven month birthday…now my goal is to have him: happy, healthy and gaining weight by his first birthday..

Ironically, it was just over a year ago that I posted: Opus Causes a Stir…none of us had any idea just how much of a stir he would- and still does- cause. This is one kid that is not going to fade into the background, child number fourteen or not.

Here's to a happy, healthy one year old….

The Good, the Bad and the Ugly at the ENT

RSV and Pneumonia: Back at the Hospital