The Hobbit Party: A Long Expected Party {Lord of the Rings} 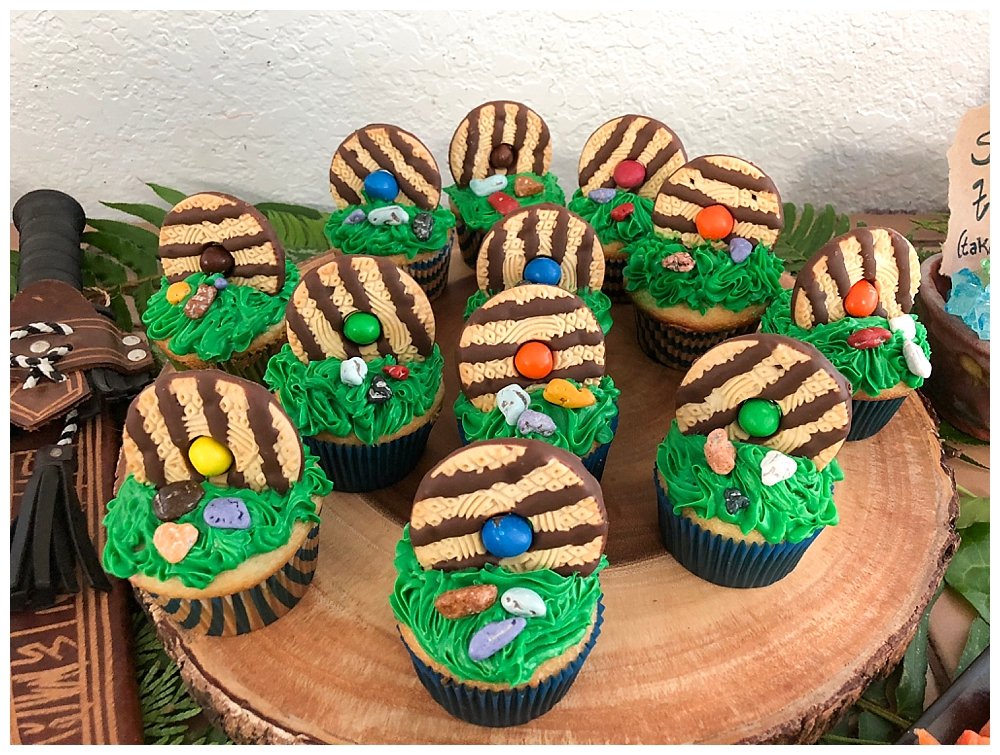 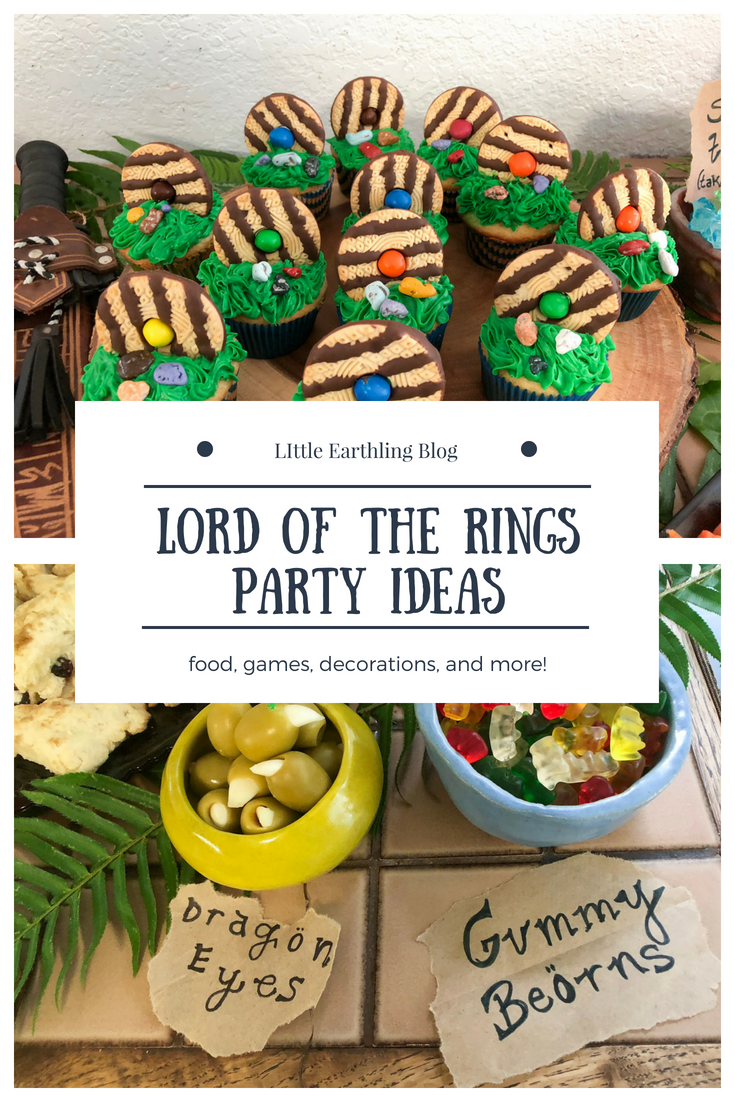 In May Apollo started hatching plans for his eighth birthday party. I had just let him watch Jurassic Park and he was HOOKED. I was initially worried that it would be too scary, but while he reacted to the jump scares, the movie itself didn’t scare him.

The next day Apollo started building his own Jurassic Park out of LEGO. This is exactly why I am a fan of a few open-ended toys rather than a deluge of toys that do everything for a kid. I ordered Apollo these LEGO-compatible dinosaurs from Amazon for less than ten bucks. It’s not often we buy toys for our kids, but I wanted to build on his enthusiasm and creativity.

So, I started planning (and by planning, I mean thinking and pinning things on Pinterest).

Then, Something Miraculous happened on the morning of Apollo’s eighth birthday…I read out loud to him the last chapter of The Hobbit.

“Mom, I kind of wish I was having a hobbit party instead of Jurassic Park.”

Apollo lay in our bed thinking for a few moments.

“But I guess it’s too late for that, right? You’ve probably already bought things for my party.” 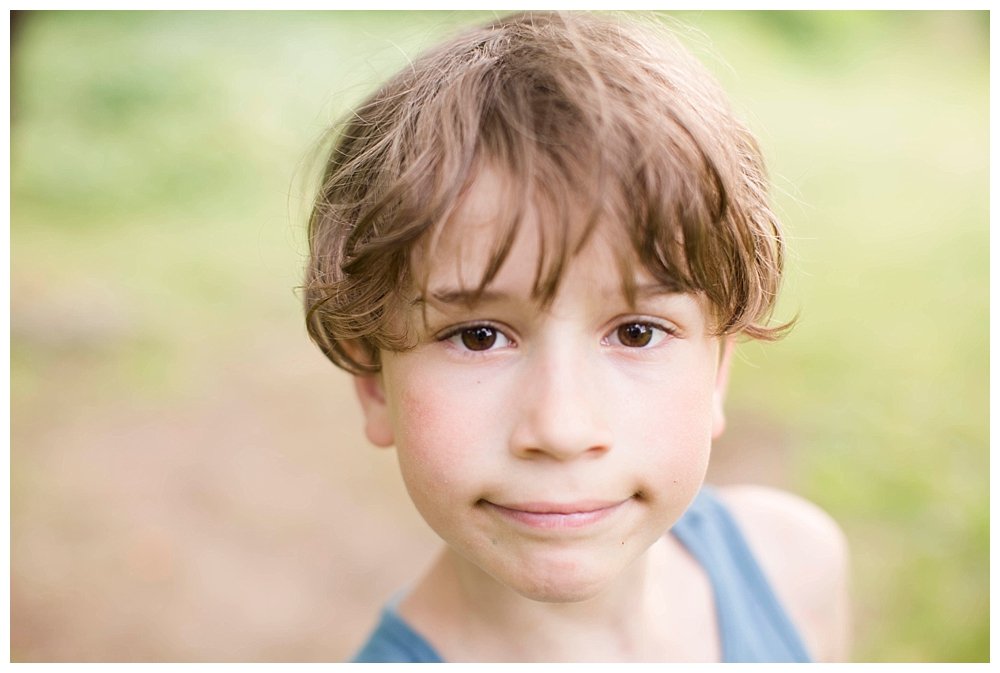 Well, friends, when you son has brown eyes this gorgeous and you haven’t actually bought anything for the party because you are a Master Procrastinator, you might just shove aside your own love of Jurassic Park and give in to your son’s love of The Hobbit.

{Okay, technically I had already purchased this Jurassic World LEGO set as a gift and a t-shirt with the classic Jurassic Park logo. But nothing specifically for the party.}

As it turns out, the decorations for Jurassic Park and Middle Earth (hello, ferns) are strikingly similar. I made a new Pinterest board and dove in.

So, with no further ado, I present to you 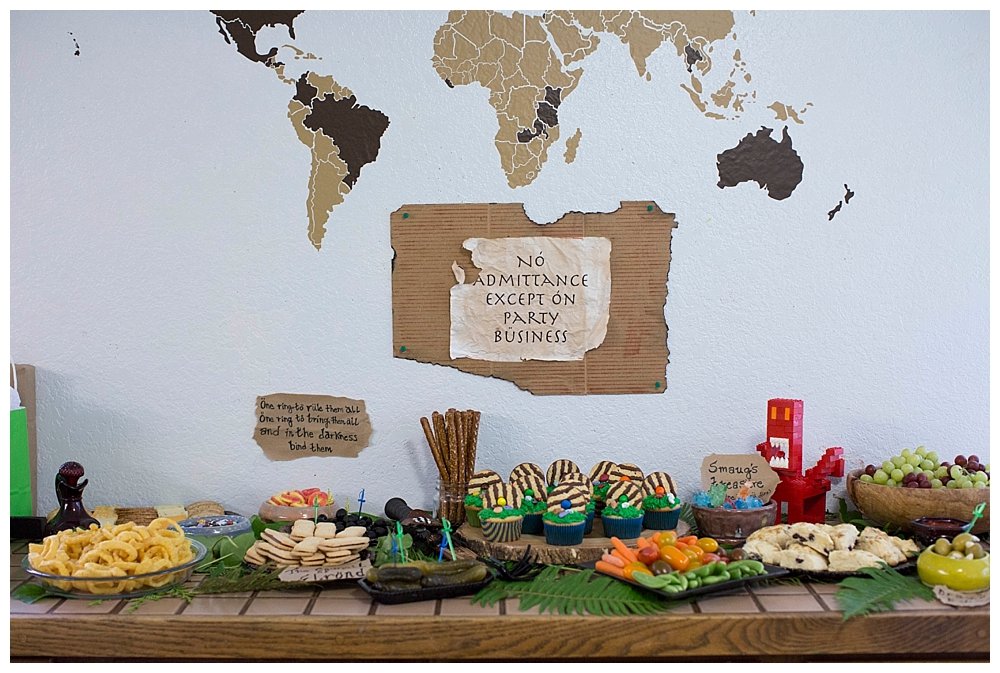 Decorations for a Hobbit Party

I am a fan of simplicity, and this party was no different. In the morning I had the boys go out and gather ferns and other plants from our property. I spread them across our countertop and put the food on top. The map you see was purchased on Etsy and has been the focal point of our dining room for years. Fortunately, it fits with the theme perfectly

As we were shopping for supplies I remembered that hidden away in our storage room is a full set of these Avon 1876 Cape Cod Glass Dinnerware. They belonged to my grandma and she gave them to Adalia before she died. Due to the weight, Adalia has not yet been able to transport them to New Zealand and they were perfect for our Hobbit Party!

We also used handmade pottery dishes that Tilly and Kalina have made.

I used cardboard and paper bags to make signs for the wall and labels for the food. 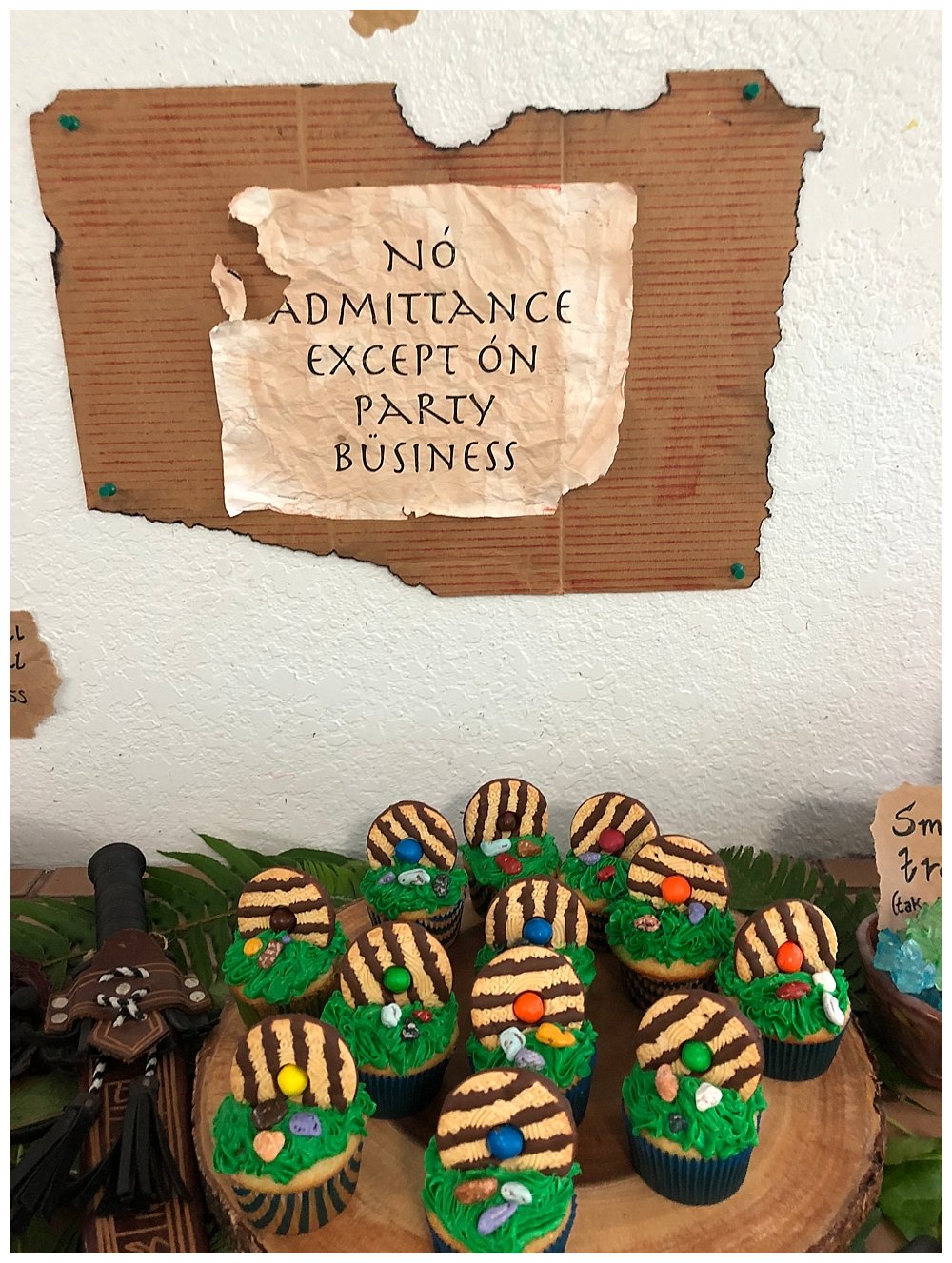 Choosing foods for our Hobbit Party was beautifully simple. We started with a variety of “tea party” foods such as: 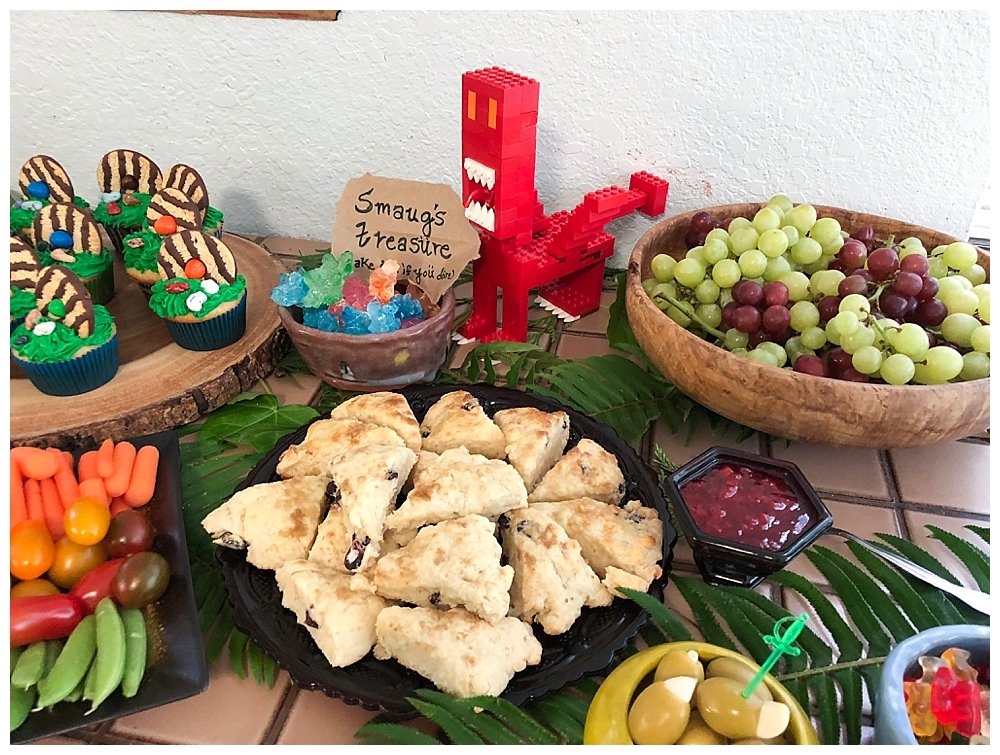 In addition to our glass plates and pottery, I used wooden bowls and a wooden slab that I use for food photography.

Other foods for our Hobbit Party included: 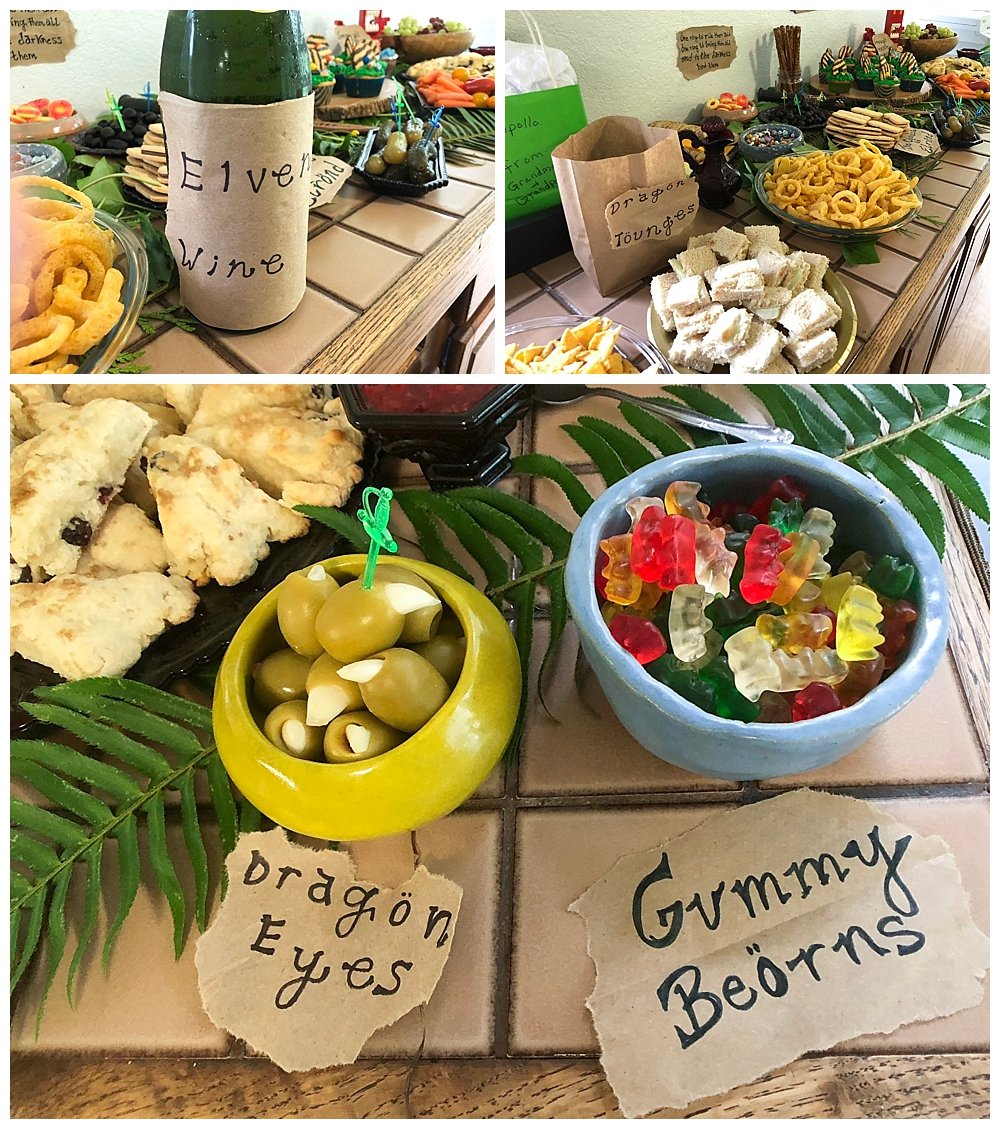 These Hobbit Door Cupcakes were Pinterest-inspired and so easy to make.

We cut a slit in the cupcakes to make the doors stand up. A peanut M&M served as the doorknob, green frosting as grass, and candy rocks as the last detail. These were a huge hit!

In addition to the giant bubbles (which had to be cut short due to rain) Tucker set up and obstacle course for the kids and Hezekiah set up a Treasure Hunt where the kids followed clues around our property to earn their share of the treasure.

I just realized I didn’t get a picture, but the treasure was chocolate coins in little paper bags with elven writing.

The kids came in soaking wet from the obstacle courses and treasure hunt. While they dried they decorated Gingerbread Hobbits.

Next up, it was time for presents! 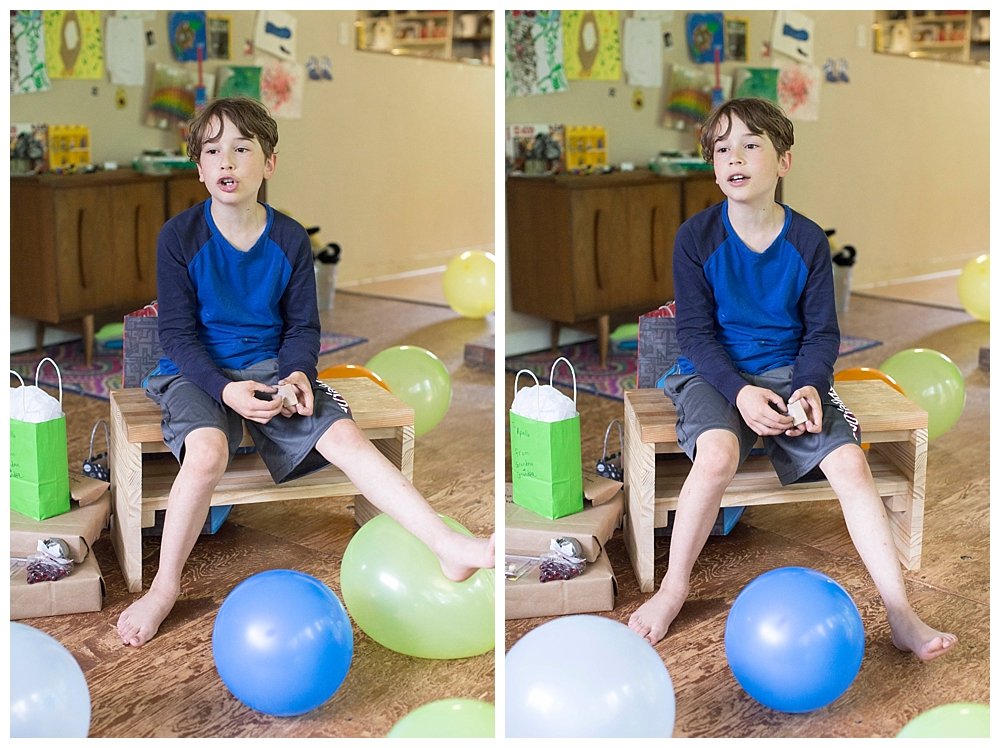 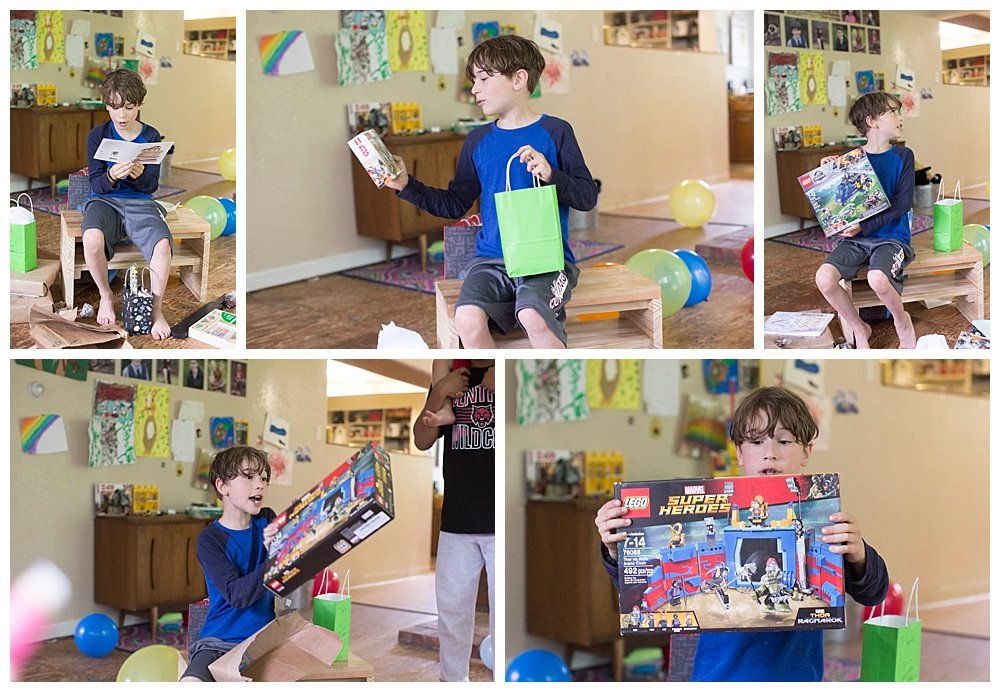 LEGO sets for his birthday…what else? 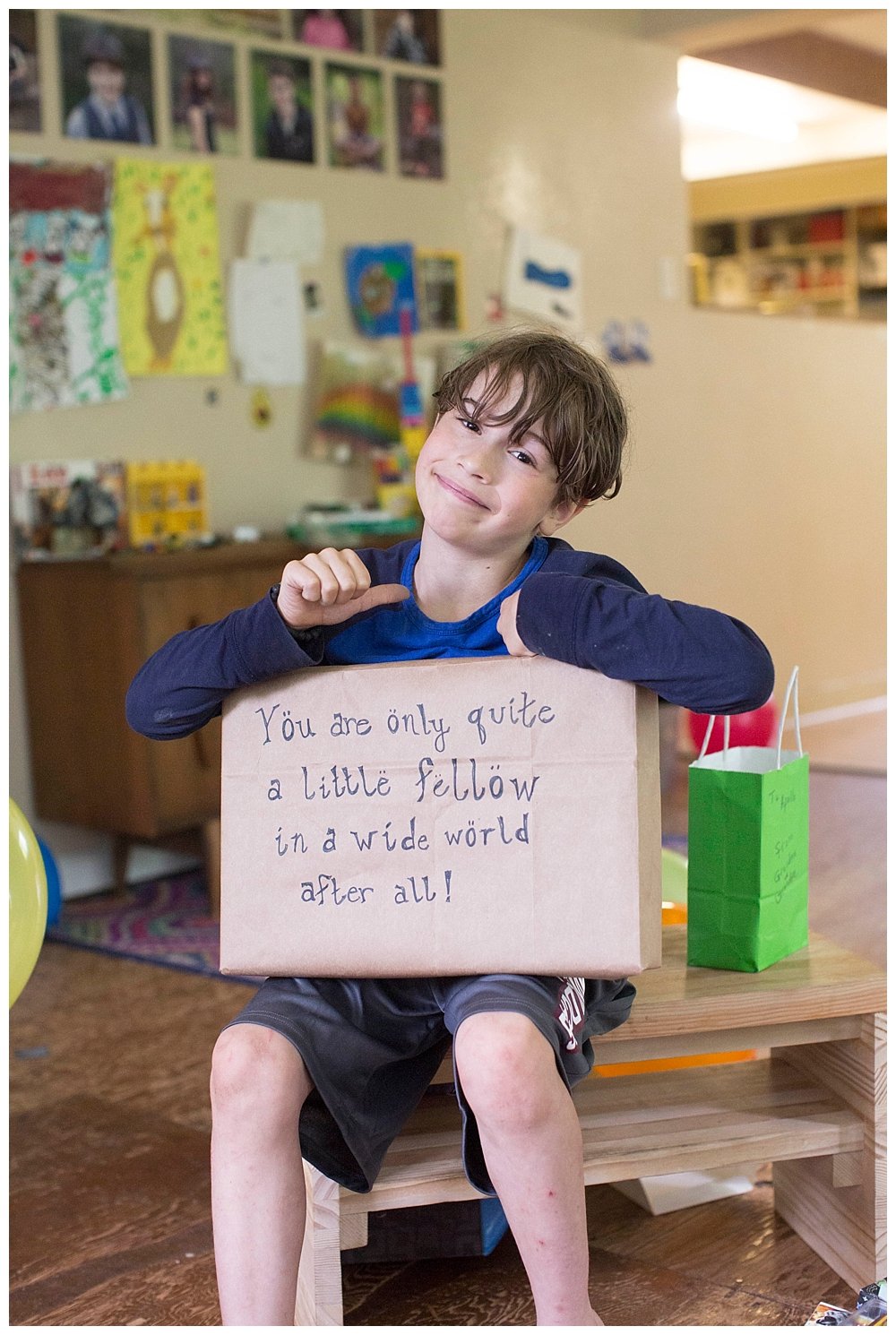 Another successful themed party pulled off! Thankfully, all of Apollo’s expectations were fulfilled and I don’t have to worry about this birthday for another whole year…