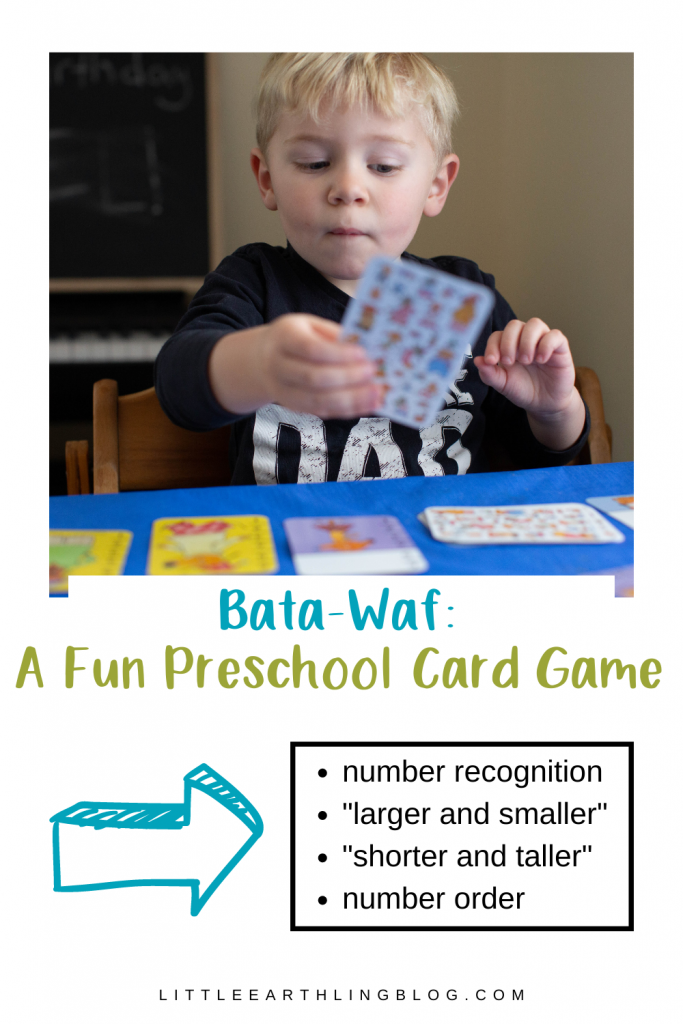 I was sent a copy of this game by Timberdoodle for review purposes. All opinions are my own.

When I went to New Zealand back in July, I brought along a couple of games that are favorites of my grandsons, P & M in hopes of playing them with Abel. One of those games was Bata-Waf.

Bata-Waf is designed for two or more players and the concept is simple. Each player flips over a card and the biggest (tallest) dog wins. If two players turn over the same card, it is a Bata-Waf and both players have a chance to win even more cards.

Bata-Waf is essentially a simplified version of War and a great first card game for toddlers. I took advantage of Juniper’s nap times in New Zealand by spending a little one-on-one time with Abel. We built with Duplo, worked on puzzles, and played a few games. Abel just turned three in June and hadn’t been introduced to the idea of playing games (taking turns, rules, winning, etc).

Bata-Waf turned out to be a perfect first game. Abel was able to easily recognize which dog was bigger and delighted in winning.

Abel just turned three in June so just understanding the “back and forth” of a game was a skill for him. Thankfully, with Bata-Waf both players play at the same time so there is no waiting.

In the beginning, I simplified the game for him.

To simplify I eliminated the “bata-waf”. When two players put down equal cards, it is a “bata-waf”. At this point each player places two more cards face down, and then flips a third card over. The player with the biggest dog wins all of the cards. This was confusing to Abel, so we often skipped this when playing. Instead, we would just turn over a new card, and the one with the largest won.

Another way we implied it was to just find the matching cards. Abel loved laying out cards and finding the matches. Another of his favorite simplified version was for me to turn over the cards one and a time and for him to yell out if it was bigger than the previous card.

Don’t be afraid to simplify games for your little ones! Over time you can build on their skills and add in other rules.

Like nearly any game played with preschoolers, there is plenty of learning going on with Bata-Waf.

Other Fun Games to Play with Your Preschooler

Activities to Engage our Preschoolers

What are your favorite games to play with preschoolers?

How to Find the Best Pencils for Preschoolers
Tagged games, math gamees, preschool