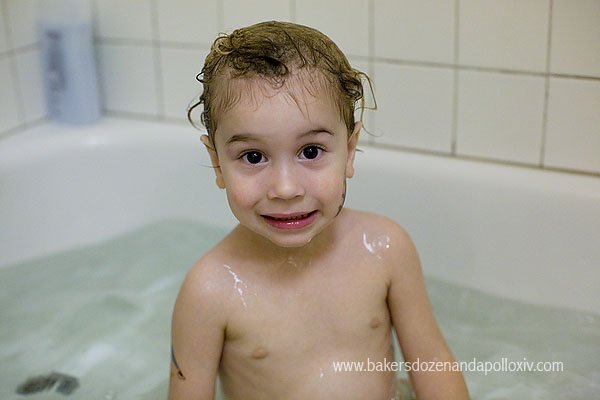 March 6, 2012- the night before Apollo’s first double aortic arch repair. He was 20 months and weighed 21 pounds. 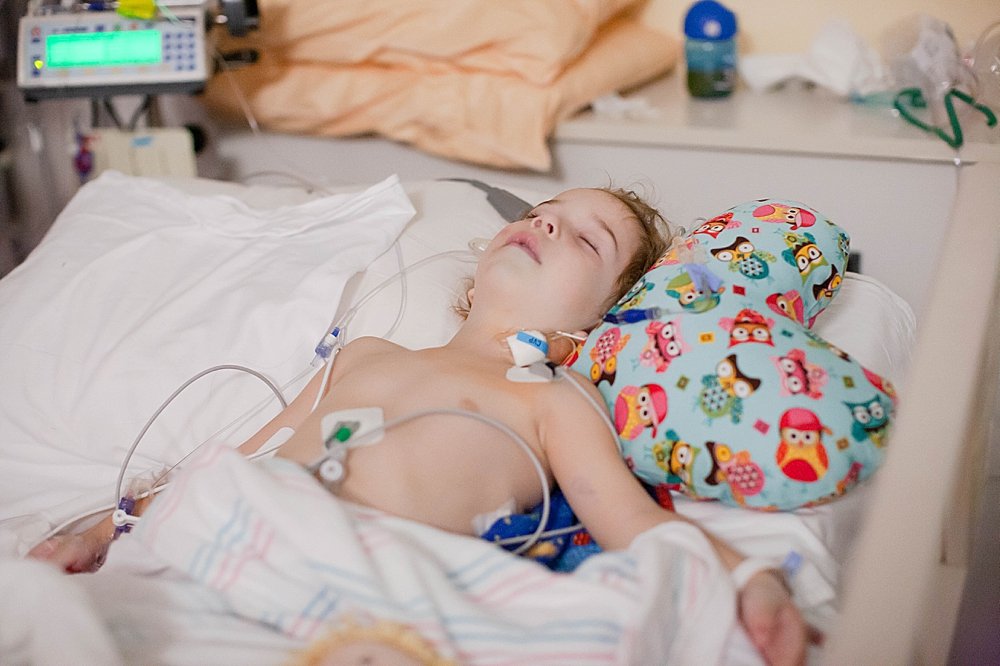 The Cardiac-Vascular Intensive Care Unit (CVICU) was full the day of Apollo’s double aortic arch re-operation. The surgeon, Dr. M, elected to do the surgery anyway and send Apollo to the Pediatric ICU instead postponing the surgery. We were so thankful he chose not to postpone. In this photo you can see the central line in Apollo’s neck. It was huge and held in with three stitches. After they were taken out he looked like he’d been bitten by a vampire. 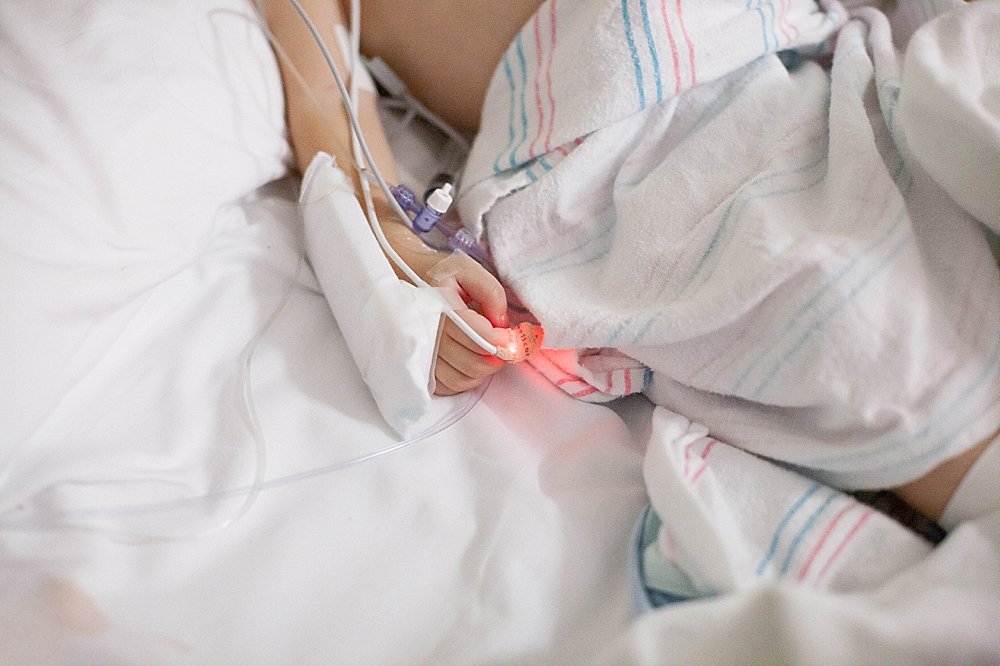 So many medicines to try to tackle his pain. This poor boy is hard to manage. 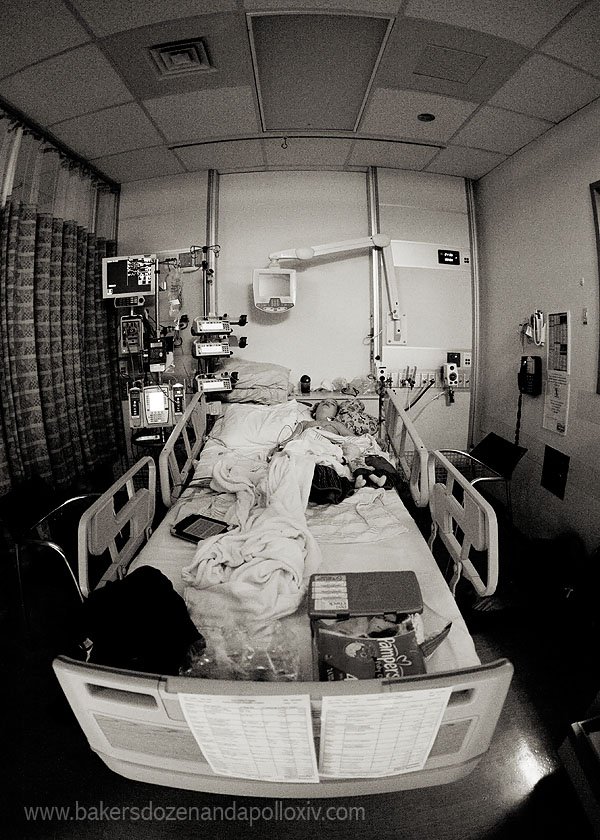 A little boy in a big bed.  Still in the PICU.

Never Give a Cardiac Patient a Blue Popscicle

Taking a rest after snacking on Cheerios and popsicles. The nurses learned an important lesson with Apollo: never give a cardiac patient a blue popsicle. The first one they gave him left a faint blue tinge around his lips and mouth. It was scaring every nurse and doctor who walked into his room! 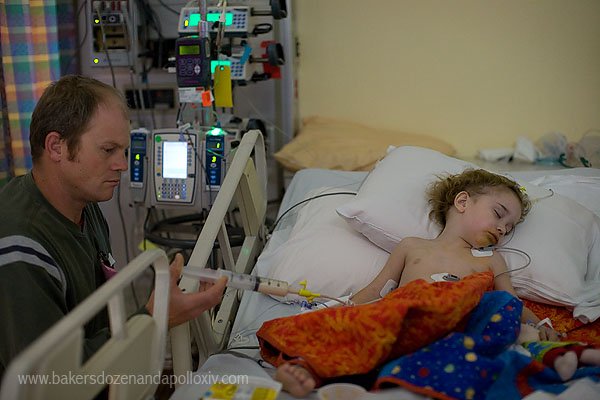 Apollo’s first feeding after his surgery. He only had one or two feedings of his soy formula before they noticed the chyle in his chest fluid and switched him to  Enfaport…which he promptly began vomiting up… and hasn’t quite stopped yet.

Apollo had some physical therapists come in and help him sit up for the first time. Not fun after a thoracotomy. He cried and said no, no…it was so hard to make him fight through the pain to sit up and “play”. Initially he needed help and support from pillows.

Here you can see that even though he’s “playing” with toys, he isn’t having much fun. 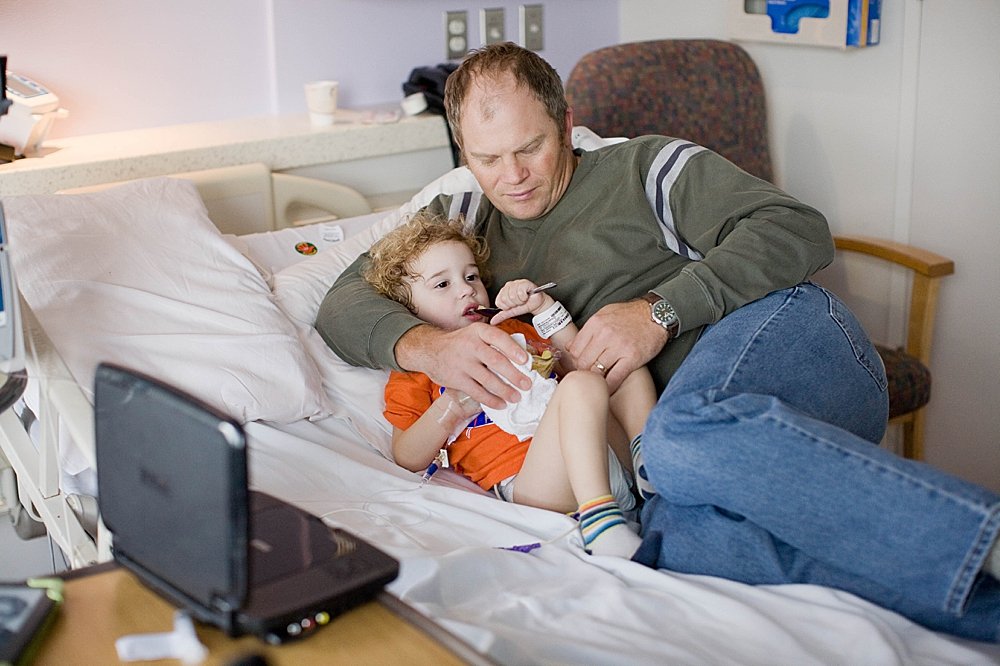 Stepping Down from ICU to the Cardiac Floor

After two nights in the PICU we got moved to our own room on the 15th floor. I loved this about Texas Children’s hospital. The 15th floor is reserved for patients recovering from heart surgery, all of the nurses are cardiac nurses and the rooms are all private. Finally I had a bed to sleep in. Or so I thought. Apollo would have nothing to do with me sleeping in a bed two feet away from his. As a result, we shared this bed every night. After Chuck left Tilly slept on the sleeper couch in our room and I remained in Apollo’s hospital bed.

Oh, and I can’t even begin to tell you how awkward it is to wake up at 5 am with a doctor leaning over you and examining your child. Then trying to have a semi-intelligent discussion with said doctor as you lie there in your pajamas… 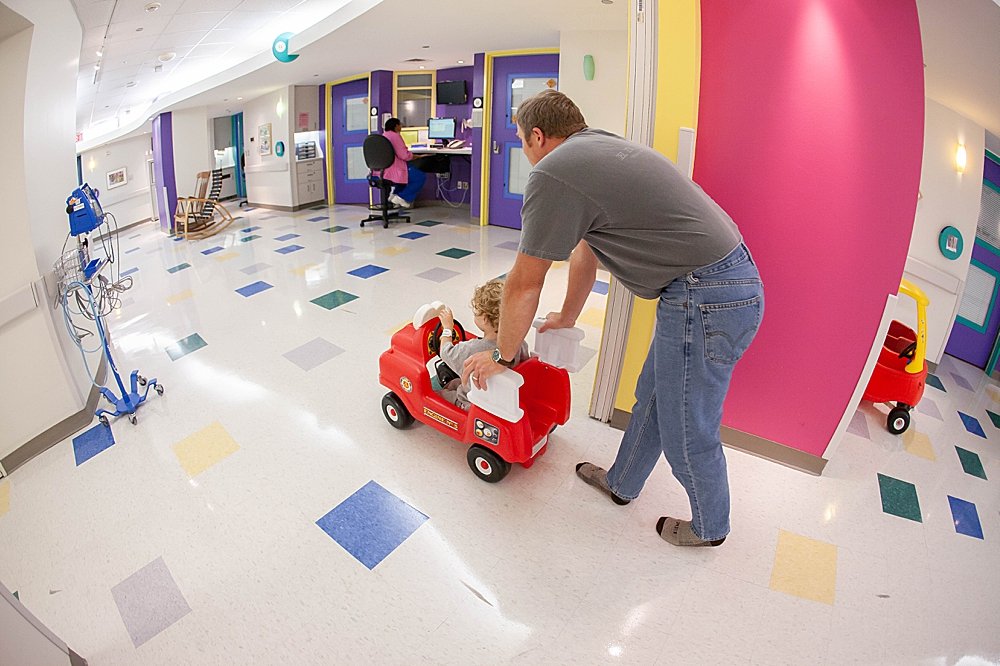 This was the first time Apollo left his room on the 15th floor. Yes, he looks happy…he was also completely drugged up on morphine…

And Elmo came to visit. Apollo’s expression says it all. 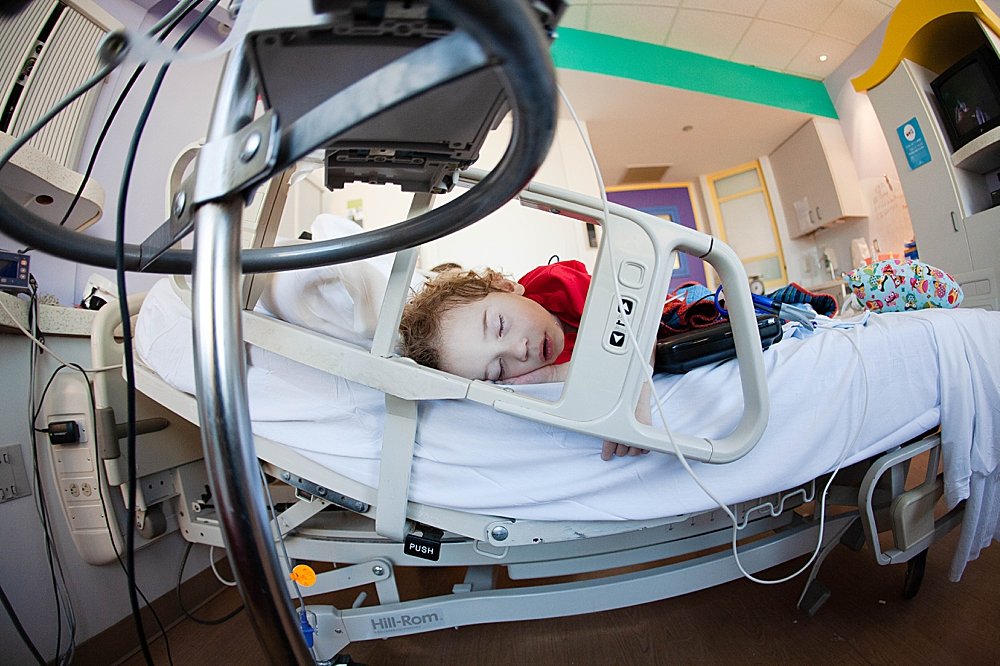 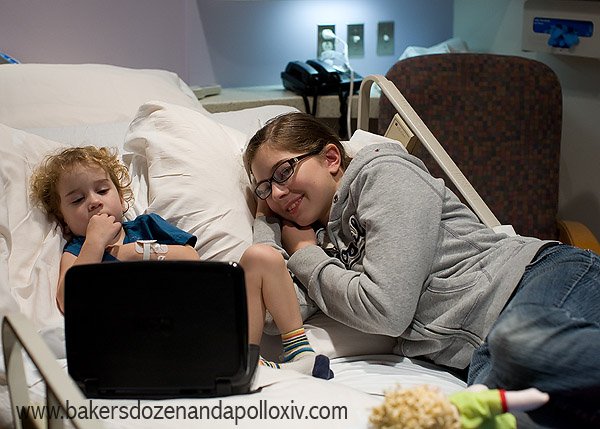 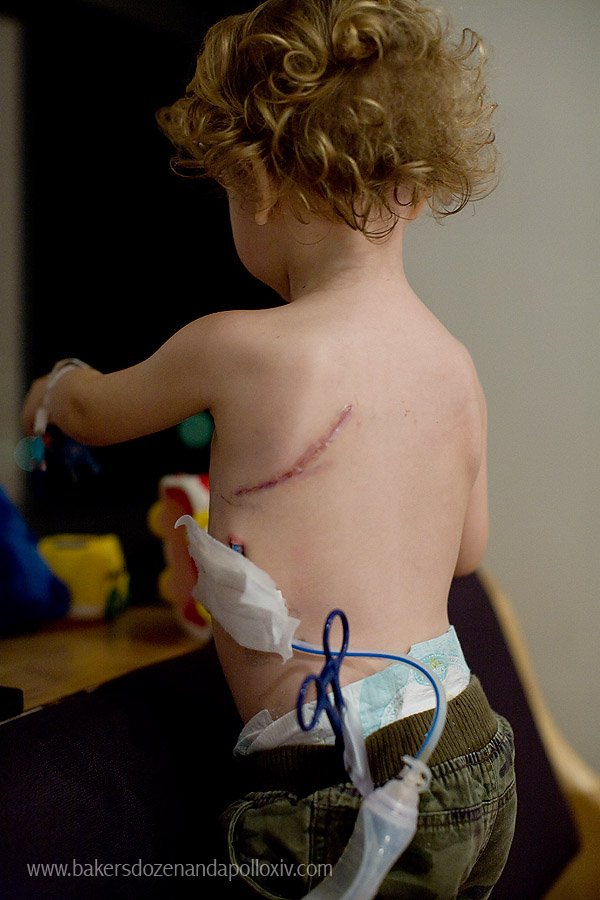 The new scar. As you can see, it’s almost  twice the size of the original one. They start out the same, then the new one veers off and up as Dr. M decided to go through the fourth interspace in the ribs instead of the fifth that Dr. K went through. The thicker, lower part of the scar is where the original incision was. Below is a photo of Apollo after his surgery in March. 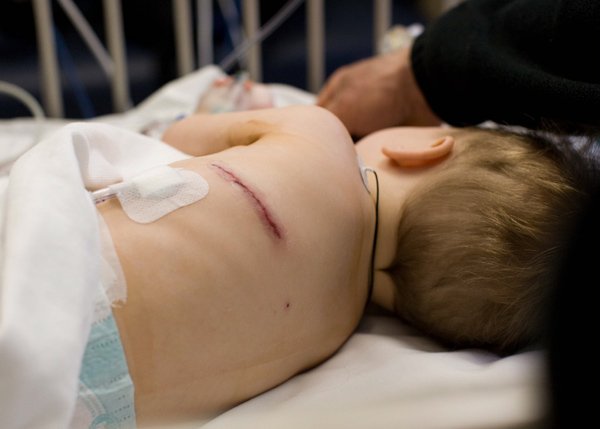 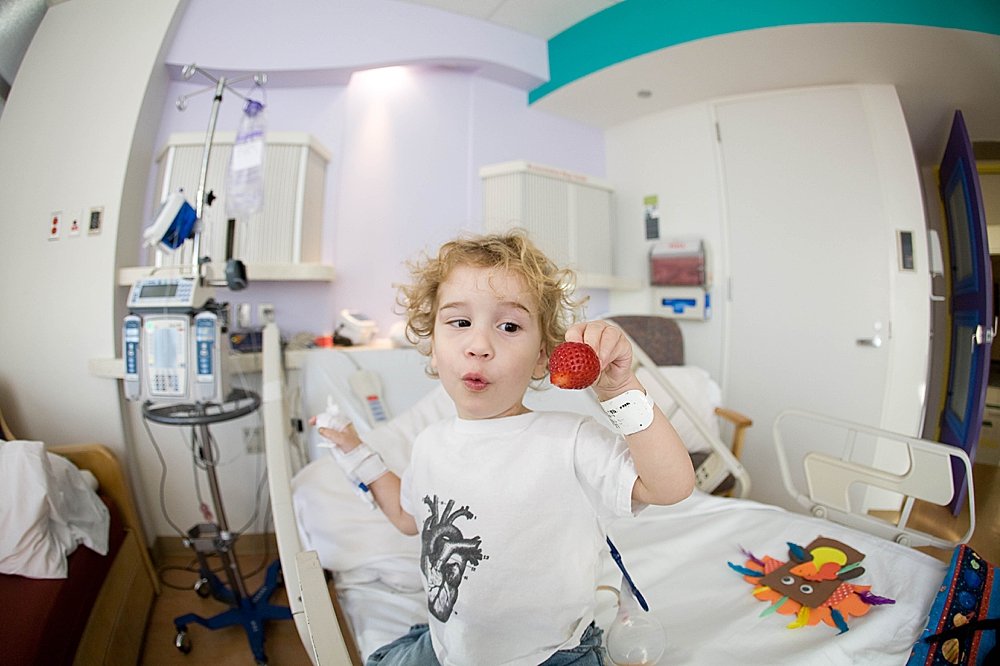 Here you can see Apollo only has an IV left in his wrist. At this point he was only kept in the hospital because of his chest fluid. 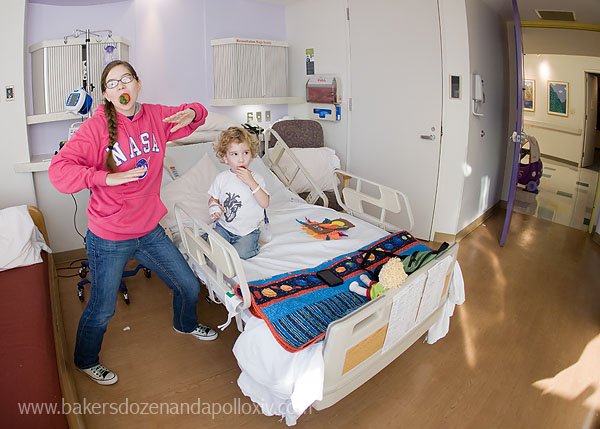 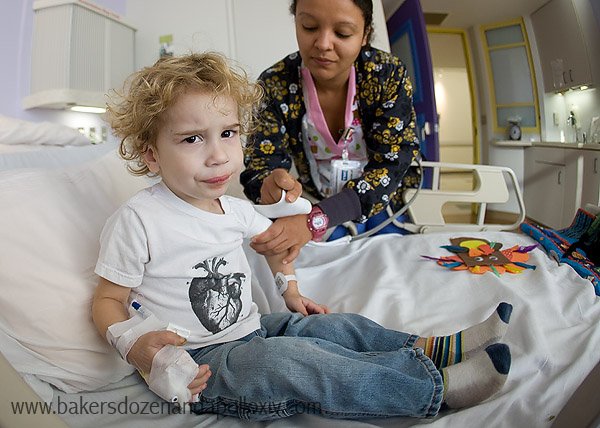 And this is pretty much what Apollo thinks about having his vitals taken every four hours.