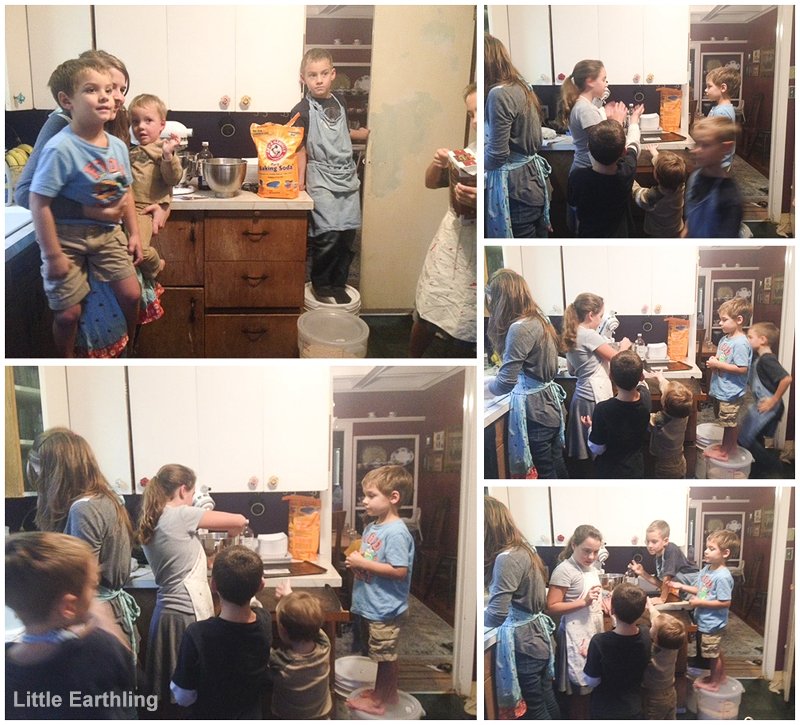 As you can see, all of the little boys are in love with Kalina. How sweet is that?

Yesterday Apollo had another visit to the Feeding Clinic at Seattle Children’s Hospital. It was an early release day for my younger kids and since school got out at 1pm and Apollo’s appointment wasn’t unil 2pm, I kept Hezekiah, Avi and Tucker out of school and I took them along on our little road trip. We have good friends who live just a few minutes from the feeding clinic, so after breakfast and morning chores, we headed to their house fora visit.

The results of our feeding clinic visit:

Feeding him is going better. This is GREAT news. I haven’t posted a whole lot about what we are doing in regard to feeding because what works or doesn’t work with Apollo doesn’t necessarily have any bearing on other kids….but here’s what it looks like.

The problem is Apollo doesn’t eat enough to grow. Why? We don’t know. Because he went so long when he could barely eat, due to physical issues, we feel into a pattern of feeding him whatever he could eat. That was fine for then, it kept him eating every day, even if it was only a bite or two. He retained his oral eating skills (some kids with feeding tubes will lose these). Right now, though, he can (as far as we know) eat anything. He just doesn’t. Whether it is because he is used to feeling hungry or doesn’t have a good connection of the cycle of: I feel hungry, I eat, I feel better.…we don’t really know. I should also add, the doctors had no idea removing his tonsils (which was done in 2014 due to severe sleep apnea) would improve his eating so much. So does he still have some type of physical issue preventing him from eating? We don’t really know. He has just started taking reflux medicine again, twice a day. I am really, really, hoping this helps him.

Here is the basic plan:

1.We need to stop “chasing after the perfect food”. In practice, this means I put two foods in front of Apollo and say, do you want potato chips or tortilla chips? And leave it at that. We used what Ellyn Satter calls the Division of Responsibility. We decide what, when and where Apollo eats, he decides if and how much. While that might sound ridiculously basic, nothing is easy when it comes to feeding Apollo, because he often decides to eat nothing.

2. We offer Apollo’s “preferred foods” at every meal.  When the dietician drew up the list of foods Apollo eats: always, frequently and sometimes, the only food in the “always” category was water! But, we now offer his “frequently” foods at every meal. His most common breakfast is eggs with Salt and Pepper Potato Chips. This means we are often adding things like HoneyNut Cheerios or Lettuce Ends (the bottom 1/3 of romaine lettuce) as entrees at meal times.

3. We offer him a carb, protein and fruit or veggie at every meal. The dietician is really, really pushing protein and carbs at every meal and snack. This is really difficult, because there are very few proteins he eats “frequently”.

4. Meals take place 6 times a day. The dietician doesn’t want him going more than 2.5-3 hours without eating. She thinks he gets too hungry (because he eats such small amounts) and then he can’t eat anything.

5. He is now taking reflux medicine twice a day. He complains almost every day that either his stomach hurts, or it “feels funny”. We are hoping this is the issue. Apollo has a long history of reflux, so this could be one more key falling into place.

6. All of his calorie intake is to take place at mealtimes, not while he is sleeping. We have been tube feeding him at night while he sleeps since 2014. While this solves one problem (gets him calories) it also gives him enough so he doesn’t have to eat during the day. Since we are working toward tube weaning, the nighttime calories have to go.

So that is the gist of what we are doing. It looks so easy and simple when I type it out. In reality, it isn’t easy or simple. But things have gone well these past few weeks and I am (once again) hopeful.

Feel free to ask any questions, I will try to answer them in the comments!

Ellyn Satter Institute: This website is dedicated to providing information about all types of feeding issues. If you struggle at all to feed your child, you will likely find some good info here.

*Child of Mine: Feeding with Love and Good Sense.  This is on of Ellyn Satter’s book. We’ve had it for several  years and provides a ton of great info. This book was actually recommended to me by a blog reader.

*My Plate Pocket Chart: We have been using this chart with Apollo to talk about different foods and eating. I bought this one because it came with 90 food cards. I use these as a visual reminder when he is having a hard time eating or choosing a food. We also use it for “meal planning” for Apollo.