How My Two Four-Year-Old Boys Learned to Read 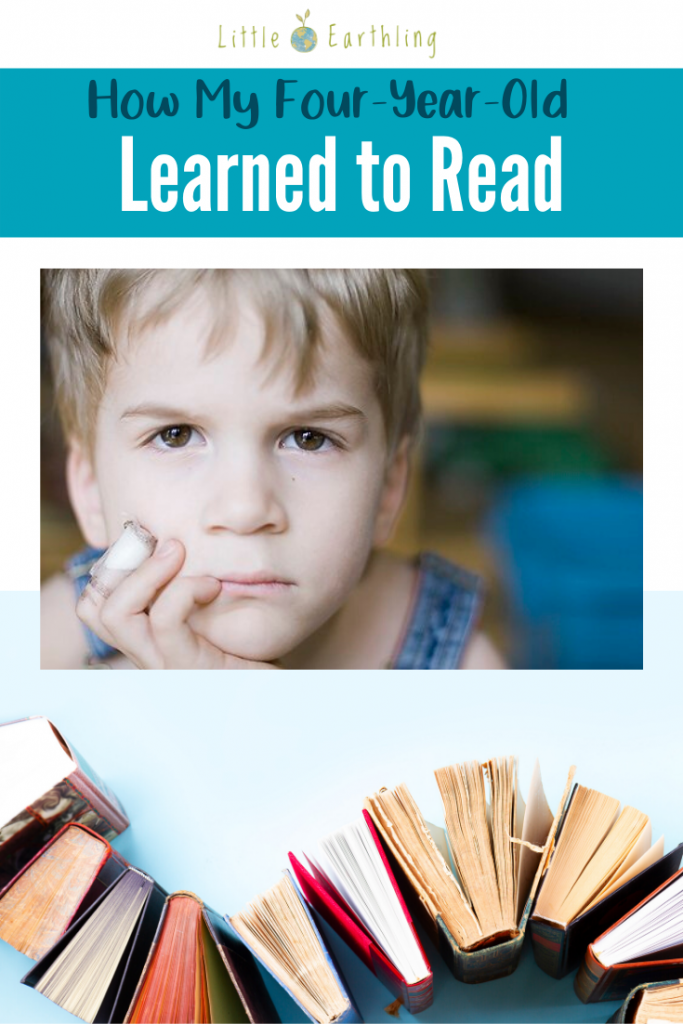 Can a four-year-old learn to read? And more importantly, should they? Here are my thoughts as a mom of two four-year-old boys who learned to read…and are now 22 and 15-years-old.

Four-year-old Hezekiah can read. And it came on rather suddenly. Hezekiah has known all of his letters and sounds for a few months now. He can do the normal pre-reader things like recognize his name, or family names, and a handful of other words, but hasn’t done any decoding yet.

The day after a trip to the dentist with some significant work getting done, I was in my room resting. In crept Hezzy with our battered copy of Teach Your Child to Read. He decided, on his own, that he wanted to learn to read. I was feeling okay, so I decided to do a lesson or two with him.

Hezekiah ended up whipping through the first twenty lessons in about half an hour. The very next day we went through the next twenty lessons. That’s right, forty lessons in two days. That was a little over two weeks ago, and he continues to make rapid progress. How well is he reading, you ask? While we are only halfway through Teach Your Child to Read, he now picks out words everywhere. In books, on signs as we are driving. He sits on my lap as I blog (or look at blogs) and is reading words on the computer (so keep it clean, Folks).

My Two Four-Year-Old Readers Were Boys

When Judah was four years and one month old, I finally gave in to his constant begging, decided I would start going through the book Teach Your Child to Read with him. He has observed his older sister, Adalia learn to read, and was determined to tackle the skill himself. I decided that if and when he lost interest we would simply put it aside. Much to my surprise, he was reading after his very first lesson. To this day, I have no idea how he learned his letter sounds, but the fact is he was developmentally ready at age four, and when we sat down to learn, he picked it up with almost no effort.

But What Books Does a Four-Year-Old Read?

By four and a half, Judah was reading chapter books. In fact, it was a problem because there are very few chapter books written that are appropriate for four-year-olds, but a  kid who can read that well isn’t exactly interested in Dick and Jane. While at the time (and even now) I would love to claim that my children are geniuses, the truth is studies show that the age at which a child learns to read has no bearing down the line, on how well they read. They almost always even out.*

*the truth is, while I originally wrote those words in 2008, Judah and Hezekiah are now 22 and 15-years-old. If I were comparing my kids (which I try not to do) across the board, based on IQ, these two are definitely two of the smartest. So while studies may show reading levels eventually even out, my early readers are definitely more academically inclined and conventionally “intelligent”.

And while Enoch could read technically at age six, he was not comfortable and reading independently until age eight. By age 8 1/2, he was reading above grade level. At age nine he tackled Michael Crichton’s, Jurassic Park.

Observing My Kids Learning to Read

After teaching seven children to read, I have made some interesting observations. These are hardly scientific, just things I have noticed in my own children. My two four-year-old readers have picked up reading more quickly and easily than my five and six-year-old readers. Is this because they were younger? Or just that they were ready to read at that moment? I don’t know. Right now Hezekiah (4) can read better than Jubilee (5), and more smoothly than Kalina*(7). He simply and methodically decodes each word, one letter at a time, he doesn’t try to guess or skip over difficult words. He just reads his way through them.

*When Kalina was twelve, we learned she has hearing loss in her right ear. in fact, she can’t hear any vocal tones in that ear at all.

At any rate, we’re having fun watching Hezekiah, and remembering Judah as a four-year-old reader. The fun thing about four-year-olds is, they can’t pronounce half the words they read. And they can often bring their own humor to situations. I remember driving around in our van when Judah was four. He saw a Porta-Potty truck go by with the words Honey Bucket written on the side. He piped up from the back of the van: “Don’t dip your chicken in the Honey Bucket sauce!” thinking he was hilarious and cracking me and Chuck up.

A Relaxed, Low-Pressure Approach to Learning

If you’ve been reading this blog for any length of time, you know we take a relaxed approach to formal learning (especially in the early years) while at the same time preparing a very thoughtful environment to foster learning. We have carefully chosen our children’s books and toys and have made every effort to make learning fun, not work. This has been our goal since our oldest was a baby. Maybe things would have turned out the same no matter what we have done, there’s no way to know. We’re just having fun over here with our tribe, making things up as we go along, and watching them each develop at their own pace.

Why Factors Helped My Four-Year-old Learn to Read?

In conclusion, I believe my two four-year-old boys who learned to read, learned because

1) They were already highly intelligent/gifted

2) They were developmentally ready. Both begged for reading lessons. Both times I thought they were “too young”.

3) They learned to read in a very low-pressure environment

4) They lived in a home full of books, were read to every day, and were encouraged to explore and learn at their own pace.

Can Any Four Year Old Learn to Read? And Should They?

I believe the most important trait in learning anything is to develop a love of learning in the first place. Have a prepared environment for your children. Choose their toys carefully. If something is too hard, drop it for a few weeks, or even months, then give it another try.

When Apollo was in first grade his teacher wanted me to drill him on sight words so he could “catch up”. I very politely told her, I was not going to drill him. He enjoyed reading and being read to and I firmly believed he would “catch-up” in his own time, with no pressure. Today, at age nine, he has read The Hobbit and is now making his way through Fellowship of the Ring.

So, no, not every four-year-old can learn to read. Nor should they. Develop a love of reading and a love of learning, and the rest will come.

You may also want to read:

How to Raise a Lifelong Reader

Coming of Age Books Every Kid Should Read

Check out our favorite resources for learning to read.

A Morning in Our Homeschool Vlog