Apollo is on day six of recovery from his g-tube revision and tonsillectomy (along with sleep endoscopy/bronchoscopy). It has been rough, my friends.

The g-tube site is healing beautifully. On the left you can see just how big and ugly the scar tissue was around Apollo’s g-tube. The mic-key (the name of his specific type of tube) was constantly pushed downward from the scar tissue causing it to rub and bleed and build up even more scar tissue. The doctors kept telling me this scar tissue didn’t hurt Apollo…but we knew it did. Every time we would touch it or hook him up to feed him (after he was asleep) he would moan in pain. Interestingly, frustratingly, back in July the GI nurse and doc from Seattle Children’s insisted the scar tissue was just fine- no need to “fix” it. The surgeon two weeks ago took one look at it and said needed to be removed. In fact, he would have scheduled surgery to remove it even if Apollo’s wasn’t already having a his tonsils out. It is so frustrating when doctors look at the very same thing and give you two completely different answers.

As far as the tonsils, the recovery has been rough. Extremely rough. This weekend was the very worst with Apollo waking and crying inconsolably 30-40 minutes before I could give him more meds. I have been alternating between Tylenol and Ibuprofen every three hours around the clock (even setting my alarm at night) with oxycodone for “breakthrough” pain…and even that hasn’t been enough. Chuck was gone this weekend, so I was flying solo giving him his meds, waking every 2 1/2 hours and not being able to help him.

He took a couple of sips water yesterday. Up until then he has taken no liquids by mouth. If it weren’t for his g-tube we would still be in the hospital to keep him hydrated. Yesterday he took a three-hour nap and woke up happy and chipper (because of the tube I was able to give him his next dose of meds while he slept). I am really, really hoping that was a turning point for him. Last night was much better, but he still woke in pain before I could give him more medicine.

And the icing on the cake is, he smells like rotting flesh. Because he has rotting flesh in the back of his throat… 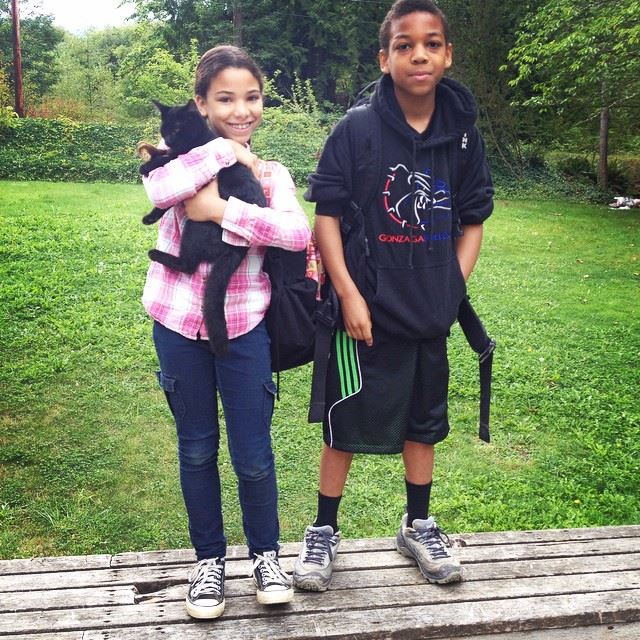 And, of course, today is the first day of school for Mordecai and Avi! Sixth and third grade. Aren’t they adorable?