How to Get Thinking Putty Out of Eyelashes; Or, It Sucks to be Me

I know what you’re going to ask, “What in tarnation is Thinking Putty?” followed closely by, “What was it doing in someone’s eyelashes?” and “Who’s eyelashes?” then quickly summed up by, “You’re right, it does suck to be you“.

Thinking Putty is an awesome silly putty like substance that comes in much bigger quantities and much cooler colors. It was THE hot item in my children’s stockings this year. Enoch has since bought several varieties and several of the other children have bought their own.  We now have enough thinking putty to keep a small classroom busy during an all-school assembly. It has also become our standard birthday gift for friends (and maybe after this blog post, enemies).

Thursday night while reading out of our Egermeier’s Bible Story Book, Tucker smooshed a big old wad of the stuff onto his closed eye in an attempt to look more pirate-y. As soon as our evening prayer was over, he came to me with his problem.

Here, I even made this cool little visual for you, in case you ever need to determine whether or not you child has Thinking Putty in his eyelashes: 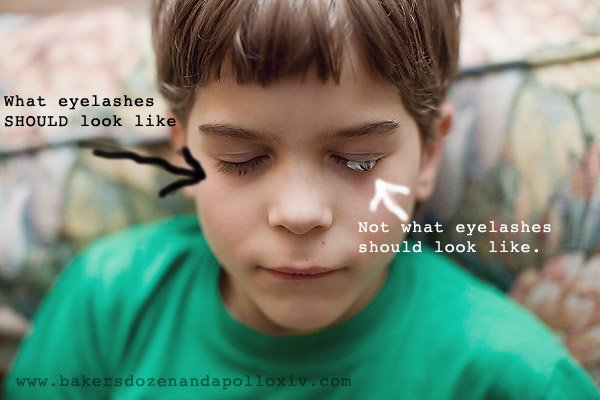 Determining the cause of the eyelash goop was the easy part. Not laughing at him was slightly harder. Cleaning the stuff our of his eyelashes was darn near impossible. When Thinking Putty is warm, it is soft and pliable. When cold or frozen, it becomes brittle and is easy to remove from surfaces. While we do have a large chest freezer, stuffing Tucker inside didn’t seem like a viable option.

Chuck suggested using butter as a solvent then headed downstairs to tube feed Apollo. I smeared butter all over my son’s eye, made him sit and marinade for a minute or two. The other thing about  Thinking Putty is, if you pull it slowly it stretches and sstreeeeeetches and STRETCHES pretty much into infinity. If you yank fast, it simply breaks off.  The thing is, I couldn’t just yank without ripping out his eyelashes entirely and quite frankly stuffing him in the freezer sounded more humane. Twenty minutes later I had 90% of the Thinking Putty out and sent the boy to bed. Then I lay on the couch to read.

Not five minutes had passed before Kalina ran upstairs saying Apollo had puked and Chuck needed my help. I grabbed a couple of towels and ran downstairs where I saw  Chuck drenched in vomit from his shoulder all the way down his arm and dripping off his hand onto the floor.

{Sorry, I didn’t make a visual for vomit identification}

The carpet was covered and Apollo was still erupting. I threw down a towel and held Apollo while Chuck dripped. Once Apollo was done Chuck headed off to shower and I mopped up Apollo. When I removed the towel I had thrown over the puddle of vomit I found a mixture of vanilla flavored formula and chicken. The vomit was so chunky I was reduced to picking out chunks of chicken, scrubbing the floor with wet wash cloths then drenching the area and taking the shop vac to it.

Of course, nothing is ever that easy. Since we don’t usually vacuum up wet stuff with the shop vac, we first had to open it, empty it out and remove the filter. Next, I doused the carpet with warm water and vinegar, then vacuumed up the slop, then mopped up the area some more. Judah was dispatched to clean out the contaminated vacuum hose, Kalina gave Apollo a bath and Tilly was directed to clean up my knitting supplies.

Knitting supplies, you ask? Why yes, Apollo managed to get vomit IN my knitting bag which was sitting nearby. Thank goodness the sweater I am knitting for my unborn niece was sealed in Ziplock bag! If not, I may have had to ditch the whole project.

Beads of Courage Sibling Program {and a Quilt}