How We Met {Teen Missions International}

Okay, I’ve had many, many requests for a “how did you meet” post…so here it is.

In 1993 at the age 17 I spent my summer in Tanzania, East Africa with Teen Missions International. We made a film about AIDS to be shown around the country. It was the most amazing, life changing experience (and just as a side note- my two future-children Keziah and Ezra were a year old in West Africa).

The next year, 1994, I decided to return to Teen Missions, but this time was headed to Brazil to help dig fish raising ponds at a Bible School there. All Teen Mission teams start out with two weeks of Boot Camp in Merritt Island, Florida. It was there that I met the four leaders for our summer team: Jerry and Paula, a married couple who were missionaries in Brazil, Chris, a young lady in her early twenties and twenty-two year old Chuck. I had no particular interest in any of the leaders, except for Chris, who was also from Alaska…I think you have to be raised in rural Alaska to understand someone else from rural Alaska…so we got along just fine. As for Chuck, he was male leader and I saw very little of him, beyond him passing out orders for work, or punishment as the situation called for. 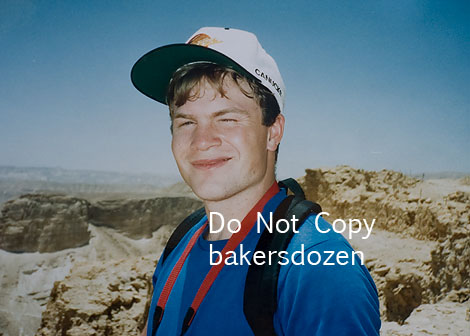 All of that changed very late in the summer as we sat hanging out in the hot Brazilian jungle, waiting for evening devotions. By then I knew a little about Chuck…he was a soft spoken, cute Canadian with an adorable accent…even if he did say things like pAsta and a- boot. On this particular night, he sat across the room chatting with a group of people. I was on KP and happened to hear him say, “I want to have tenchildren”. Now that caught my ear…I had known for years I wanted a large family…and I wanted a husband who desired the same…not a husband who I could talk into having a large family. So I said, “Hey, Chuck, do you really want ten kids?” and he smiled sheepishly and said, “Yeah, I do”.

That was a defining moment for me. I remember thinking that night, how many 22 year old guys do you meet who want a large family? This guy is a Christian, has a passion for Jesus and wants a large family too??? After than night I started watching Chuck from afar….

Then I got sick. Really sick. With malaria. And it just so happened that Chuck was the team nurse. That pretty much just meant that he took blood samples and distributed medicine, but I was now quarantined, and he came several times a day to deliver quinine to me and the others struck with malaria….We had never even had a conversation before I got sick, but now we saw each other several times a day and naturally began to chat as I began to recover…

Teen Missions has a very strict policy about no “pairing off”. Not even just boyfriend-girlfriend stuff, but no hanging out one on one w/ members of the opposite sex ever. This was strictly enforced both years I was on a team, and there really were no relationships built between the sexes…it was very much a brother-sister type experience.

So the summer ended and we both headed home, just days after Chuck’s 23rd birthday. He to British Columbia and me to the frozen north. And we began to write. Letters were sent several times a week and we got to know each other better. Chuck came to visit…and he proposed to me. As we sat on the beach. In Alaska. In January. On an iceberg.

What I really meant was, “oh my goodness, Chuck is some crazy-obsessed-stalker who just came to visit and now wants to marry me”.

In my defense, we weren’t even boyfriend and girlfriend. Never in our letters back and forth had we discussed the two of us having a relationship.

In his defense, he’d been planning the proposal for months.

In the end, I said yes, on the condition that Chuck go to Hawaii with me. I was already registered to transfer to the University of Hawaii, Hilo in the fall. I’m sure in Alaska, in January, sitting on an iceberg that sounded like a great idea to him.

I flew to British Columbia, Canada in March to meet Chuck’s family (who say things like “pencil crayon” instead of colored pencil and “felt” instead of marker) and we continued to write letters and plan our wedding long distance.

In April I had a reoccurance of malaria. I went to three different doctors who prescribed three different kinds of antibiotics. I continued to go to school and work, despite nightly fevers spiking at 104 and 105 degrees…they usually dropped down to 101 by morning. I was so sick and miserable for weeks but couldn’t get any of the three doctors to test me for malaria…Finally, finally I went to the emergency room one night when my fever got up to 106.7…a simple blood test revealed malaria and I began treatment that night.

The malaria left me very weak. So weak my mom had to pick out our wedding cake and napkins. I missed the last week or so of school, but managed to return to take (and pass) my finals. 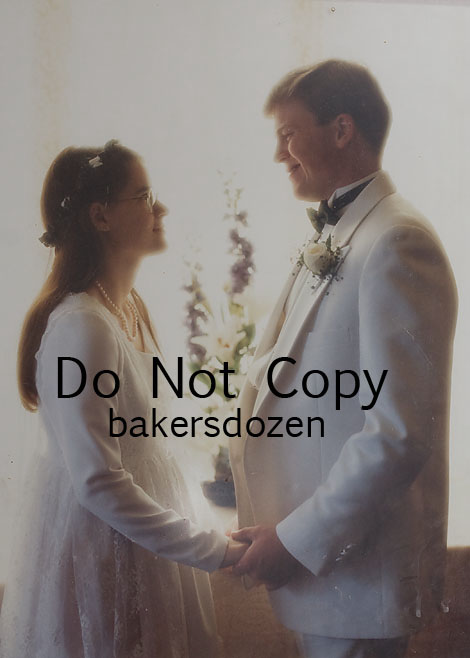 We were married May 20, 1995 in Anchorage, Alaska. We spent a week in a condo in Alyeska, then two weeks in Israel (the latter compliments of Chuck’s parents- thanks!)

In Israel I got sick. Really sick. I was dizzy and nauseous and vomiting. And I felt weak. Really weak. I told Chuck I either had a  relapse of malaria or was pregnant. I think you can probably figure out which one was the case.

And that, my friends, is how we met.