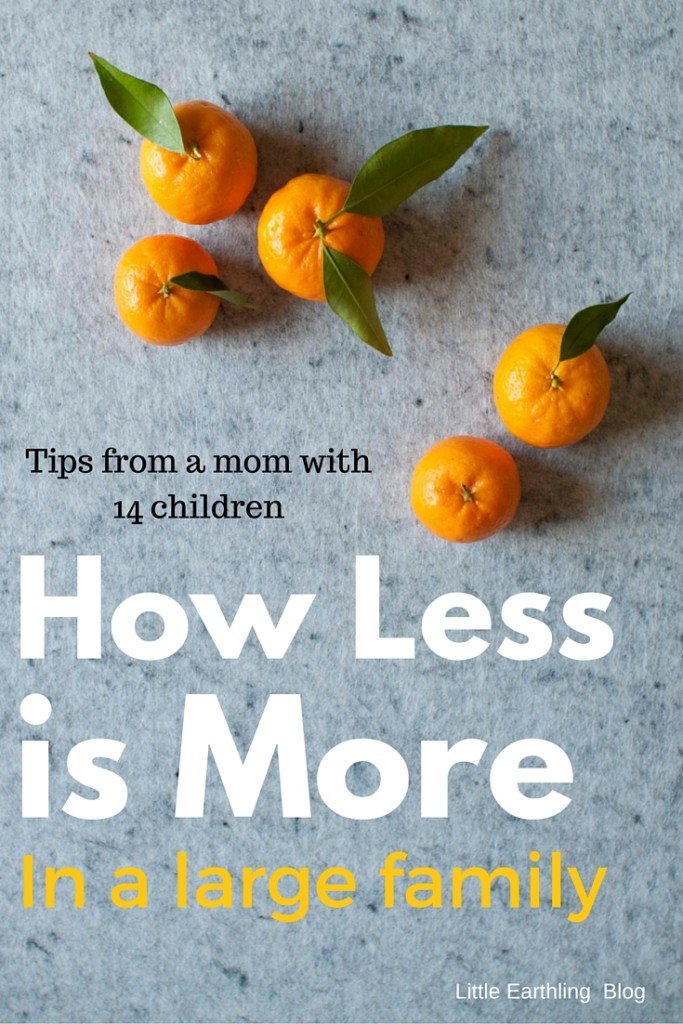 It might surprise you that one of the big lessons I have learned while managing a large family is that less is actually more. I have seen this concept play out time and time again in our life. If I want to manage my home and family well, not having an over-abundance of things actually helps.

How Many Bottles Does One Baby Need?

When we adopted four-week-old Mordecai in 2002 we purchased a pack of three bottles from Walmart. Three. We used those three bottles the entire time he was bottle-fed (after Jubilee was born I was able to successfully breastfeed him.)  Because we owned only three bottles they were almost always washed immediately after being used. On the rare occasion that they weren’t, it was easy to remember, “Oh, the green bottle is on the shelf in the living room” or “the purple bottle is in the diaper bag“. Had we owned a dozen bottles, it would have been nearly impossible to keep track of them all. Would it have made life easier? Probably not. Twelve bottles would have meant that six or seven or twelve bottles could have been dirty at the same time. With only three, they were easy to wash and it was easy to stay caught up.

We went camping as a family for the first time when we had seven children under the age of eight. I learned a few lessons on the trip.

Everything Gets Dirty on a Camping Trip

But most importantly I learned: everything gets dirty on a camping trip. Every item of clothing, whether it was worn or not, had to be washed once we were home. It was seriously discouraging and would take me a week to get the laundry done and dishes cleaned from a two-night camping trip. Here’s the thing, my kids were all really young, and they would be dirty within 10 minutes of waking up no matter how many changes of clothing we had.

Overalls for the Win

The next year, I took a new approach. Every child had one pair of rugged Carhartt overalls, one t-shirt, one sweatshirt, two pair of underwear, two pairs of socks and warm pajamas. They wore this pair of Carhartt overalls: Friday, Saturday, and Sunday. At night we took them off and had the child change into warm pajamas. The next morning, on went the overalls.  Period. When I got home I had two loads of laundry from our camping trip and that was it.

How Many Cups Do You Want to Wash Every Day?

Last year we invested in these Fox Outfitters Stainless Steel Cups. I say invest because they run about $32 for a pack of five. We have two sets which means a total of ten cups, and two smaller cups (that are easier for Apollo to manage). Having a set number once again means we know when one is missing and they are easy to track down. This has been so much nicer than dozens of plastic cups that get left outside and in every room of the house!

Yes, it’s true, I have found this process even helps with clothing. Think about it, if I had two children who each owned ten pairs of jeans, that is potentially twenty pairs of jeans to wash. If I have ten children who each own ten pair, that is potentially one hundred pairs of jeans to wash! You can see just how easy it would be to fall behind on laundry and never be able to get “caught up” (are we ever really caught up?) again. How about shirts? I know many kids have 20 shirts or more…

How Much Clothing Does One Child Need?

Now, I am not at all suggesting you only give your children one or two changes of clothing, I am simply suggesting you think about how much they have and how to manage it. Hezekiah and Tucker wear jeans 90% of the time. Both both usually have four pair in rotation. It is easy to keep them all washed and clean, and they all look alike so they don’t need variety. My girls have a little bit more clothing than the boys and my teens? I don’t manage their clothing at all.

Won’t Their Clothing Wear Out Faster?

You are probably thinking about now, “If they only have four pair of jeans, don’t they wear out faster?” and the answer is yes, they do. That is where my clothing managing system comes into play. If my boys have 10 pairs of jeans that all fit, I will pack half of them away. My system makes it easy for me to grab what I need within minutes, so it is easy to keep on top of it.

These are just a few examples of how I have found less actually more in our large family. Have you ever tried any of these methods? Does it work for you? I’d love hear your ideas.

The Thing About Clutter