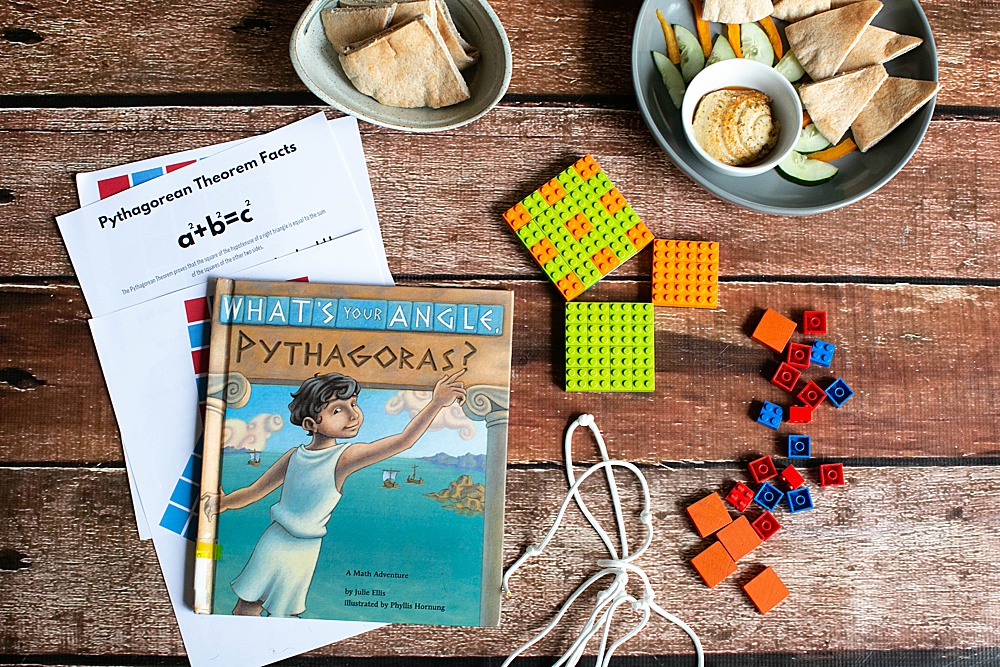 Sadly, math was never, ever one of my favorite subjects in school. In fact, many years I absolutely dreaded it. When I took my final math class for my college degree (Probability and Statistics) I felt like throwing a party. When it came to homeschooling, I was determined that my children would have a different math experience. I am always on the lookout for great books to teach mathematical concepts.

What’s Your Angle Pythagoras has been one of our favorite books since well before Apollo was born. It uses a story approach to show a Pythagorean theorem proof for kids. I am picky about books, my friends. I don’t like cheesy books, poorly-written books, or books that artificially try to cram some educational concept into the confines of a story (thereby ruining the story itself). Thankfully, What’s Your Angle Pythagoras? is a great story that brilliantly works the Pythagorean theorem naturally into the plot and lends plenty of ideas for hands-on projects outside of the book.

It will probably come as no surprise to you that Apollo loves to read about Greece. After all, he loves the Percy Jackson books and learning about Greek history and Greek gods. I am a huge believer in taking our children’s interests and running with them. I have decided to take Apollo’s love for all things Greek and create some fun activities based on What’s Your Angle? and the theorem.

It’s relatively easy to memorize a2 + b2 = c2 but many kids (and adults) struggle with the age-old question, “But what does this mean and why do I need to know it?” Thankfully these hands-on activities will answer both of those questions.

What’s Your Angle? demonstrates two simple ways to solve the Pythagorean theorem, using blocks and a rope. Both do a great job of visually showing how a2 + b2 = c2 and (more importantly) why that is important. Here Apollo is using LEGO bricks to demonstrate the proof. It is so simple and he is able to follow the patterns made with two different colors. Once your child masters this, challenge them to make one twice as big!

What’s Your Angle?also shows how to prove the theorem with a simple rope with twelve evenly spaced knots. Now, it’s true my nine-year-old doesn’t need to know the Pythagorean theorem. But, when he hits this in algebra, it will be a completely familiar concept to him.

I wanted this STEM project to be as inviting as possible to Apollo, so when I set it up with the supplies I also laid out a simple Greek snack: a plate of chopped veggies, pita bread, and hummus.

I also created a few fun printables to go along with this learning activity. One with facts about Greece ( of Apollo’s favorite topics) and another with Pythagorean Theorum facts. You can download them here.

Math is fun: Pythagoras Theorem has several different ways to prove the Theorem.

The Kids Should See This has a great video called How Many Ways Are There to Prove Pythagorean Theorem. I watched this with Hezekiah (15) and Apollo (9) and they both enjoyed it. They also have a really cool video proving the theorem with water.

This video allows you to show the proof using oragami.

You can find everything you need to set up this project in my Amazon Storefront.

Find Greece on the map and the island of Samos (where Pythagoras was born).

Get a map and use the Pythagorean theorem to find the distance between two places.

Give your child graph paper so they can prove the theorem.

Build a tower using the Pythagorean theorem to make sure the foundation is square.

If you enjoyed this post be sure and check out these book-based STEM projects.