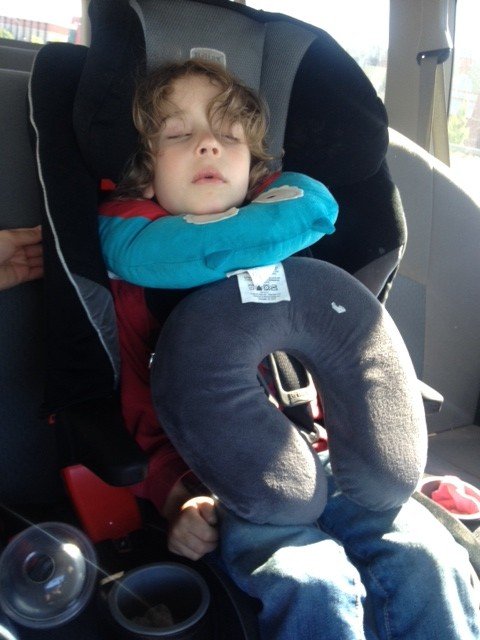 These days it literally takes this two-sleep-pillow-set-up to keep Apollo’s airway open and him breathing while we drive.

Dr. P said that Apollo’s tonsils were at a 3+ on a scale that goes from 0-4+. He also said last time he saw him, they were at a 2+. In some twisted bit of irony the only part of Apollo that seems to be growing and thriving are his tonsils.

We love Dr. P for a variety of reasons (he is also Kalina’s ENT) not he least of which is his genuine concern and care for Apollo. At this visit he said he “remembered us well” and told us how good Apollo looks to him. “Especially considering what you guys went through to get to this point“. Dr. P came into our lives when Apollo was readmitted to the hospital just six weeks after having his heart “repaired”.  After spending months and years trying to get doctors to pay attention to Apollo’s serious issues this means a lot to us. Dr. P has seen Apollo when he was in pretty rough shape. He is the ENT who did his last bronchoscopy, therefore he knows exactly what Apollo’s airway looks like. Continuity in care is so important!

Anyway, Apollo is scheduled for surgery on August 27.

The current plan is to:

1. Put him under general  anesthesia and do a sleep endoscopy

3. Remove tonsils (we have the choice of traditional electrocautery or “shaving”) and any adenoid tissue that has grown back.

Because of his “difficult airway” and “unique” anatomy it’s a bigger deal for him than your average four-year old. He has to stay in the hospital overnight to make sure he has no breathing issues after the surgery.

4. Depending on the results of the endoscopy/bronchoscopy he may have his floppy larynx (laryngomalacia) trimmed. I assume it is something like this: supragrlottoplasty, though the Dr. didn’t use that exact term. Apollo already has a narrow trachea (airway) due to his vascular ring, so the goal is to provide as large of an airway as possible. This is why CPAP is not an option for him at this point- that would just be forcing air into a too-small opening. This procedure has some risk…mainly that Apollo will have “difficulty swallowing” for perhaps weeks afterward…and possibly need to be intubated overnight as he recovers. If this were to happen, his actual time spent in the hospital is unknown. Since Apollo is tube fed, we can live with a temporary swallowing issues. The idea of intubation is scarier, but Dr. P took one look at the videos of Apollo snoring and experiencing sleep apnea and described it as “severe” and “scary”. He said he believes at this point that his obstructive sleep apnea left without correction could be detrimental to his growth and development. We won’t know if this is happening until Dr. P has him asleep and can do some tests. At that point he will come out and talk to us so we can make a decision about whether or not to proceed with this part of the surgery.

Tucker is suffering from severe anxiety since he has heard that Apollo needs more surgery (we haven’t told Apollo yet and won’t until it gets much closer). Tucker is having trouble sleeping at night and tell us he “feels weird”. He has spent a couple in our bed and I have been giving him Bach’s Rescue Remedy for anxiety. I think he is having a kid-version of panic attacks. If I try to leave the house he sobs and feels sick.

This is a kid who has seen his parents leave for another state with one-way tickets to seek heart surgery for his brother.  This is the kid who, upon meeting his first grade teacher, looked her right in the eye and said, “I’m only here because my baby brother has a heart defect“. I have written a bit in the past a bout the toll a sick child takes on the entire family. This is just one small example. If you’re the praying type, I’d appreciate it if you sent some  Tucker’s way.

{Edited to add: Apollo has reached a new milestone in chronic sickness. He has suddenly realized that he misses out on things while he is a doctor/hospital visits. He cried and cried when he found out his siblings were going to his friend Owen’s house while he made yet another trip to Seattle Children’s Hosptial. Then the very next day, his siblings played at Grandma’s house while he saw our local doctor. More tears. This is so hard to watch as a mom.}

Not What I Planned
Tagged Apollo, Double Aortic Arch