Sorry to leave you all hanging, and thank you for your prayers and kind comments. Things just got too hectic, trying to keep a toddler happy and safe in the hospital for a week. We have our answers…some good and some bad. I think I’ll break this off into two posts, one with mainly the information about his health, and the other with lots of photos and narrative. 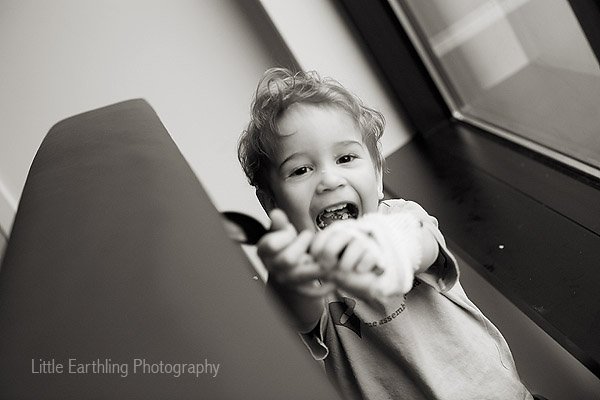 Apollo had many, many happy moments between tests.

I believe I left off talking about the results of the upper GI and swallow study. Both showed very clearly an indentation in his esophagus. When Apollo eats, food slows down and gets stuck in the esophagus. When the GI doctor came in to talk to us, I asked (quite naturally, I thought) what he could do to fix it. He stared for a moment, and then said, “Nothing. We can’t do anything to fix this. Now, we can hope, that over time, as he gets bigger, the esophagus will straighten itself out now that it  is free of the double aortic arch. But this is going to take years”.

{Here is a link  talking about compression of the esophagus from a double aortic arch…these are of course not images of Apollo’s esophagus, but should give you an idea of what we are talking about.}

And even worse, the pulmonologist suspected that the indentation was caused by another misplaced vessel from the heart.

Wednesday, Apollo had a rigid bronchoscopy done by an ENT, a flexible bronchoscopy performed by a pumonologist and a CAT scan, all while under a general anesthetic.

The rigid bronchoscopy found the following:

* an abnormal trachea where the double aortic arch was.

* a portion of his trachea is oblong shaped instead of round (think of stepping on a slinky). These will always be shaped like this, but as he grows, his trachea will grow and he should see some improvement in breathing.

* he has laryngomalacia (floppy larynx or voice box). The ENT said as soon as he had Apollo sedated and lying down, he made the exact same noise that I had recorded.

After sitting and listening to all the things wrong with his airway, we were a bit apprehensive about what we were about to  learn from the pulmonologist…thankfully all she had to add was slight tracheamalacia where the double aortic arch was. She agreed with everything the ENT found, but below the level of his double aortic arch, everything looks fine.

* As far as the CAT scan, it is indeed vessel from his funky aorta pushing against the esophagus.  Surgery to correct this is occasionally done on adults, but it is very risky and in Apollo’s case, the vessel would have to be moved to a less-than-ideal spot, which could lead it to kink. In short, there is nothing that can be done about it. The cardiologist said there are NO long-term studies on kids with these. With this misplaced vessel, Apollo just took his very rare heart defect, and made it ever more rare. The cardiologist did find one study, which showed most patients with this are doing very well at one year post-diagnosis.

So where does this leave us? Basically, he has a narrow, compromised airway, which cannot be repaired surgically. He has a narrowing in his esophagus, which also cannot be corrected. The consensus of the ENT, pulmonologist and cardiologist are that the only thing that will help Apollo is to get bigger physically. Of course, lack of growth is what sent us to the doctors in the first place. He simply can’t pass enough calories down his damaged esophagus to grow adequately. Which means he can’t improve.

It was the recommendation of the doctors and speech therapists that Apollo get a g-tube to help him take in enough calories to grow. And so that is what we have decided to do. We will head back down to Seattle in the next week or two to have the tube surgically placed. Apollo will continue to eat just like he is now, but we will finally be able to get enough calories in him to hopefully help him grow and heal.