Dealing with the Reality…My Child is Sick.

Settling in at Children’s. We were blessed with a private room because of Apollo’s sleeping issues. 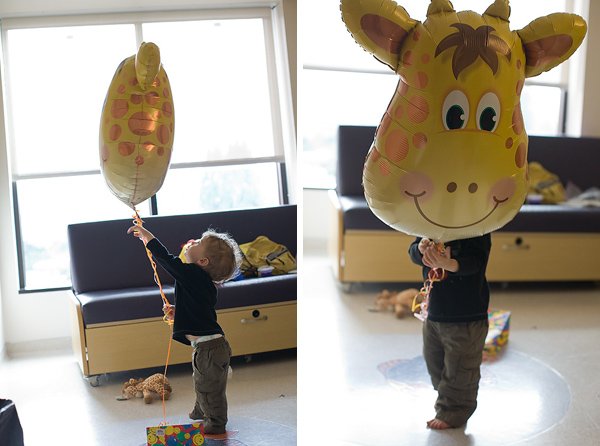 My blog was recently found by a mom seeking information about her daughter’s rare congenital heart defect- a double aortic arch. I was so happy be able to share our experience with a mom going through the same thing. Della had her surgery about two weeks after Apollo. You can read about it here. Della is doing very well post-surgery. She and her parents sent this gift to Apollo in the hospital. It really brightened his day! 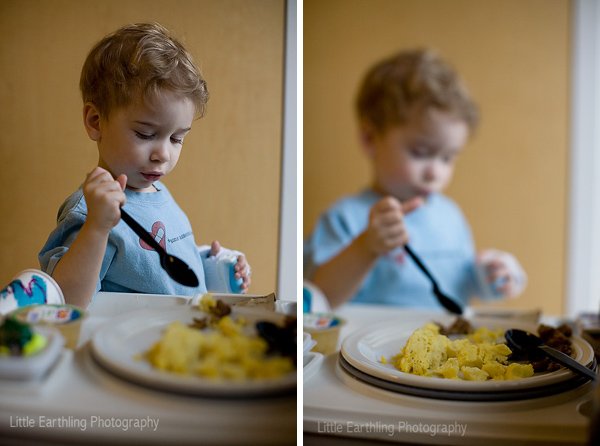 The hospital made a huge effort to supply food Apollo could and would eat. Most of the times he wouldn’t touch the food on his tray (um, unseasoned boiled potatoes? unseasoned ground chicken?) but they did hit the mark with scrambled eggs and greasy breakfast sausage. 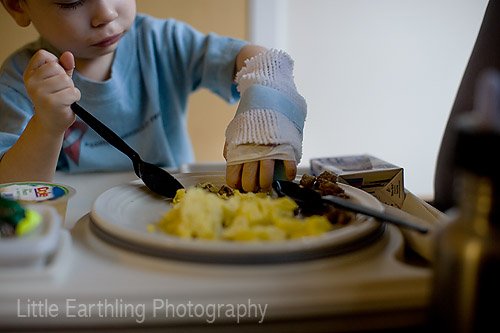 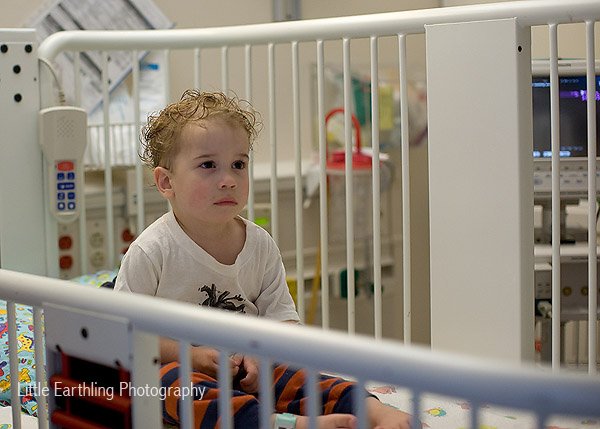 Watching movies from his crib between tests. 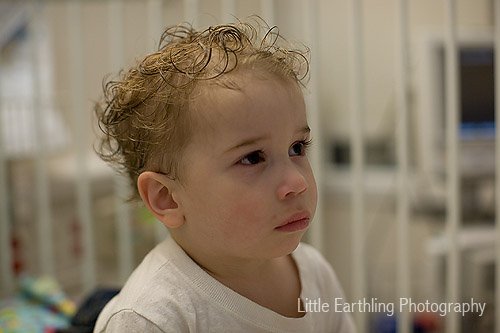 Apollo needed to be hungry for his upper GI and he wanted to nurse (partially because he was scared) so Chuck ended up taking him while I waited in the room. When they returned Chuck described what he had seen in the images…

I wanted to cry as the reality hit me, but I couldn’t decide if I wanted to cry from happiness (they found the problem!) or because the fact that they found something means something is wrong. And then the GI doctor came in, looked me in the eye, and apologized. “I’m sorry to have to tell you this”. Are there words for having a specialist tell you they are truly sorry for the bad news they are giving you about your child? That there is nothing they can do to fix the problem. But you can hope, that years from now, when your son is much, much older, it may be better? 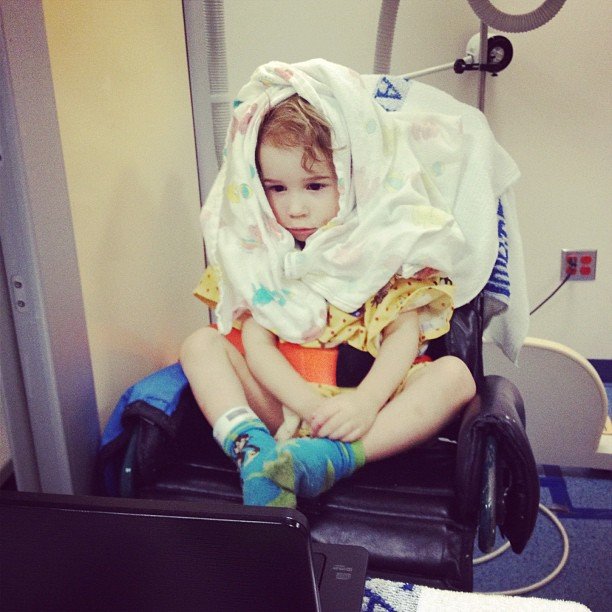 Apollo took this blanket and wrapped it around himself during the swallow study.

It was only a couple of hours later, that Apollo had his swallow study. If I ever questioned the wisdom of a g-tube, the necessity of it was shown clearly on the screen. I truly believe it would be cruel not to give one to Apollo and expect him to continue to force  just enough nutrients down his damaged esophagus to maintain, but not to grow.

The report from his feeding evaluations several weeks ago says this: Throughout the session Apollo’s breathing was audible, significantly more so during the meal. The effort to breathe became significantly more demanding during the meal especially when required to bite and chew the food. assessory muscles of upper chest, neck, along with the jaw and head thrust were used to breathe while eating/chewing. He had difficulty coordinating the chewing and maintaining an airway….While running with sister in the hallway, for a short time, his breathing was taxed and very audible. He came back to mom and his coloring was paled, within 30 seconds his cheeks were flushed.

Yes, there is no doubt in my mind this is the right choice. 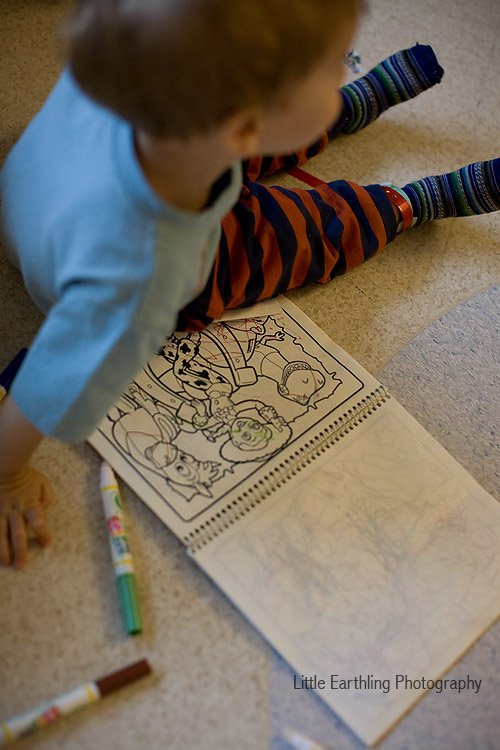 Are there words to describe what it is like to have a pulmonogist come in and tell you she has called the cardiologist because it looks like this is another errant vessel in his heart? When we went in for our post-surgery visit I specifically asked the cardiologist if his heart was considered “repaired”. And he said yes. Even then it seemed that Apollo’s heart surgery would be some footnote in his childhood…remember when Apollo had a double aortic arch and had it repaired? But it was made abundantly clear to us this time that doctors, hospitals and specialists will be major theme in Apollo’s childhood, if not his adulthood as well.

And I knew, when the cardiologist was the first one to talk to us about the results the CAT scan, that things were not good. How does it feel in that instant? Do you hope they can do open-heart surgery, and have your toddler suffer through that? Or do you hope it can’t be fixed so no surgery is required?

In some strange twist of irony, we recieved this  news exactly seven weeks after his heart surgery.

We drank a lot of coffee…and were usually waiting for the in-hospital Starbucks to open at 6 am every morning. 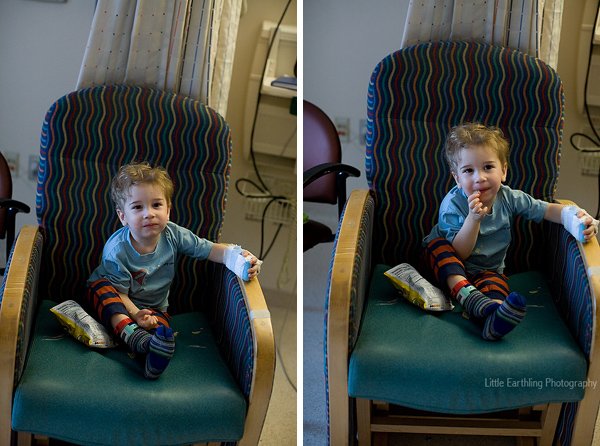 Apollo’s last meal before the bronchoscopies and CAT scan…potato chips! 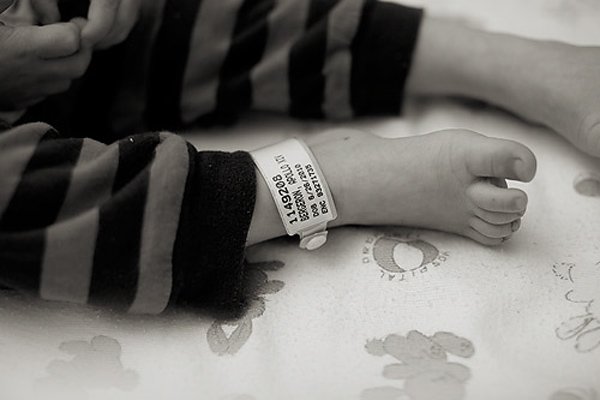 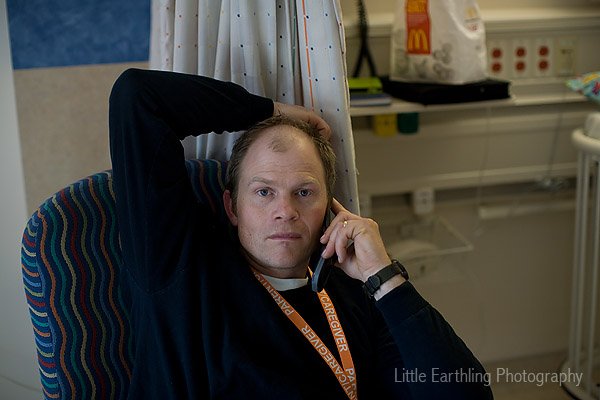 Trying to keep our parents and kids updated on the procedures and results..it was a wee bit stressful as you can see from Chuck’s eyes. 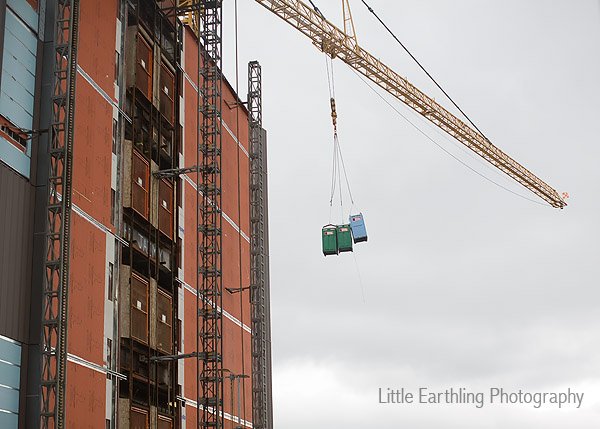 But there were lighter moments…like looking out the window to see port-a-potties being raised up to the roof every morning as they build an addition onto the hospital. 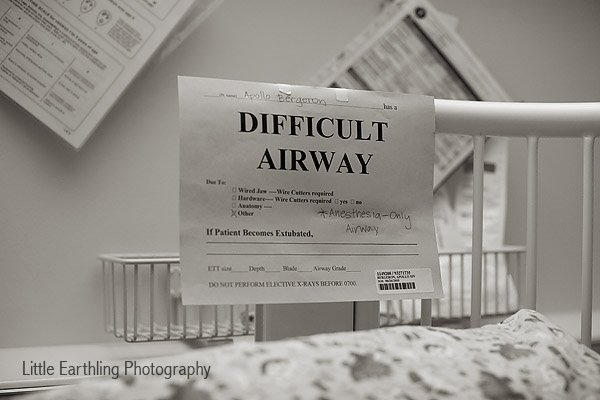 And then there were sober moments…like seeing this sign posted on Apollo’s crib after his bronchoscopies. 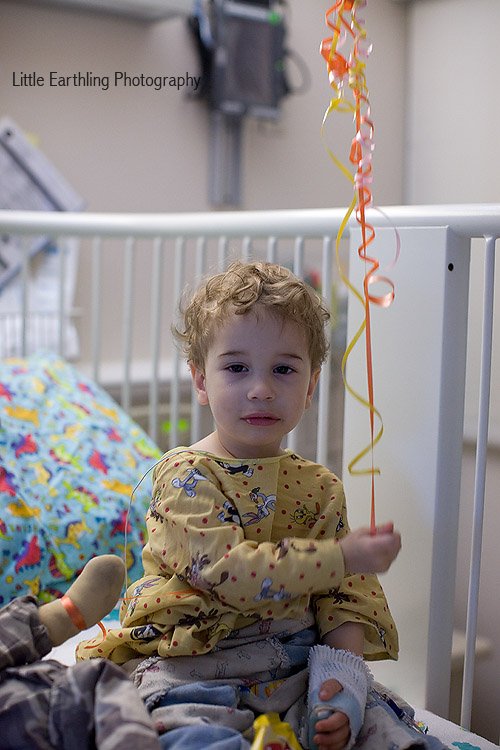 This is Apollo the morning after his bronchoscopies. He returned to the room about 8:30 pm and awoke without too much drama. He wanted to nurse (he hadn’t eaten in 12 hours). Around 10:30 the team of pulmonology residents checked him over and declared him recovering well. Literally five minutes after they left he began shaking and vomited. The nurse took his temperature and he had a fever. She waited ten minutes and it was a degree higher. Then his oxygen desaturated to 84 so she put him on blow-by oxygen and called the team back in. They evaluated Apollo and called in the head pulmonologist. After a couple of hours of drama (including three pulmonologists in our room simply watching Apollo and a swab for the viruses) his fever dropped and he drifted off to sleep.

If there’s anything we’ve learned about Apollo, it’s that he never does anything the “typical” way. In fact, it’s been recommended that he be kept overnight for observation anytime he undergoes a general anesthesia, due to his airway issues. 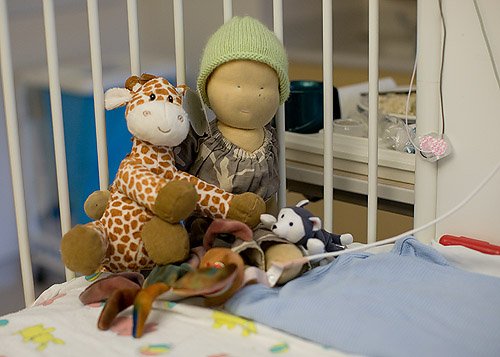 Friends…Apollo’s doll, the giraffe (which he insists is a zebra) from Della, the crab as a souvenir of his upper GI and the dog he got after his swallow study. He’s going to need a  whole bedroom just for the stuffed animals he’s collected from his various medical ventures. 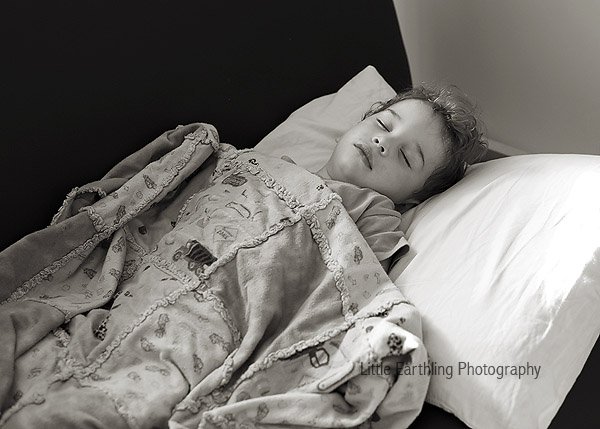 I am still adjusting my mind to the fact I have a very sick little boy. A boy who is put at risk from any respiratory infection. I spent over a year of pushing for tests, insisting something was wrong, and was continually told he was okay, he had allergies, all of his problems were caused by reflux. And now this, being told he will never have a normal airway or esophagus. Being told that we can hope he improves as he gets older. We just don’t know what the future holds, and unfortunately, neither do the doctors.