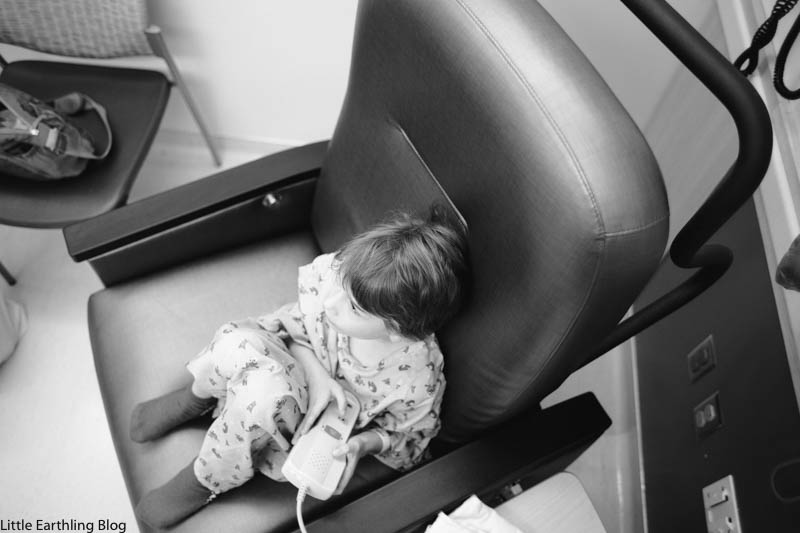 The night before Apollo’s surgical g-tube removal he was awake every single hour. While he didn’t verbally express any nervousness about the upcoming procedure I know the anxiety was just under the surface. I could see it in his restless sleep, his excessive chewing and his need to be close. His biggest question was, “will they give me sleep medicine?”  In his six-year-old mind, all that matters is that he sleeps through any procedures. 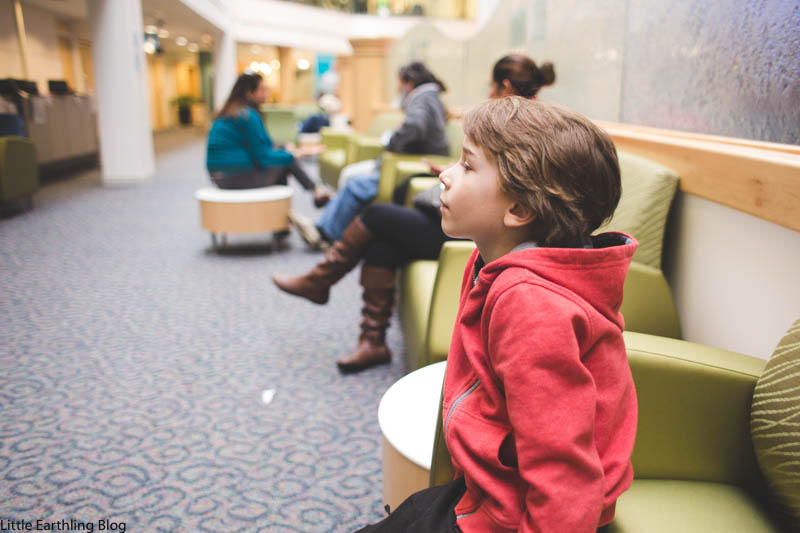 Checking in for Surgery

Going without eating is one of the hardest parts of having surgery for a kid. 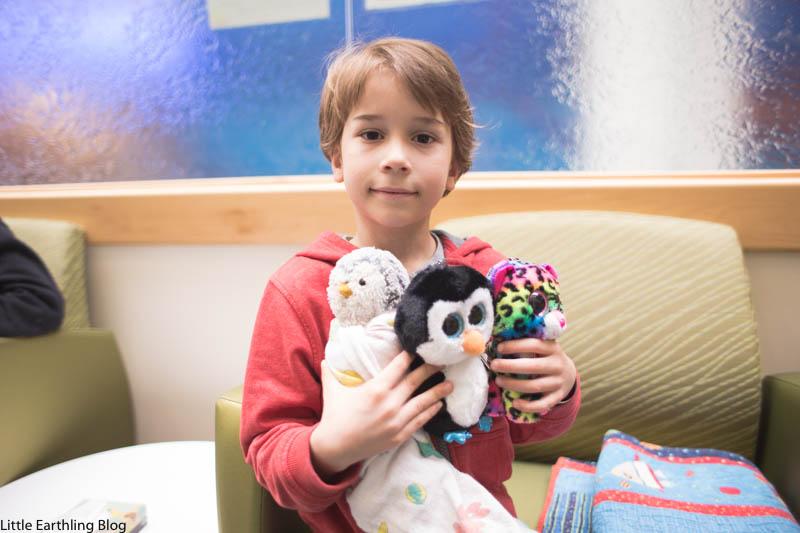 I’m becoming a sucker in my old age. I told Apollo he could pick out a new stuffed animal when he had his surgery. And instead, I let him pick out two. Hey, you only have the seventh surgery once, right? 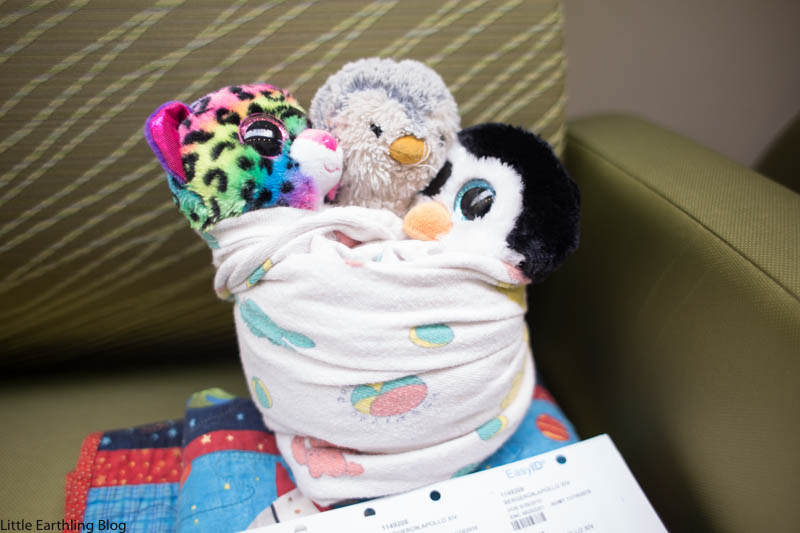 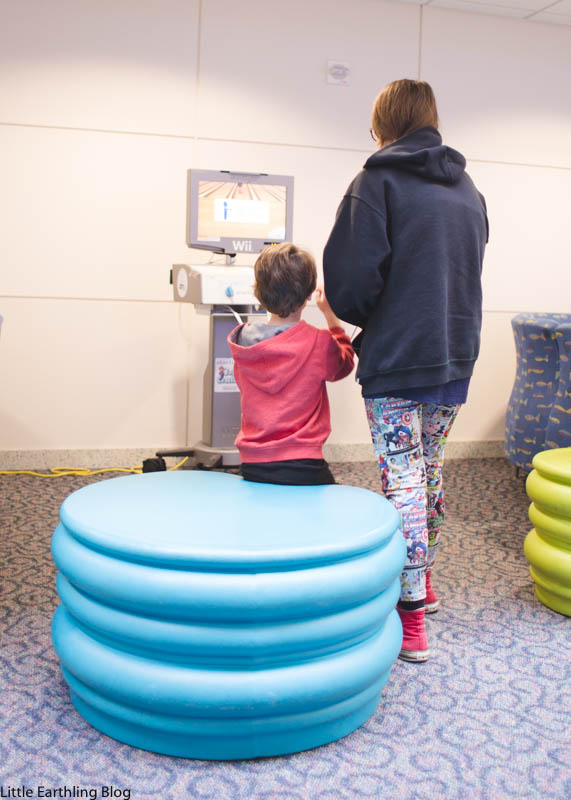 This is the first surgery Chuck hasn’t been there for. He struggled with the decision, but he is crazy busy at work, someone needs to pay the bills and this was a pretty minor procedure. So this time Kalina came along for the “fun”.

In general, I hate it when people call Apollo brave. He didn’t choose to have a heart defect and fight it courageously. He was born this way and has been put through more medical procedures in his six years than Chuck, myself and all of our other kids combined. But yesterday? Yesterday he was indeed brave.

Into the Operating Room

When it was time for his surgery, he walked to the OR. I went with him, but he didn’t ask to be picked up or cling to me. In fact, he walked confidently three feet ahead of me and climbed right up on the operating table. If you have never watched your child be put under general anesthesia, consider yourself lucky. It is always hard (and a little scary) to see your child succumb to the anesthesia.

If you have never watched your child be put under general anesthesia, consider yourself lucky. It is always hard (and a little scary) to see your child succumb to the anesthesia. 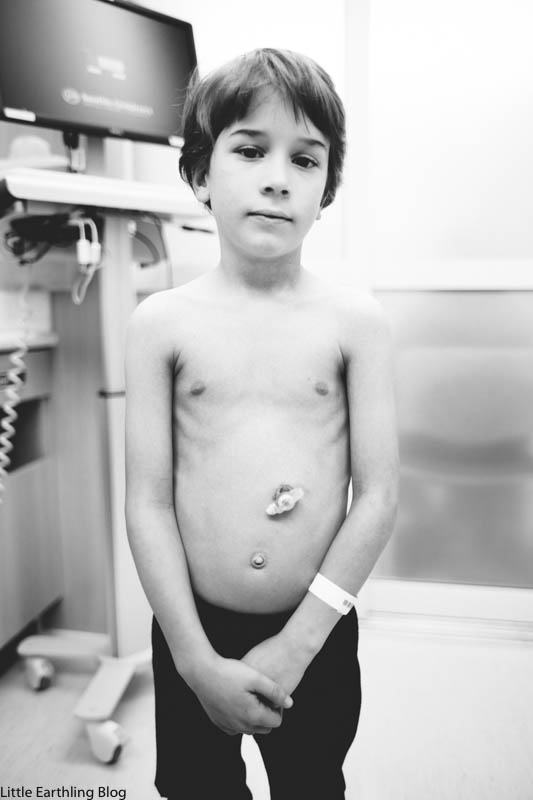 The hospital was insanely busy yesterday. So busy a different surgeon ended up doing the procedure. A nurse told me there is always a rush before the holidays. For those of you (like me) who like technical details here is how the g-tube removal went.

The doctor explained to me that they can’t just stitch up a hole (such as g-tube stoma) because it will just pull together in the middle and the sides will flare (think of a sideways number 8).

Instead, they cut around the hole until it is shaped like an oval and then stitch the skin together. He told me Apollo’s was more complicated than he expected because, in addition to the granulation tissue on the top, he had a large knob of scar tissue on the bottom. He said initially he tried to “cheat” by just cutting through the middle of the scar tissue, but the knob of scarring it left was too big. He ended up going back and leaving a much larger incision than he planned for (though it doesn’t seem terribly big to me).

Apollo has four layers of stitches, all dissolvable. His stomach itself has stitches, then the muscle layer, the fat layer, and the skin layer. On top of that, he has glue (so no stitches are visible).

The doctor said the biggest risks are infection and having the stomach stitches dissolve by stomach acids. Much to my surprise, he said there is still a risk of leaking from the stomach, even with surgical closure. He said the stomach has had an open sore for 4.5 years and the tissue can be weak. In addition, the stomach acids are designed to dissolve stuff. So, we wait and see.

This doctor told me two things (other than granulation and scar tissue) contribute to stomas not closing on their own. Number one is the length of time the tube has been in place (4.5 years is getting up there) and how skinny a patient is. The skinnier the patient, the less like the stoma is to close on its own, so it looks like a surgical closure was a good plan for Apollo.

Today Apollo isn’t in any pain but is very sore. Walking, rolling over and coughing, all bring him pain. We are camped out on the couch watching movies. It would be perfect if it weren’t for a certain hyper puppy who wants to play.