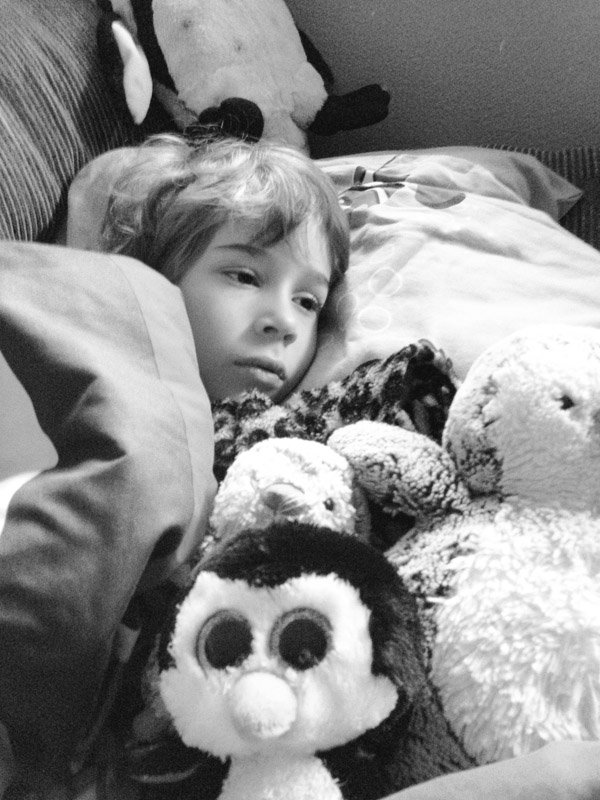 It’s tough to be Apollo. His recovery from his g-tube removal is not going as smoothly as I hoped.

When the surgeon came out to speak to me after the surgery I asked about how much pain to expect.

“It will be tender, like a bruise” he replied. He said it should be totally manageable with a little Tylenol if he even needed that. When we left the hospital, Apollo walked to his mandatory wheelchair. He was tired and groggy but in no pain. He threw up a few times on the way home, but that isn’t unusual after surgery. The doctor had numbed the entire area, so he didn’t feel anything.

Three days in I assume of these two things must be true.

Apollo’s recovery has been very rough and nothing, nothing like a “bruise”.

The next day, day one of recovery was hard. He was walking hunched over, painfully slow, like an 80-year-old man. He was moving exactly like I did after my c-section. Rolling over, sitting up and turning were extremely painful for him.  He was also running a low-grade fever.

Yesterday, day two of recovery was worse. The pain was worse and his temperature higher.

I called the nurse down at Children’s who told me I should be switching between Tylenol and ibuprofen every three hours (standard pain treatment after surgery). I hadn’t been dosing him every three hours because 1) he was only in pain if he moved, 2) the doctor said it would be “tender like a bruise” so preventative pain measures hardly seemed necessary (in his mind) and 3) getting him to take medicine orally is every bit as difficult as I feared.

Since yesterday afternoon I have been doing every three hours dosing. He woke up in pain in the night and then early this morning.

The “no PE for a week” warning seems a little bit silly since he can barely walk. There is no way he could walk up to the bus stop at the top of our driveway, much less attend a day of school.

He is asleep at the moment (after a very bad night) so I have no idea how he is going to be today, day three.

How to Make a Good Impression
Tagged Apollo, g-tube