This weekend ended up being a complete nightmare because Apollo developed an infection at his surgical site.

Was I surprised? No. Was Chuck surprised? No. Were you, friends, surprised? Of course not. It would stand to reason that a person with that much pain after a minor procedure and a persistent fever, with redness at the site, would have an infection.

The Doctors Wouldn’t Listen to Me

I was told the amount of pain to expect after the g-tube removal to be “tender like a bruise”. In the next four days, Apollo had approximately two hours where he sat up and played with LEGO and colored.

I called the nurse at Children’s on Thursday (day 2) that I was concerned about the amount of pain and persistent fever. I was told it was probably normal.

I called and spoke to an on-call doctor Saturday morning about persistent fever, pain, redness, and swelling. I was told “it could be an infection, but it’s a bit early. These are rarely urgent, so you could probably wait and try to get into the clinic next week”.

Chuck and I decided to take  Apollo to a walk-in clinic (since it was Saturday) up here in Bellingham, before driving all the way to Seattle. The doctor at the clinic recommended we take him to Seattle to have it looked at.

We went directly from the clinic to head to Seattle. It was four o’clock in the afternoon and we had nothing packed. No cell phone charger, kindle or entertainment for Apollo. Both of us were unshowered. I am not sure I had showered since Apollo’s surgery. Oh, and the night before Jubilee had a sleepover (yes, I hate them) with 9 junior high girls for her birthday. In other words, we were completely prepared and well-rested.

We sat in the Seattle Children’s Hospital Emergency waiting room for an hour and a half. While Apollo was bored (and tired) emergency rooms are fascinating places. And, since this is Seattle we are talking about, they have Starbucks in the waiting room. While we didn’t choose to imbibe, it is always nice to know that comfort is just a few steps away.

By the time we were called back Apollo had missed a dose of Tylenol and was running a temperature of 38.8 (or 101.8). The ER was slammed, so everything took forever. As luck would have it, the doctor who did the surgery was on call in the ER. The first doctor who examined Apollo agreed that the pain, fevers, and swelling were unusual but kept saying the redness was  “unimpressive”.

While I know she meant this in a medical sense, it was upsetting to me. I had watched my six-year-old son suffering for four days straight. I watched him develop fevers, swelling and redness. I saw him moving with the same slow, planned movements I used after my c-section. I saw what should have “felt like a bruise” make it difficult for him to sit up, roll over and walk.

I resented the word “unimpressive”.

Give the Kids Some Pain Medicine Already, and Double Check the Dose

The doctors wanted to give Tylenol right away to see if that would bring down his fever. I requested the Tylenol in pill form since this is easier for Apollo to take. “Sure!” said the nurse…a different showed up twenty minutes later with liquid Tylenol in a cup. I reminded her Apollo needed a pill to take. Twenty minutes later, I was brought a Tylenol tablet. The nurse handed it to me so I could give it to Apollo. The pill was oblong shaped, exactly like the 500 mg tablets we have at home. I turned it over, curiously, wondering if they had lesser doses since I was still trying to find medicine Apollo could take. When the nurse saw me do that she exclaimed, “Oh, let me check something!” and took the pill back.

Yup, she had almost dosed him with 500 mg of Tylenol. While I realize it wouldn’t have killed him, you would hope the nurse would give him the right dose to start with.

It Looks Like an Infection, But it’s Too Early…

It was repeatedly explained to us that while this certainly looked like an infection it was really too early for a surgical infection which wouldn’t normally show up until after 5-7 days. The doctors all agreed something was wrong and agreed that the amount of pain he was experiencing was “out of proportion” to his surgery. What exactly was wrong was the question of the day.

Apollo is a bright kid. He learned very quickly (over the last four days) that saying he was in pain would result in having to take medicine. Orally.

In order to avoid this unpleasantness, he assured the nurses and doctors he wasn’t in any pain. Thankfully these well-trained medical professionals know what a kid in pain looks like, even as he stoically denied it. Denied it when it wasn’t being touched, that is.

Just brushing the skin near his stomach caused him to grimace and cry out in pain. Options were tossed around: an ultrasound, taking him to the OR to open the wound, checking his white blood count, x-rays, and urine samples. In the end, they decided on an ultrasound of the area (along with other tests). I decided that Apollo had experienced enough pain and trauma in the past four days and insisted he gets pain meds first. Of course, an ultrasound isn’t a painful procedure in itself, but just brushing the skin of his abdomen was so painful, I knew running an ultrasound over the top of the area would be excruciating. Luckily, the doctor agreed and ordered pain meds.

Less than five minutes later, in a miraculous bit of hospital efficiency, someone showed up ready to take him for his ultrasound. I let the tech know the doctor agreed to pain meds first.

Eventually, they gave him a dose of morphine and then took him off for his ultrasound. Chuck went with him while I stayed back in the ER room. Chuck informed me it was still painful (but endurable) with morphine. Yeah, a little more painful than a bruise, I’d say. 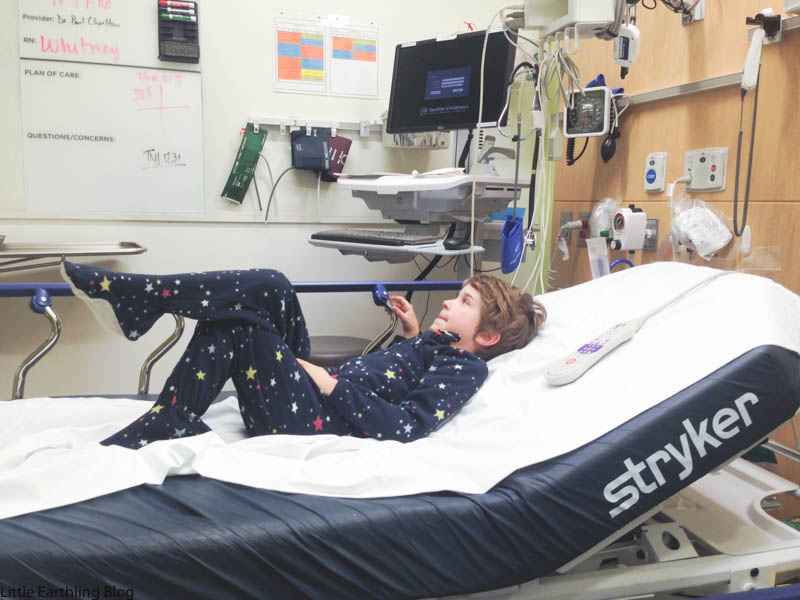 Morphine and Movies. This is how we party with our six-year-old on the weekends.

The ultrasound revealed two pockets of fluid in two different layers of his abdomen. The one in the top layer was significant and the doctors said it needed to be drained. We were told that there was no way to know what the fluid was. I could be pus or just a layer of blood. Either way, they felt it was likely the source of his pain.

Options were discussed for sedation. I told the doctors that after safety, my next priority as comfort. Whatever they did, they needed to make him comfortable. They decided on Ketamine.

I will continue this in the next post because it is getting ridiculously long.