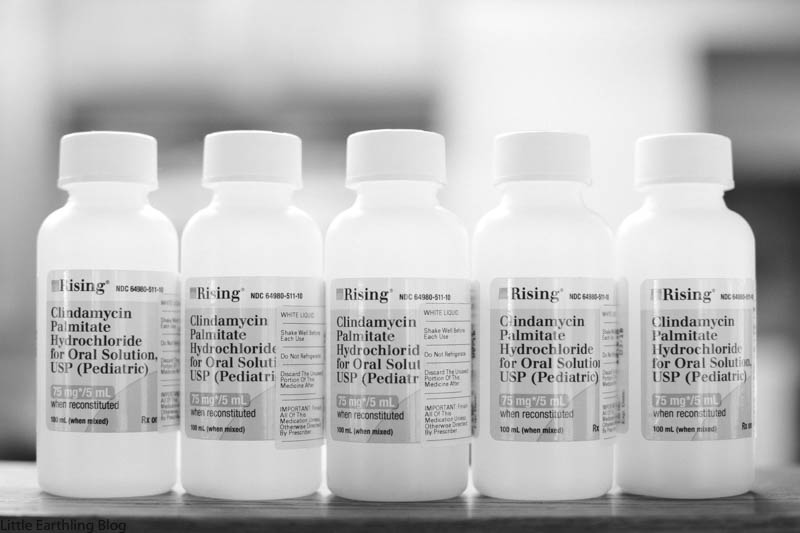 This is part two. You can read the first post Infection After G-Tube Closure here.

Options were discussed for sedation. I told the doctors that after safety, my next priority as comfort. Whatever they did, they needed to make him comfortable. They decided on Ketamine.

The doctor told us we could stay and be present for the procedure or leave the room. I didn’t even need to look at Chuck or ask what he thought. Of course, we wanted to stay.

As it was explained to us, Ketamine is a sedative that makes the patient unaware, is an anesthetic and the patient will have no memory of the procedure. Sounds perfect, right? The anesthesiologist told us Apollo’s eyes would start to shake back and forth, but not to worry because that just told her the medicine was working. What wasn’t explained to us or what I didn’t fully understand at the time, was that his eyes would be open the entire time.

But let me back up. 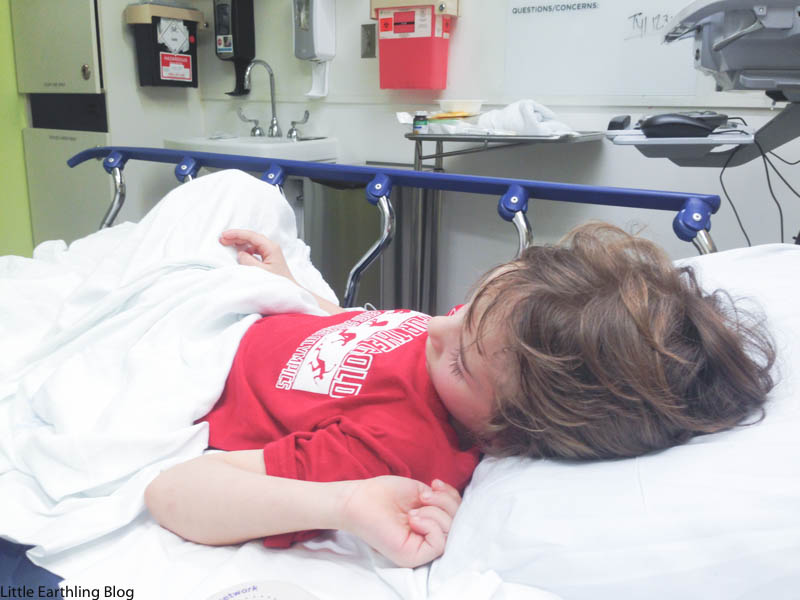 The doctor wanted Apollo to have Zofran before the Ketamine to combat nausea. In came a nurse with a dissolvable tablet that she wanted to place on his tongue.  He was sick, feverish and on morphine. By now it was past 1 AM and Apollo was sleeping. The nurse asked us to wake him and put the pill on his tongue. It took several minutes to get him awake.  When she finally got the pill on his tongue he spit it out and clamped his teeth down. At this point, she said, “Hmm…let me see if I can just put liquid Zofran in his IV“.

Gee, I wonder. I see my birth clients get Zofran in their IVs all. the. time.

A team of seven doctors and nurses assembled (all in yellow precaution gowns ) for the procedure. There was the surgeon who did the original surgery, the doctor who did the procedure, an anesthesiologist, a resident, and three nurses. It was one of those moments when you wonder whether it’s a great thing that 7 people are caring for your son on a very busy night in the ER..or something you should be concerned about.

Equipment was wheeled in and Apollo was given the first dose of Ketamine. His eyes opened (he had been asleep up until this point) and he began to look around. The doctor began swabbing his stomach with disinfectant and he brushed her hands away. Umm…wasn’t he supposed to be more or less unconscious? The doctor waited another minute or two and then tried again. This time he didn’t flinch. After swabbing the area the doctor peeled off the glue over the incision.

Next up was a scalpel, inserted into the stomach of my son who was looking around the room. The doctor reminded us, “I’m not cutting his stomach, I’m just cutting the stitches”. Except we all know that after four days of being stitched and glued together the skin was indeed being cut.

As soon as the layers of skin were cut, thick yellow pus bubbled up from the incision. The doctor inserted a tong-like instrument and opened the wound more. Now the pus, tinged with streaks of blood, poured out. So much for it being “too soon” to have developed an infection.

Chuck and I are not squeamish at all. But watching your son, eyes open and roaming the room, be cut open and seeing pools of pus ooze out of his six-year-old belly? That’s a lot for a parent to take in. My eyes traced a path between Apollo’s face, Apollo’s stomach, the doctor doing the procedure and the anesthesiologist. At this point, Apollo started up with a groaning that sounded like a scene from the exorcist.

As the doctor began pouring sterile water into Apollo’s abdomen to clean it out Apollo began saying, “Mama, mama, mama…” which faded into, “ma…ma…mm….mmmmmmm”. It was downright creepy. And heart-wrenching.

Every few minutes the anesthesiologist gave Apollo another dose of Ketamine, speaking her actions out loud so a nurse could record the time. The doctor, deciding the area was clean enough, packed his tiny belly with gauze, leaving an inch long strip hanging out. At this point  Apollo started saying, “go home…go home…home…home…home…” which convinced me he was indeed aware that something unpleasant was taking place in his body. If you wonder why I look old and haggard these days, this is one reason why.

Packing the Wound and Leaving it Open

The doctor explained they were now going to leave the wound open with the wick of gauze hanging out. They want air to be able to get into the wound to discourage the growth of bacteria. Then she explained that I would need to pull the gauze out on Tuesday. Yes, there is at least a foot of thing gauze in his open surgical site…and I have the pleasure of pulling it out.

We really know how to have a good time around here, my friends. 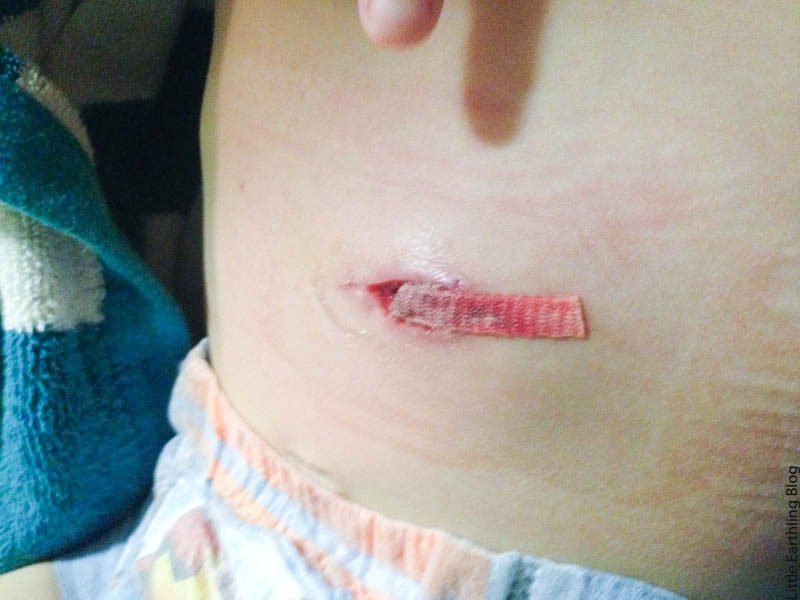 Waking Up from Ketamine Sedation

Apollo was bandaged up and he began to stir. He reached up, attempting to pull the nasal cannula out of his nose. The anesthesiologist laughed and said, “If you can pull that out  you are aware enough to not need it!” True to form the boy woke up fast.

“Mama? Mama!” were, of course, his first words.

“I’m right here,” I said, moving right above him so he could see my face.

“You have three eyes!” he exclaimed.

“Are they pretty?” I asked.

He paused for a moment and said yes.

He was high as a kite, trying to talk, not making a lot of sense. Apparently, Chuck had four noses “because two plus two is four”.

Apollo was full of psychedelic wisdom.

As Apollo took a trip upon the magic swirling ship, the doctors gave us the run down.

The gauze needs to be removed on Tuesday.

Apollo needs to been seen in the clinic (in Seattle) later this week to check the healing process.

Apollo needs to take an oral antibiotic for ten days.

Remember when I said one of my biggest worries was Apollo needing to take pain medicine after his surgery? Because in all of the progress we have made in the last four years, teaching Apollo to eat, liquid medicines are one of his most difficult challenges? It looks like we are going to face that giant right out of the gates. He now has five bottles of antibiotic that he needs to take in the next ten days.

Half a bottle a day.

In addition? Now that he has had an infection at the g-tube closure site, there is a “significant risk” that he will develop a stomach fistula.

That is a hole in his stomach.

That will need to be surgically closed.