When a G-Tube Falls Out

{All photos in this post taken with my iPhone} 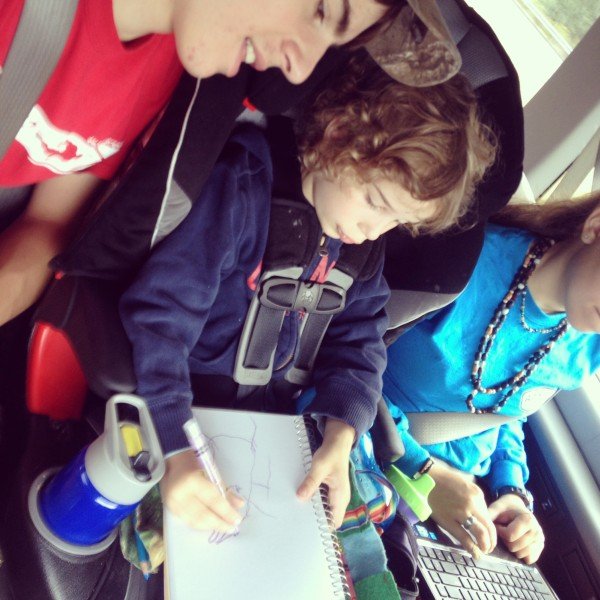 To say Friday did not go as planned would be a massive understatement. Friday was Apollo’s pre-op appointment for his upcoming bronchoscopy/sleep endoscopy/tonsillectomy. It should have been a breeze…such a breeze that Chuck and I made plans to meet  up with some new friends who live in Seattle. Plan A was to leave early and head to the zoo to hang out (Molly and Eric have eight kiddos). The first change in plans  occurred when Chuck had a morning meeting at work, so we left later than we planned…then we got caught up in traffic…and it was raining. We finally arrived in Seattle with only 30 minutes to hang out before the appointment. Molly took it all in stride, and offered to stay at the park with the kids while we went to our appointment. Mordecai and Avi chose to come with us and play in the sibling play room, and Tucker came along due to his anxiety. That left Molly with fourteen kids…her eight and six of ours. 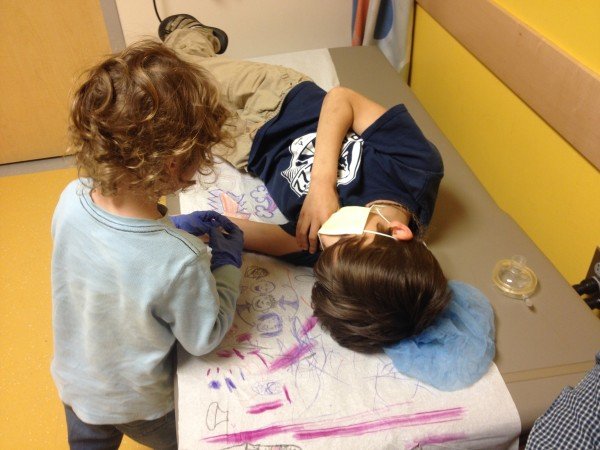 The pre-op went well. The nurse knew Apollo’s history well, including his horrible experience with anesthesia last time when the anesthesiologist made a note that he was an “unhappy” child and needed versed and any other comfort measures available. The purpose of the visit was to make sure Apollo is healthy enough to withstand surgery (which he is) and to go over any special considerations. After that, the nurse sent in someone from Child Life to work with Apollo…who unfortunately was asleep by then. She did get to talk to Tucker a bit, which was really great. Then she brought in a little medical kit to help Apollo get used to some of the items used…he woke up shortly after she left and the boys got to explore with their new tools. 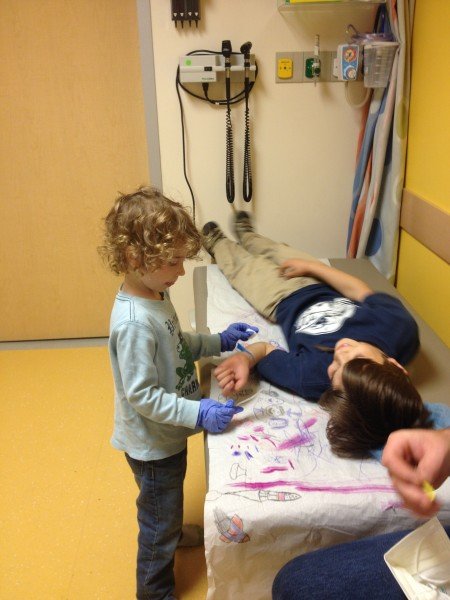 Chuck and I were exchanging glances, thinking how great this was for them…such good therapy for both…when will I ever learn that just when I think things are going well I really, really need to brace myself for the upcoming storm?

At the end of our appointment Chuck asked the nurse if someone could look at Apollo’s g-tube. She made a few calls and ended up sending us to the GI clinic. Apollo has been having trouble with his g-tube all summer.

{Click here to see a mic-key (g-tube) image, so you understand what I am describing}

July 10th he saw a doctor about the scar tissue around his stoma. He has built up so much that the tube is pushed down at an angle. The doctor on that day took out the old tube and replaced it with a new one. He added 10 mls of water to the ballon rather than the 3-5 mls we usually add. It began hurting Apollo immediately. In fact, I paused in the parking lot and almost took him back in…but then he seemed okay. The super tight g-tube irritated him and became red and raw again. I added KY jelly daily as the doctor instructed. August 9th he developed a full-blown infection and a week later a fungal infection from the antibiotics. He has an appointment with his GI doctor August 22nd, but a few weeks is a long time with a raw irritated body part. It has been bothering him so much that touching it at night to feed him causes him to whimper and sometimes even wake up. We were thrilled when he was going to be seen in the GI clinic.

After a short wait, a nurse, resident and student came in. The resident looked at Apollo’s stoma and scar tissue. Both he and the nurse said they thought it should be surgically removed. We discussed seeing if we could coordinate having the tissue removed while he is under anesthesia for his other procedures. When the resident heard how much water the doctor in Everett had put in the tube, he decided to check and see how much was left in it. This, of course, upset Apollo, because it is very sore. He was screaming and I glanced over to see Tucker with his hands over his ears, eyes squeezed shut tightly, bent over, trying to escape the screaming. I quickly suggested he wait out in the hall, which he did.

The doctor had trouble getting water out of the balloon…in the end he was only able to remove 2.5 mls. He was confused by his inability to remove more. I asked him if the tube was secure (after he removed the water). “It’s not going to come out?” I asked. He assured me it was fine. A few minutes later, as we were getting ready to leave, Chuck asked, “Are you going to replace the water you removed?” and he said no, since he was only able to remove 2.5 mls anyway.

We rushed down to the playroom to pick up Mordecai and Avi. Apollo was very sad that he didn’t get to play in the playroom, since it was closing. We left the hospital at 4 o’clock and arrived back at the park a full 3.5 hours after we left Molly with the kids. She had fed them all lunch and they were still going strong and having a grand old time. We were in the park for about 15 minutes when Chuck took Apollo to the bathroom. He came back with Apollo inthe stroller and said, “Renee, can you come and look at something“. I walked over and saw a bit of blood soaked through the outside of his shirt. Then he lifted it up to reveal a puffy, red stoma with no g-tube in it. Just a hole in Apollo’s stomach. When a g-tube falls out, it needs to be replaced as soon as possible. Stomas close very, very quickly (they can close completely within a few hours). To add to it, his was already inflamed. We told Molly we needed to head back to Seattle Children’s Hospital…this time to the ER. In less than five minutes we had 18 kids loaded up into two full-size vans, heading to Molly’s house. We dropped off the kids, including a sobbing Tucker. We had to leave him this time, because we knew whatever happened at the ER was going to be painful…

{I replace Apollo’s g-tube every three months at home. We didn’t attempt to replace it this time, however, because of the irritation and inflamation and we were so close the the hospital we had just left.} 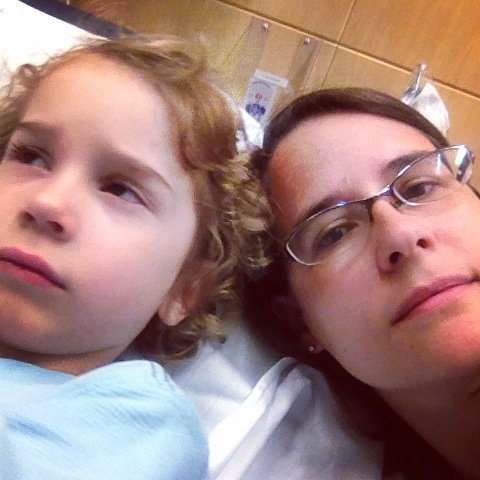 I won’t go into all the details…we were seen quickly in the ER. After a short discussion about whether to dialate the opening or just try to force the new tube it, the doctor decided to just try to put it in. Apollo was pinned down and the tube shoved back in. It took much more force that Chuck and I (as parents) would have ever used on it.  It was very, very painful. He screamed and cried and was hysterical. Once the tube was in, the doctor and nurse left us so he could calm down. I told the doctor after what happened I needed to be totally confident that it wouldn’t fall out before we were sent home. First we needed to make sure the tube was placed in his stomach (they pulled out stomach juices) and that it was functioning (we put in pedialyte and made sure he could keep it down). Finally two hours laters, we headed back to Molly’s house. 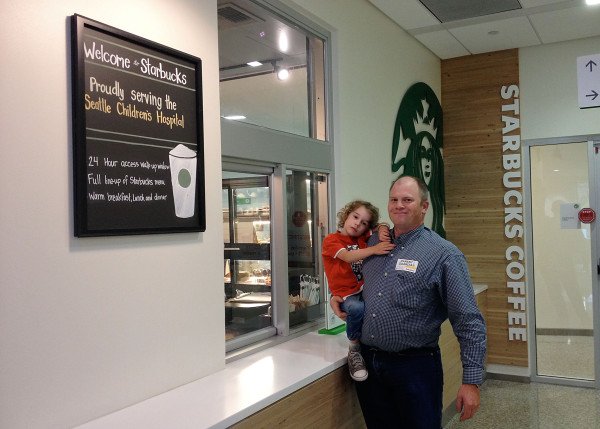 In the meantime, she had fed the kids and they were still playing happily eight hours after meeting in the park. When we arrived back at Molly’s house, her husband Eric, who is a foot surgeon, told us Avi had an ingrown toenail. So before we left Seattle, he took Chuck and Avi to his office and removed the ingrown nail. Oh yes he did.

And finally, finally, we left Seattle shortly after 10 PM to start our two hour drive home.

I can tell you this, never, ever will a resident  touch Apollo’s g-tube again. I realize doctors need to learn, but they have learned enough on Apollo. To clarify what happened: the resident accidentally removed all of the water from the balloon in his mic-key causing it to fall out at some point. Chuck and I both questioned the resident about whether or not it would be okay, and were assured it would be fine. Only it wasn’t. And his mistake caused Apollo more suffering and gave him another horrible experience at the hospital and more trauma to his tube.

The Die Hard Homeschool Mom Sends Her Son to School