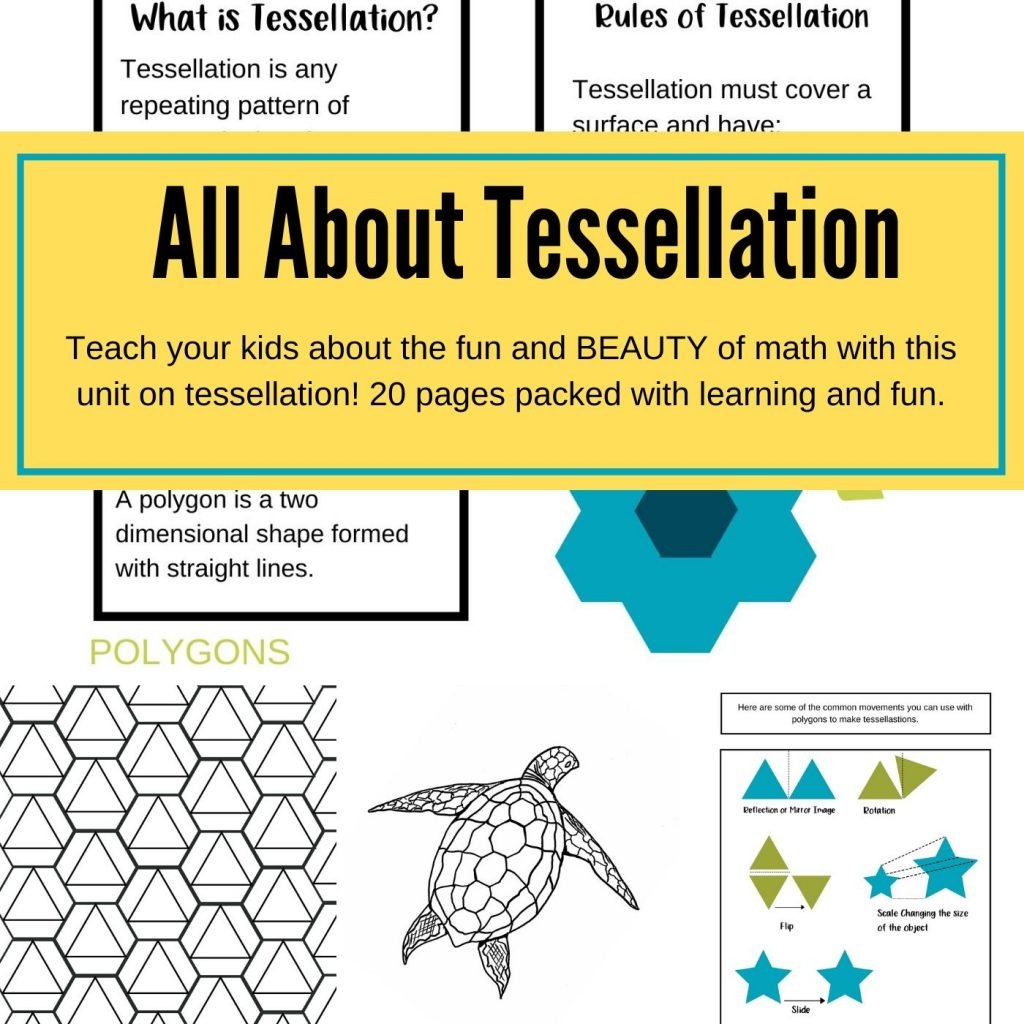 Hey guys, I am really excited to share this with you. I have been working on it for a long time. I hope you love it as much as I do.

Tessellation is one of those math concepts that for some reason, many people can’t remember learning about in school. Simply put, tessellation is a pattern that has no gaps and no overlaps. Tessellation is all about shapes and how they work together so this unit study is perfect to include while teaching about geometry.

People have been using forms of tessellation in art and decor for thousands of years. While people gave a name to tessellation is it not a man-made concept. Tessellation surrounds us in the natural world, in in plants, and animals, and the earth itself.

M.C. Escher was a Dutch artist who made tessellation as an art form famous. Escher lived from 1898 to 1972. He originally went to college to study architecture, but became enamored with the intersection of art and math and became a graphic artist instead. I am sure you have seen his work around even if you don’t recognize it.

This Tessellation Unit is Perfect for Kids Who Hate Math

Let’s be honest, not everyone loves math. In my experience, no matter what I do some of my kids take to math naturally and easily and others struggle. Learning about tessellation is a great way to show kids who have math anxiety how much fun math can be. Creating real works of art using mathematical principals? How cool is that?

To combat this, I am always on the lookout for quality books and resources to show my kids the fun, fascinating, and beautiful side of math. Below are tons of links to help you show your kids the beautiful world of tessellation!

All About Tessellation Unit Study This is a 20-page unit study I designed especially for kids in grades 3-6 but it can be used for both older and younger students. It includes photos and instructions on how to make your own tessellation art. Your kids will learn about M.C. Escher and Sir Roger Penrose is a mathematician who worked with Stephen Hawking to prove the existence of black holes.

My post Books That Will Help Your Kids Love Math has is a list of spectacular books to teach kids math. In fact, if you surround your kids with these picture books about math, not only will they effortlessly pick up math concepts, but they just might learn to love math along the way.

Toads and Tessellations – This is one of the few books about tessellation I have found that is geared toward kids.

“Enzo is the son of a great magician, however, unlike his father, his spells create chaos instead of order. What really interests Enzo, more than books about magic, are books by and about the lives of famous physicists and astronomers like Galileo Galilei and Johannes Kepler. Enzo dreams not of becoming a magician, but a mathematician instead. When Tessel, the village shoemaker, is called upon to make twelve identical shoes out of only one piece of leather, Aida, the shoemaker’s sister, goes to Enzo’s father for some magic to help her brother.”

This book is about shapes in general, not tessellation specifically, but fits in nicely with a unit on tessellation.

“Friday is Zachary Zormer’s favorite day of the week. At least it is until he realizes he forgot this week’s assignment, “Bring in something fun to measure.” Tyler, the class show-off, brings a picture of himself from the newspaper. How can Zack top that when all he has to work with is a piece of paper he finds in his pocket? Week after week Zack takes on a different math concept (length, width, area, perimeter) with surprising projects including a mobius strip, a paper frame large enough to step through, and a light show that demonstrates how the sun heats the earth.”

You already know how much I love these books! The Warlord’s Puzzle introduces the Tangram puzzle with a delightful story.

I highly recommend Faber Castell Coloring Pencils. These are literally the only colored pencils I will buy. They are durable and give rich, vibrant, colors.

TeachKidsArt: Tessellation This site covers the basics of tessellation and is written for kids.

Are you familiar with pattern blocks? Almost every preschool and kindergarten has them. These are perfect for introducing the idea of tessellation to your kids. You can buy them online (or print some onto cardstock) and grab some free pattern block worksheets here.

I hope these resources help you and, as always, please add any additional resources in the comments.

The Best Way to Teach Kids About Elections
Tagged Printables