The Family Next Door: The Heartbreaking Imprisonment of the Thirteen Turpin Siblings 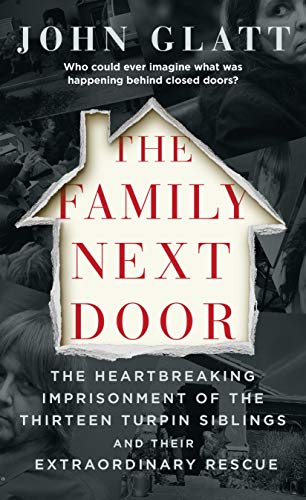 The Family Next Door: A Review of John Glatt’s Book About the Turpin Family

It probably won’t surprise you to learn that my interest is piqued every time I see a story about a “large homeschooling family” that is accused of child abuse. The story of the Turpin family caught my eye in particular because they had thirteen children which are large, even in large family circles.

I purchased the book The Family Next Door myself and was given no compensation for this review. This review contains Amazon affiliate links.

The Turpin’s House of Horrors

Like many people, I read the first few articles that came out about the House of Horrors. There wasn’t a whole lot of information, so it quickly faded from my mind.

I recently discovered writer John Glatt (you might remember my review of My Sweet Angel) and was excited to see he had written a book about the Turpin family.

*And incidentally, his book, The Perfect Father, about Chris Watts is coming out in July and I definitely plan on reading that as well.

The story of the Turpins has been confusing from the beginning. One reason is that so much of the information available is conflicting and this was true in the book as well.

I am not blaming Glatt for the inconsistencies, I have seen them in the news articles I have read as well. It just adds to the mystery of this family and tells me know one is quite sure what happened with this family. Probably not even the kids themselves.

Why Did the Turpins Continue to Have Children?

This part of the story is most confusing to me personally. They were obviously abusing and neglecting the children. The older children were starving, sick, and many of them were chained to beds. If you are that overwhelmed, why would you continue to have children? I just can’t wrap my head around this part.

Some people (including members of the Turpin’s family) have speculated that they were trying to get their own reality TV show like the Duggars. This makes absolutely no sense to me, since they were chaining kids to beds, the house was full of filth and feces, kids didn’t bathe or get fed on a regular basis, etc. I don’t believe these two were so far removed from reality that they believed someone could come into their home and find it acceptable.

Their House Was Full of Toys

This is mentioned in the book and can be seen in photos online. Several of the children’s bedrooms were full of toys…many of them brand new in unopened packages. WHY would you buy toys for your kids, bring them home, then just leave them strewn all over, unplayed with?

The Parents Moved Out Leaving the Older Siblings in Charge

At one point in time, they moved a couple of hours away for nearly four years! Louise and David Turpin took the youngest children and moved to a new house. They would go back every two weeks or so with food and check on things. Despite this, no one went for help. I have read enough True Crime to know all about Stockholm Syndrome, but it is still hard to understand how these parents could have so much control over these kids (and adults) even when they were gone for weeks at a time.

This book is well-written and I certainly learned some new details about the family and how their life and marriage began. I definitely recommend but in the end, I am left with even more questions than I started with.

If you are interested in True Crime I highly recommend checking out John Glatt’s books.