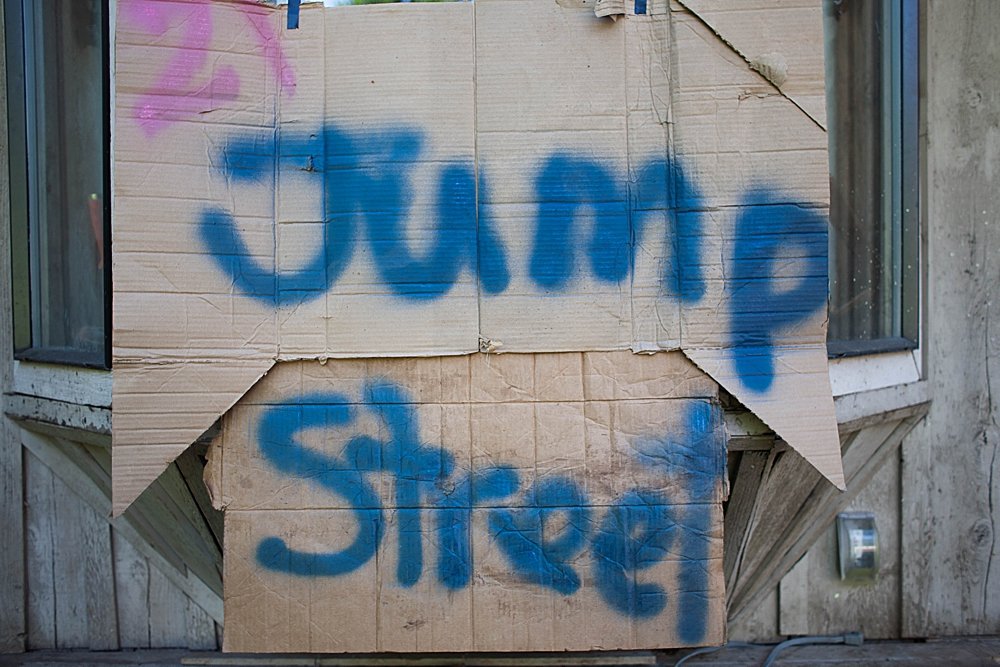 A few months ago I bought the original 21 Jumpstreet series from Amazon and started watching it with our teens. I was happy to see the series was just as good as I remembered  and that my teens loved it just as much as I did (and do).

Well, at our house if you really, really love a movie or book the next logical step is to throw a themed party. We picked a date, invited friends, and Tilly worked hard scouring Goodwill and her closet to make the perfect costume to be one of the McQuaid Brothers (or in this case, sisters).

Friday night, when I had done nothing for the party except make a list of ideas, I was tempted to cancel….but didn’t. Instead, I kicked things into gear Saturday and got in over 10,000 steps just planning, prepping and hosting our party. Lesson? Throw more parties! Or plan ahead, but, whatever.

We all know no party is complete without lots of food. Here’s what we served.

Ioki’s Sushi (we used this candy sushi recipe, of course)

Chips and pop (in the first episode Captain Jenko tells Depp’s character he has to learn to eat like a high school student: chips, pop, pizza, etc).

We got some old cardboard and spray painted them with graffiti. Tilly and I both have a whole new respect for graffiti art; it’s a whole lot harder than it looks!

As usual, my party budget was small, but this is where creativity comes into play. We decided to go generic 80’s and police theme for decorations and this is what we came up with.

I showed Mordecai these LEGO pac man ghosts on Pinterest and he went to town making them for our table.

The few things we purchased were: a police badge and ID, fake money, candy cigarettes (yeah, I can’t believe they still sell those either). Chuck already had caution tape and Tilly had washi caution tape.

You can check out my 21 Jumpstreet Party ideas to find links to all the products.

Stick up a lineup photo wall and take pictures of your guest. Our kids loved this! Use black washi tape and it will peel off easily.

The other game that we played, which turned out amazing was a version of clue, with people instead of a board game. I wanted to do some type of murder mystery, but didn’t want it too be gruesome or scary…I scoured the internet but didn’t find anything that fit my vision or budget until I stumbled on this post from Confetti Sunshine. I took the idea and decided to give it a 21 Jumpstreet theme and run with it.  The game clue is really just based the process of elimination so it was easy enough to come up with my own version.

How to plan your own Murder Mystery

I needed three things (like the game clue): A person, a place and a weapon. I typed up a list of 14 in each category and made a spreadsheet (see photo above). Some of the people were: student, principle, cheerleader, lunch lady, boyfriend, policeman, etc. Then I used places around the school/police station such as: locker room, library, cafeteria, headquarters, squad card, etc. The weapons included your normal suspects: knive, gun, rope and I included a few silly ones like bubble gum and (Apollo’s suggestion) a lion!

I made a copy of the spreadsheet for everyone playing and made one master list for me. I got 14 envelopes (one was the master envelope). I put one clue from each category into the envelopes (including the master one). I also put fake money into each envelope. When it was time to start the game, each player opened their envelope and saw one person, one place and one weapon. Since they had these clues they knew none those were in the master envelope, so they could mark them off of their spreadsheet.  They got the rest of the clues by asking each other questions. The only rule was if someone asked you if you had a person/place/weapon you had to answer honestly. Other than that, all bets were off.

It was hilarious to see everyone start off following the accepted social rules…and see them slowly fall away when they realized they could copy, sneak or bribe each other for answers! There were two winners in our game, the one who solved the crime and the one who ended with the most money. I would say this game lasted 15-20 minutes. It really was the highlight of the party. People got more and more creative (and desperate) as the game moved on. In the end, Devon solved the mystery and Elijah ended up with the most money. Everyone started with either $95 or $100 and Elijah ended the game with $415!

All the clothes you see were either in our closets or purchased at Goodwill. This was one of the most fun themed parties we’ve ever had!