Thanks to The Bully Project for sponsoring my writing. Visit their website to join the movement and learn more.

Have you heard of this new documentary? Personally, I can’t wait to see it. Maybe it’s just because I am so tired these days, but I found myself moved almost to tears just from the trailer. I’m definitely not too old at 36 to remember what kids were like in jr. high and high school.

Ever notice how kids in schools (or other groups) can immediately pick out the “weakest” member? The one kid who is a bit weird…or quirky…or maybe nothing at all is outwardly different, but another kid or two starts picking  on them and pretty soon it becomes some kind of wild feeding frenzy? I’m sure the teachers in my schools would have said that kind of thing wasn’t “tolerated” or “acceptable”. Well, tolerated or not, it happened. It happened in the public schools I attended and it happened in the very small private Christian school my husband attended.

I am thrilled to see this topic being covered like this. As a mom to adopted African children, special needs children, a bi-racial child, an African-American child and some just plain quirky children, I believe things can change for the better. 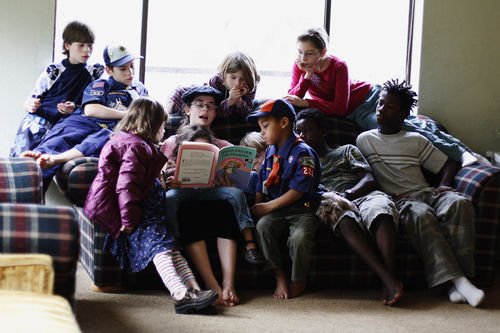 I’ve thought a lot over this past school year, as Mordecai attends public school, how much things have changed since I was a kid. When I went to school, the kids in Special Ed were the ones who were a bit quirky…slow perhaps…mildly learning disabled. Now, for the most part, those kids are in the regular classes (with plenty of support, for sure) and the kids in Special Ed (at Mordecai’s school, anyway) are much more severely disabled…in wheelchairs, non-verbal, Down Syndrome. I don’t know exactly where those types of kids where when I was growing up…and special schools? Being homeschooled? I don’t know, but I think we are making progress by including more of the “quirky” kids and building tolerance for their differences.

How about you? Do you remember bullying from your childhood days? Chuck and I grew up in different countries…he attended two different schools, I need both hands to count the  number of schools I attended…we can’t be the only two who went to schools where bullying took place.

I was selected for this sponsorship by the Clever Girls Collective. Find showings in your area for The Bully Project and buy tickets here.

Why I Love My Children