This was sweet Apollo, four weeks ago. 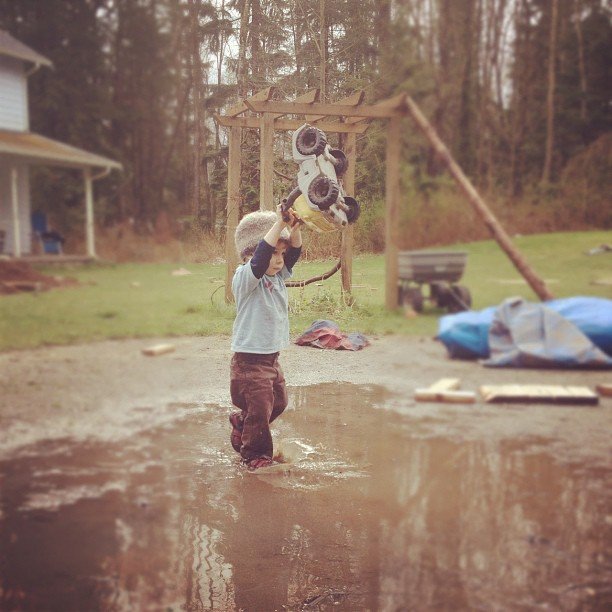 So how are things, one month post-surgery?

Physically, Apollo’s wound has healed well. We can now lift him under the arms again. Surgery is a memory…a 2 3/4 inch scar on Apollo’s back will always remind us of his journey. His journey that we are still clearly in the middle of.

His breathing is still as bad as ever (patience, I know).

He has had one major choking incident and a handful of smaller ones. Much, much better than before.

His anxiety around bedtime has lessened…but he often isn’t falling asleep until 10 o’clock…which means I have no Apollo-free time (hence the lack of blogging). He has to be rocked to sleep at night and at naptimes. Prior to surgery we could simply put him in his crib at 8 o’clock with the other kids. He was up numerous times in the night, but at least I could count on some down time every evening.

We have tried: Valarian, melatonin, Bach’s Rescue Remedy, essential oils and a couple of other “calming” remedies. We’ve seen our family doctor, our naturopath and a sleep specialist. He has been taking anti-anxiety medicine for three nights now…it seems to help him wake up screaming less…but certainly isn’t helping him fall asleep.

He is taking an antihistamine to increase appetite. Eating and getting him to eat is still a struggle. That means, my oral-aversion one year old is taking medicine SIX times a day. Six times a day I force medicine in his mouth (reflux meds 2x, antihistimine 2x, melatonin and anti-anxiety)…I feel like it’s counter-productive most days 🙁

Remember my post about Licensed characters? Well, prior to surgery I borrowed some DVD’s from a friend, assuming they would come in handy the first days post-surgery. Among them was Winnie the Pooh. The first week or so when we were supposed to keep Apollo from running around too much, we let him watch it. Every day. Sometimes more than once. Well, now he is positively obsessed with Pooh and all the other characters. He will pretend to be Piglet and point to me and say Christopher Robin. There is one point in the movie where Pooh is hallucinating about honey and there is a song with the words, “honey, honey” over and over. Apollo will come up to me and say, “Nurse, honey, honey?” It’s hilarious (exept the whole my one year old watching a move sixteen zillion times). He also likes to yell, “Anybody up here?” and various other lines from the movie. Someone please tell me it’s normal for him to be quoting movie lines…

Apollo has also, interestingly, become obsessed with what he calls space-a-rockets. Too cute!

Two weeks post-surgery we began taking him out for the first time since fall…and he promptly got a cold. So he’s back in isolation.

He is as active as ever, though I can’t tell you how sad it makes me to here him completely out of breath as he plays. While his heart is considered “fixed” it is quite clear his medical issues are not.