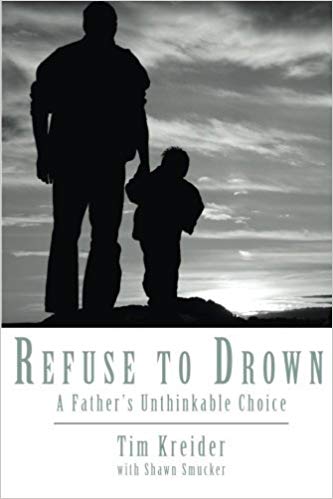 I recent read the book Refuse to Drown by Tim Krieder and Shawn Smucker. First let me say that Tim Krieder is amazingly brave to share his story. He and Shawn Smucker did a great job on this memoir. This book is both easy to read and compelling. Kreider does an excellent job of conveying his feelings of confusion and grief throughout this book.

Tim Kreider’s small town is shaken by a violent triple murder. Krieder’s son Alec is good friends with one of the victims (his parent’s were also murdered). Kreider worries about how his son will handle the emotions of having his friend murdered. He is shocked weeks later when his son confesses to the murder.

Refuse to Drown isn’t a story of his son’s crime. It is a story of how he struggled and learned love and support his child, no matter what. I know that description sounds like a real downer, but this book has stuck with me. Kreider discusses his feelings as a father and how his faith in God sustained him. This book is not full of trite Christian and answers and a happy ending. Instead it speaks of a father’s love and his honest, brutal struggle to come to terms with his son’s horrible crime.

I don’t really know what else to say about it, and I’m rarely at a loss for words. So here it is: get a copy of the book and read it. You won’t regret it.