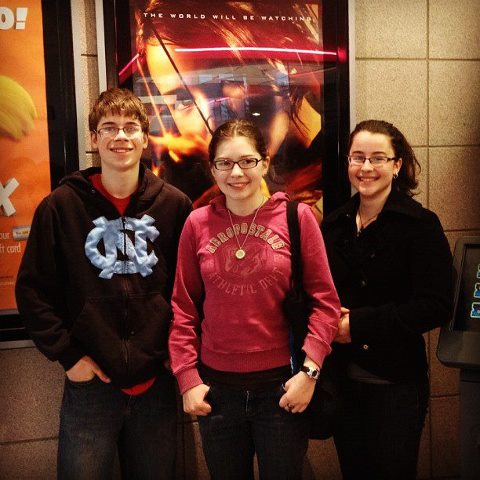 If you read my blog, you probably haven’t missed the fact that my older kids are Hunger Games fans. I read the books at the prompting of my children. I didn’t love them…mainly because I feel like it’s an old story that’s been rehashed enough. I didn’t feel like Susanne Collin’s version is particularly clever. Stephen King wrote about reality games and fighting to the death back when I was a teen. Add that to the fact that these books are written for teens, and it just isn’t my style. But, I love my children dearly, and told Chuck months ago I wanted to surprise the older three by taking them to see the Hunger Games in the theater. They’ve been asking to watch it and I’ve been hemming and hawing…they had pretty much come to the conclusion that they would have to wait for it to come out on DVD before they could see it.

Little did they know, I bought the tickets online as soon as they were available. I also contacted Adalia and Tilly’s friend’s mom (wow, that was complicated) so she could come along too. As it turned out though, Devon was sick, but her brother, Judah’s friend got to come along!  My girls made executing this plan simple by asking me to take them to buy fish for their aquarium. All I had to do was invite Judah along!

You should have seen the looks on their face when I pulled into the mall/theater parking lot. I could see they were hoping…but not wanting to be disappointed. So, I pulled the tickets out of my bag…let’s just say I had three very happy children.

For a great, concise review, read Abigail’s review of the Hunger Games books. Abigail is a lovely young woman, our former babysitter and pastor’s daughter. She does a great job articulating the themes of the book.

As far as my opinion of the movie? I thought it was appropriate for my 13 and older kids. Violence was kept off camera. Katniss and Peeta were very well cast. Damn and hell were each said perhaps twice, but there was no other swearing. The only “romance” was a couple of tame kisses between Peeta and Katniss.

Katniss isn’t your average strong, fearless woman lead. She’s a down-to-earth get-things-done kind of gal who is scared, but willing to do what needs to be done to protect her family. Peeta is a bit on the wimpy side (as he is in the books) but Gale is certainly a strong male character. Gale isn’t seen much in this movie, but will be more prominant in the sequals…and in case you’re wondering, I’m Team Gale 🙂

Having only read the books once (and not recently), I’m in no position to compare the movie adaptation to the books. I will say I enjoyed the movie, but am not in any particular hurry to see it again (though my kids are). Enoch (12) will be allowed to watch the movie when the DVD comes out this fall.

Anxiety Rears it’s Ugly Head: Why I Hate Teaching My Kids to Drive

Ten Years, Perspective, and the Cherry on Top

Hobo Carts and Other Real Life Tales of Trauma