The Worst Science Fair Project Ever 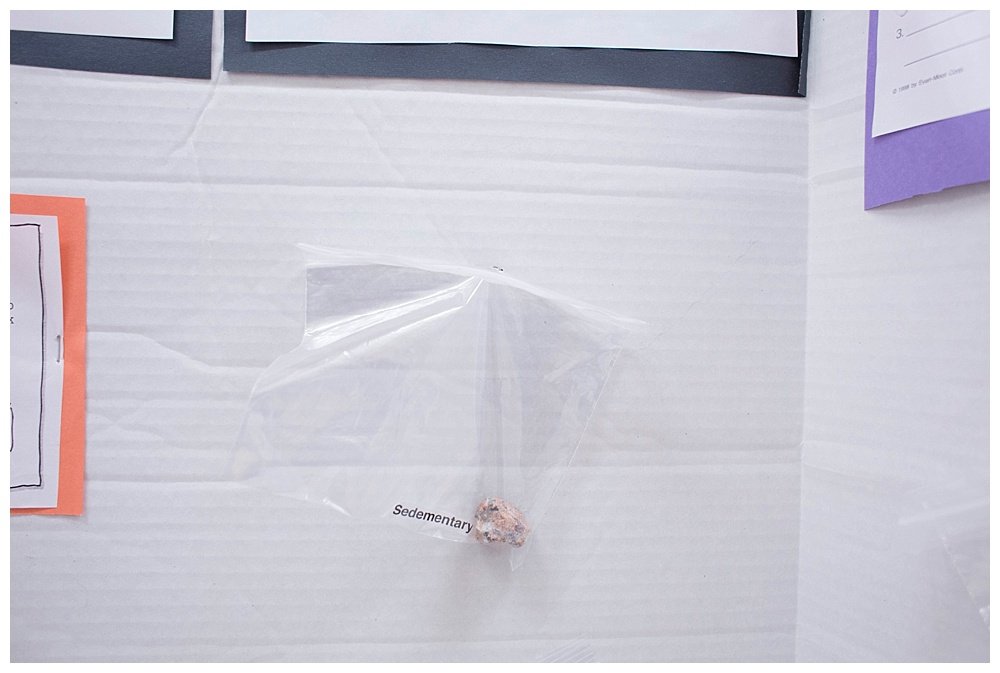 Hey, friends. Last night was our school science fair and guess what? I am the mom who helped her kid turn in the worst science fair project ever.

Now, I know exactly what you’re thinking. You are thinking, “It can’t be that bad Renee. You are exaggerating for the sake of humor and to brighten our day”. Except I’m not. And get this, not only did my kid turn in the worst science fair project ever, but I am on the Science Fair Committee…and PTO.

It all started a few months ago when it looked like there would be no science fair at all because no one was willing to take it on. My friend, Kayte volunteered to head it up and I volunteered to help her.

Tucker, ever competitive, decided to do a science fair project (of course) and so did Apollo. Despite the fact that last year Apollo decided to do a report about penguins and politely declined working on it every time I suggested it (I supplied to books, printables and reading ability).

Finally, on the last day, he said, “can you just do it for me?” To which I answered (so lovingly)…“um, no“. So he didn’t have a project to display…

Somehow, despite this experience, I took the bait when Apollo wanted to participate in the science fair again. While he still loves penguins, his current passion is rocks. “Perfect,” I thought. “He can do a report on rocks…we can identify the rocks from his collection…” We can do this.

This year was pretty much a repeat of last year. I ordered a book about rocks. I got books from the library. We looked at rocks.

And then it all fell apart.

Apollo had very little interest in actually doing anything.

So there we were, the night before the project was due, armed with only cardboard, some rocks, glue, and construction paper. Rome wasn’t built in a day, but surely a first-grade science project could be. 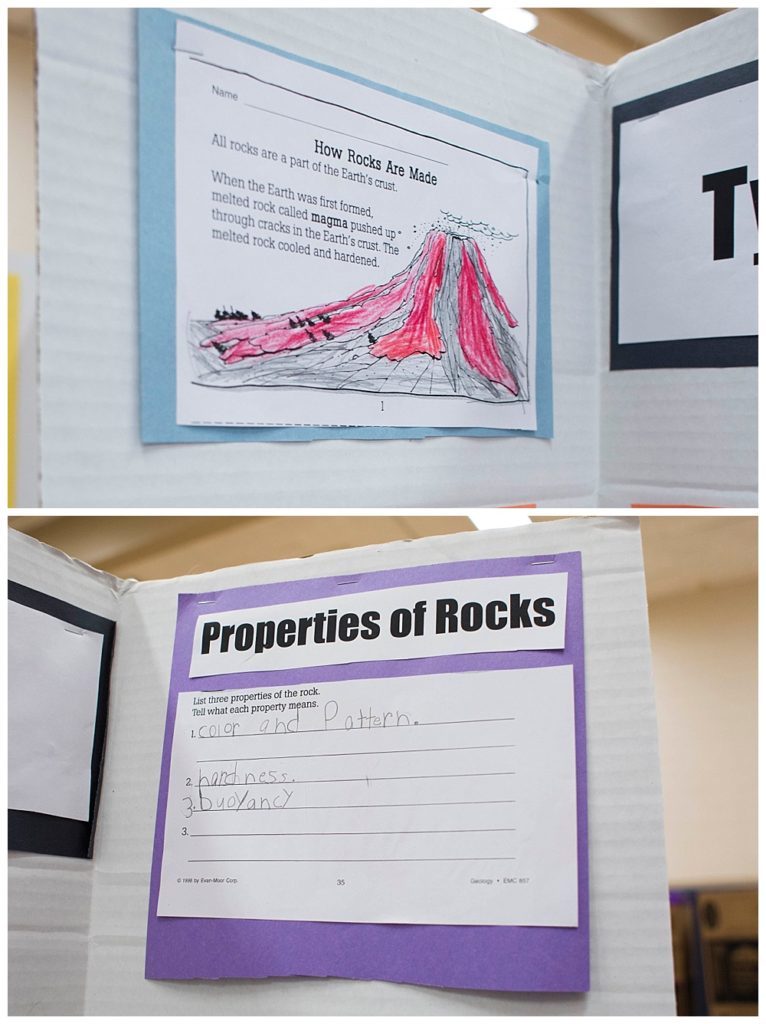 Please note the extent of work done by my charming son.

He colored one picture and wrote five words.

Let me just say it is a really good thing that Elmer’s Glue isn’t sponsoring this post because Elmer’s Glue will not adhere construction paper to cardboard and don’t believe anyone who says it will!!!

I needed to figure out something since it was an hour until bedtime…so I decided to staple the paper to the cardboard trifold.

I lay the trifold board on my dining room table, opened up the stapler, pounded a few times and smiled at my progress.

I went to pick up the trifold board to move it to a different position and it was stuck.

Yes, my friends, I stapled the dang poster board/science fair project/ implement of torture to our dining room table.

The table I inherited from my grandma.

And we weren’t even finished yet.

Next up was to “identify the rocks”. Simple, right? Since we had just learned so much about rocks.

And to make it easier, while Apollo has a vast collection of rocks he has collected from parks, our driveway and the school playground, he wanted to use the ones from the rock kit that came with a science kit years ago. Back when I was a cool homeschool mom.

This should have been an easy task since the kit came with an index and the rocks were numbered.

This is my house, so why in the world would I expect the index to actually be in the box?

No problem, we would just figure it out ourselves.

Um, friends, I’m not a geologist.

We made our best guesses and put them in bags with labels (hand cut by Apollo).

I stapled the bags to the board (not the table) and hoped for the best. 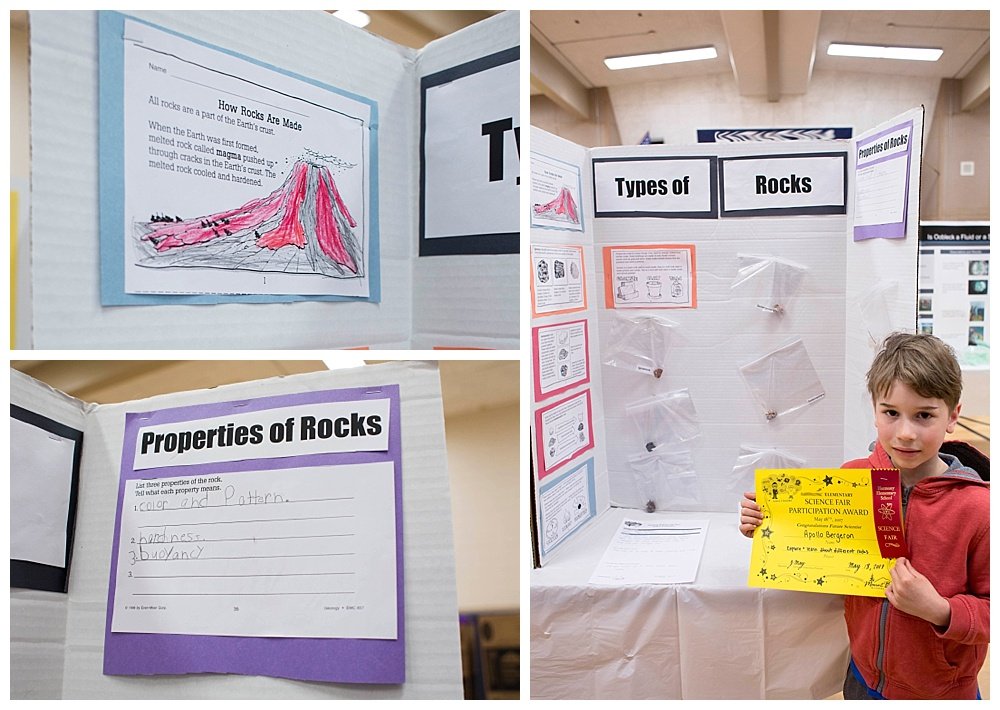 So we loaded up the fam and headed to the science fair last night.

Let’s just all be thankful that this wasn’t a competition.

While we (no doubt) mislabeled labeled rocks, stuck them in baggies and stapled them to a piece of cardboard, other kids showed off their Jacob’s Ladders and 3D  printers. 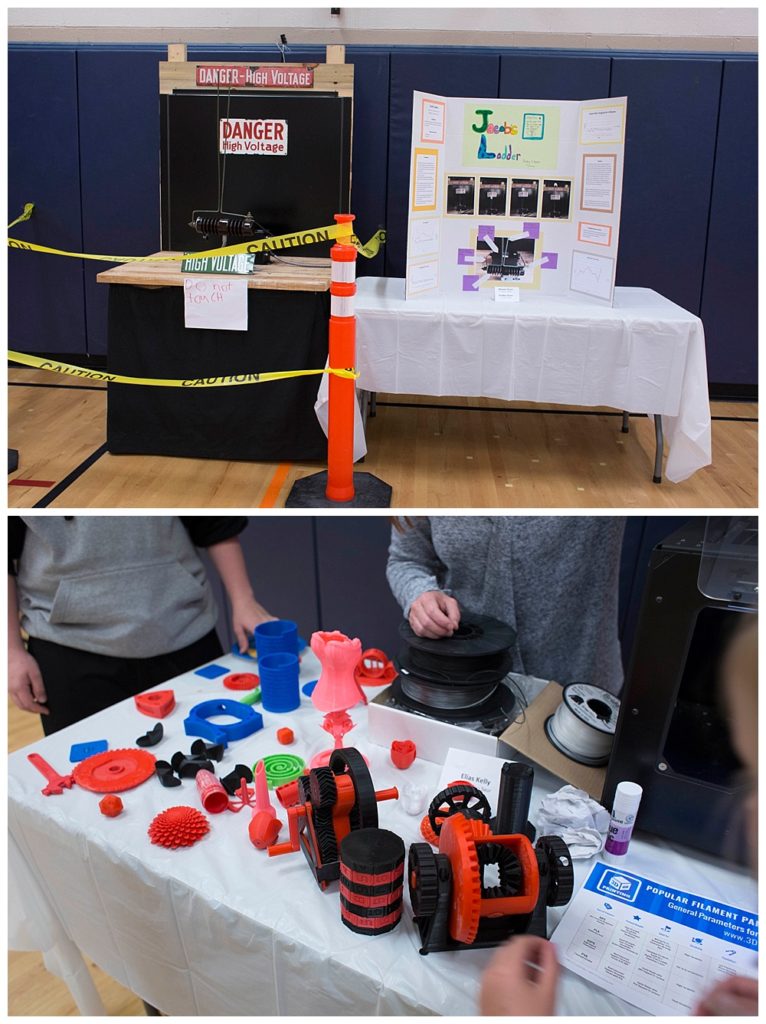 I am just happy to say that we obviously have the market cornered on terrible science fair projects.

I dare you to try to beat this one.

For a mom who homeschooled for 15 years and did amazing unit studies about Laura Ingalls and the Titanic, had my kids build an edible Norman Castle and did hands-on marine biology units I sure seem to suck now…

Do you have any Science Fair Project nightmares? Please share them in the comments!

{And for the record, Apollo doesn’t read the blog so he can’t be upset or offended by this. And when he is old enough to read it (and I’m smart enough to not encourage science fair projects) I can delete the post or enter the Witness Protection Program. Maybe both…}

The School Play and Pinewood Derby