An Anniversary to Remember

I love Mondays. You know I do. Yesterday, however, I was really wishing for a do over…but that’s not even where this sad tale of woe begins….Friday was mine and Chuck’s 21st wedding anniversary. How exciting! How romantic! How amazing!

I wasn’t going to share this on the blog, but it now seems pertinent to the story. Friday was our anniversary. Chuck and I often make  plans ahead, but this time we didn’t. He called me during the day and suggested we go out to dinner to celebrate. Perfect! Several hours later he called back again…to say he was really sick. His head felt weird, he couldn’t walk, was vomiting violently, was having trouble talking and needed to be  picked up from work. A coworker would drive him part way and we agreed to meet up in town….I pulled up to the appropriate destination to wait for Chuck….I waited and waited and waited, until another call came in saying the co-worker had taken Chuck directly to the hospital ER. To make a long story short, we spent the rest of the evening in the ER where they ran test after test (EKG, blood work, CT of his head and abdomen, x-rays) and could find nothing  “wrong”. They eventually diagnosed it as vertigo and sent him home with a couple of prescriptions.

{And by the way, I still made him buy me dinner…a late night stop at Panda Express for Orange Chicken!}

Chuck pretty much stayed in bed all day Saturday, reading and resting. On Sunday he was feeling better and headed to church with us..

Monday morning Mordecai and I left the house at 6:45 am for a visit to Children’s Biobehavioral Clinic. Doesn’t that sound like fun? He had a series of three appointments back to back, we had a break for lunch then one more appointment. All was well…Mordecai wrapped himself in a  blanket and slept the entire drive. 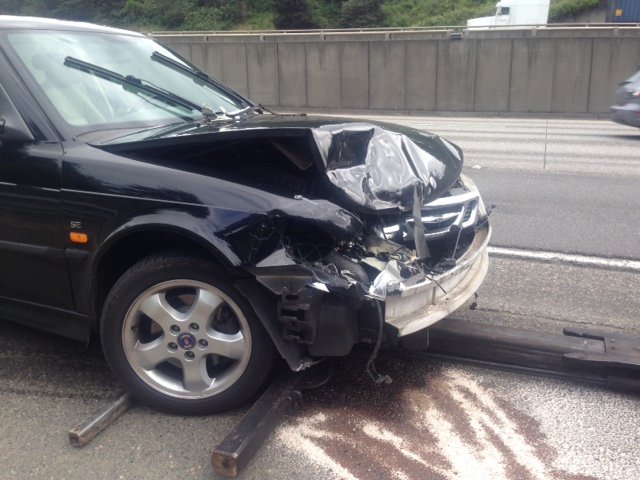 One exit away from mine, the car ahead of me slammed on their breaks because the car ahead of them slammed on their brakes. Unfortunately, I was unable to stop in time and slammed right into the other car. I was driving our small 2000 SAAB, not our big van. Mordecai woke up on impact and, in true Mordecai fashion, didn’t ask a single question. Not, what happened? Why are the police here? Are you in trouble? Will we still make it to my appointment? Nope, he sat there quietly as if it were perfectly routine to play bumper cars on the freeway on our way to early morning appointments.

After the police were called, I called Children’s to let them know I was only a few minutes away, but would likely be late (it was 8:45 and we had a 9 am appointment) because I was just involved in a crash. I was informed I needed to be there within 20 minutes or they would need to reschedule the appointment…Um…okay…but you can’t really hurry along the tow truck, the hand of justice or WA State Patrol.

Eventually the tow truck arrived and towed our car…I was able to sweet talk the driver into taking us to our appointment (thank you, Ben). We arrived 40 minutes late, but the appointments went on as scheduled.

During our lunch break, we walked to a nearby fine dining establishment…maybe you’ve heard of it? McDonald’s? I was voting for Qdoba, but I’m sucker for Mordecai’s big brown eyes. While at McDonald’s I finally contacted my dear friend Molly. You might remember her. From the infamous G-tube/Ingrown Toenail Disaster to Fish Puke, she’s always there to help with a smile. I adore Molly and her family…I just wish our relationship weren’t quite so one-sided.

One thing I have learned as Apollo’s mom is how to compartmentalize things. I crashed, I called the police, I called Children’s, I called Chuck.  I went to Mordecai’s appointments, I started hustling for a ride home. I ate lunch, I went to Molly’s. Chuck decided to rent a trailer so he could haul me, Mordecai and the car home in one fell swoop.

I told Chuck, look on the bright side, our anniversary weekend cost us nearly as much as a trip to New  Zeland…with no need to travel or find childcare! Never mind that we now need to find a new car…and after twenty-three years of driving I just received my first ticket ($168 for following the car ahead of me too closely)…

It has not been a good start to our week, my friends. I am so very thankful that Chuck is fine and that Mordecai and I were not injured in the accident.

P.S.: Don’t forget to leave  comment on yesterday’s post. I am giving away a $50 Snapfish gift certificate!