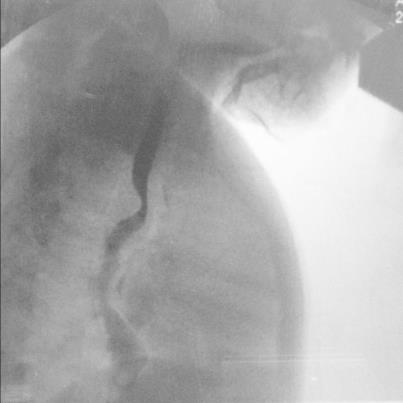 This, my friends, is an image from the Upper GI Apollo had done in April of this year. The black you see is his esophagus. The esophagus is where your food goes, and should hang straight down. This is what his esophagus looks like now, after his double aortic arch division.

This is why Apollo has struggled to eat from the day he was born. This is why he spent nine months (between the ages of 9 months to 18 months) hovering between the 0-1% on the growth charts. Why he didn’t creep above 3% until after his double aortic arch division in March. This is why he simply didn’t grow despite my spending the majority of the day breastfeeding and trying to get more and more solids into his mouth. Why he didn’t grow despite the “high fat diet” we had him on.

The Feeding Evaluation Got it All Wrong

It certainly makes one wonder about the feeding evaluation he done when he was 15 months old. The one where I was told he was just “afraid to eat”. It makes you wonder why, in those 27 visits to our primary doctor in his first two years of life, a swallow study or Upper GI wasn’t suggested before. It makes you wonder about his two dozen visits to the Children’s Hospital, when this apparently wasn’t noticed. It makes you wonder why the ENT never noticed a problem and said it was just “allergies and reflux”. I have been concerned about his difficulty eating since the day he was born. While there have been times that things seemed to be getting better, he clearly was never “cured”.

The thing is, we were told this would be fixed with his heart surgery. And I suppose 99% of the time it is. So nobody checked to make sure he was “fixed” post-surgery…According to the doctors, this is so rare, there was no reason to check. You’ve probably heard the saying, “when you hear hoofbeats you look for horses, not zebras”. Well in Apollo’s case, I think they better start looking for zebras. Every time. If there are odds to defy, he will do it. If there is something so unusual it’s not worth checking for, he probably has it.

Life with a Compressed Esophagus

So what does this mean for Apollo’s future? Here’s what I wrote back in April after returning home from the hospital:

As far as the CAT scan, it is indeed vessel from his funky aorta pushing against the esophagus.  Surgery to correct this is occasionally done on adults, but it is very risky and in Apollo’s case, the vessel would have to be moved to a less-than-ideal spot, which could lead it to kink. In short, there is nothing that can be done about it. The cardiologist said there are NO long-term studies on patients with these. With this misplaced vessel, Apollo just took his very rare heart defect, and made it ever more rare. The cardiologist did find one study, which showed most patients with this are doing very well at one year post-diagnosis.

Nothing has really changed between April and now, I just didn’t have the image before to show you. When I talked to Apollo’s cardiologist at the park on Monday, he gave me a slightly different story (he wasn’t at the hospital when Apollo was admitted, so we haven’t talked to him post CAT scan). He said this was likely “a residual left aortic arch”. He mentioned the possibility of surgery too, but we’re talking open heart surgery this time, a much riskier procedure and less of a chance of success. In fact, as far as I know, this procedure has only been done on adults. Our cardiologist is going to talk with a colleague in Chicago who he thinks may have more information.

Keep in mind, we are talking about a defect (double aortic arch) that comprises less than 1% of all heart defects. And this complication is even less common than that. In fact, so uncommon, I was told they’ve never even seen it at Seattle Children’s Hospital before.

So we are kind of in uncharted territory here. Chuck and are looking into getting a second opinion. We haven’t given up  hope yet.