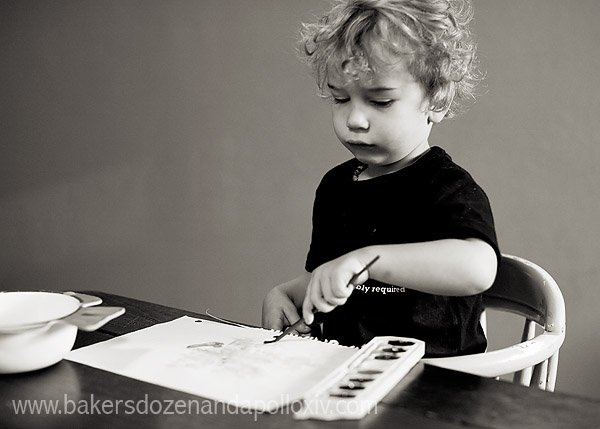 Sweet Apollo, painting with watercolors for the first time.

In bed this morning, Apollo wedged between us, I said to Chuck, “It’s been six months since Apollo’s heart surgery and four months since his g-tube was placed“.

Apollo immediately sat up and said, “No! You not say heart surgery. Heart surgery all done!”

It nearly broke my heart to hear him say that.

If all was well, his heart surgery would be “all done”. But as his medical records state in cold, unfeeling terms, Apollo has a “complex post-surgical anatomy and physiology” some of which the doctors don’t even understand.

September 11th, we return to Children’s to meet with Apollo’s cardiologist once again. That same day he also has a visit with his pulmonologist and will been seen in the PASS clinic (Pre-Anethesesia Surgical Service) in preparation for his new g-tube. 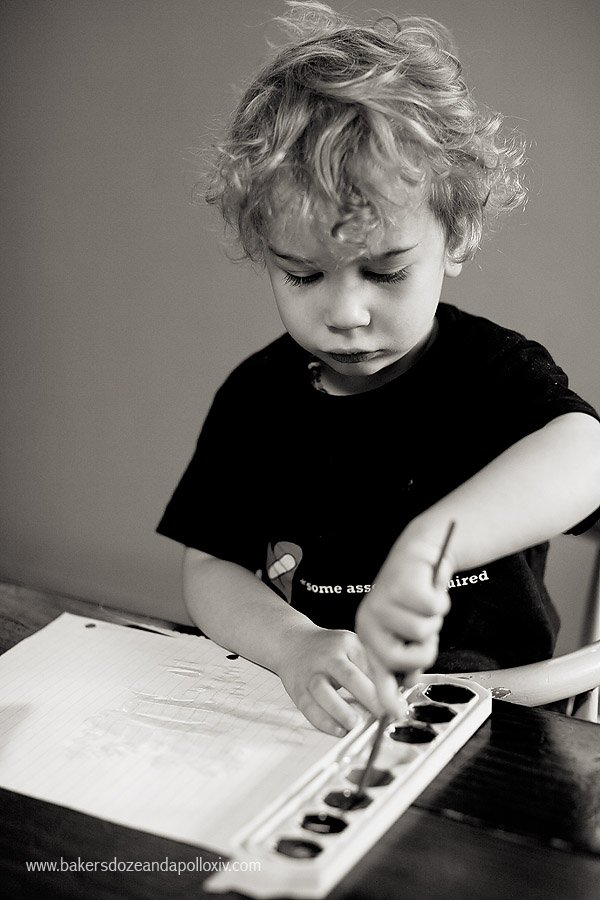 September 17th, he gets his smaller g-tube placed. I am dreading the procedure (which is done by endoscopy, not surgically). Apollo is old enough to remember having had surgery in the past. He knows not being fed or nursed in the morning before an appointment means surgery. He knows all about IV’s and hospital gowns and ID bracelets. He knows about the pain after waking up after surgery. Every procedure he’s had this year (with exception of the original MRI) has led to fever and trouble breathing afterwards.

On the other hand, I am looking forward to the smaller mic-key style g-tube. I’ll no longer have to worry about the tube being yanked on or ripped out. Apollo will no longer come toddling up saying, “My tube hanging out” looking for someone to fix it.

We also have some very special visitors from New Zealand scheduled to arrived, you guessed it: September 17th. Chuck and I will be in Seattle, so my parents will be here to greet our guests, along with a houseful of energetic children. If our post-surgery chaos doesn’t scare them away, I suppose nothing will.

On a positive note, Apollo’s life is so much better now with the g-tube. He is no longer hungry all the time. He knows what it is to be satisfied after a meal. He doesn’t need to stop eating because his esophagus is clogged up or he’s too tired to force anymore food past the compression.

He has many, many more moments of running and playing with gusto. He has to slow down frequently because he is short of breath, but he has the energy to play again.

He is also sleeping better than he ever has in his life. He now regularly sleeps until 2, 3 or 4 in the morning. That means a stretch of 4-6 hours. We are also beginning to be able to have him fall asleep in his bed again. It requires melatonin and someone lying with him, but it’s an improvement over six months ago.

{Edited to clarify that his upcoming procedure is done by endoscopy}