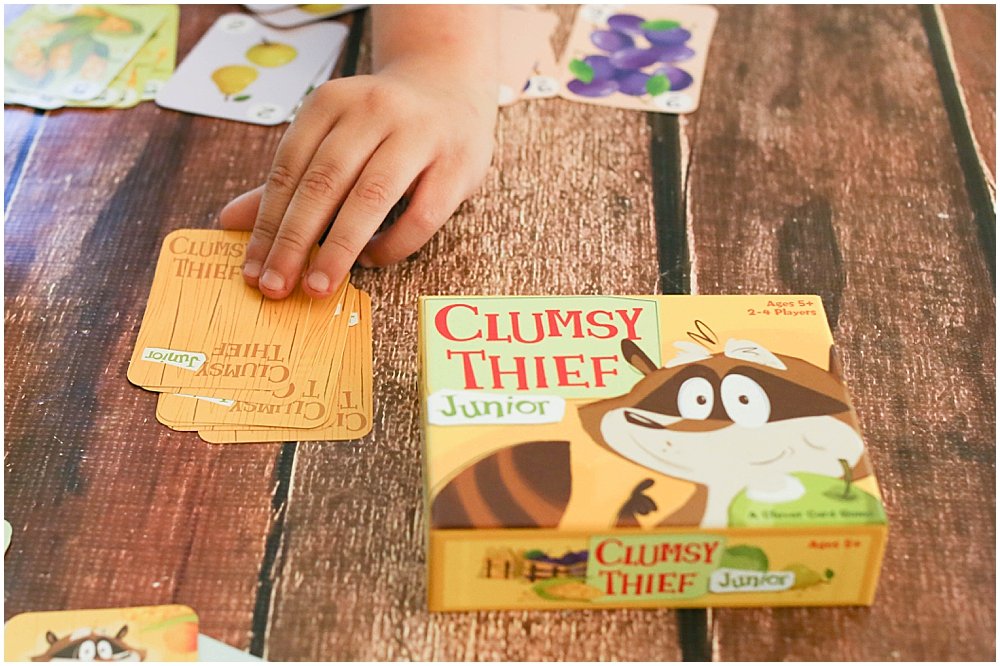 Clumsy Thief Junior is a fun and fast-paced card game that will have your kids learning and drilling their basic addition facts up to 10, without even realizing it.

This product was provided to me by Timberdoodle for review purposes. All opinions are my own.

Look, I’m going to be honest… I love games that promote learning but I hate games that feel like learning or, even worse, feel contrived. I spent too many of my school years playing “fun” games at math stations that were poorly disguised math problems. Games that felt something akin to your grandma trying to be “cool” and “groovy” to impress your friends. Because of this, I am really picky when it comes to learning games.

Thankfully, Clumsy Thief Junior is not that type of game at all. Initially, Apollo was annoyed that I had the Clumsy Thief Junior version since it says it is for ages 5+ on the box. But, between you and me, he needs a little sharpening of his math facts. Being a kid who struggles with anxiety means anything with time pressure (such as timed math pages) stresses him out. So this seemed like the perfect game to me.

How to Play Clumsy Thief Junior

The premise is very simple. Collect pairs of fruit that add up to the sum (or total) of 10. You lay down your pair in front of you…but your opponents can steal the pair from you by adding a number on top that brings the total of the previous card and the new card to 10.

The cards have the same number of fruit on them that corresponds with the digit on each card. As a bonus, the numbers that add up to ten have the same fruit (for instance, the 9 and 1 both have grapes on them). After just a couple of rounds of this game, Apollo was making pairs faster and faster.

The rules call for players, “After all possible stacks of 10 are placed on the table, players look at the remaining cards in their hand. When the dealer says, “GO!” players can take a card from their hand and place it on top of another player’s stack if the number on their card and the number on the top card of the stack add to exactly 10. Players then take the whole stack and place it in front of them“.

Once this is done, players grab more cards to bring their total up to five again and then start another round. Apollo and I have been making it a “free for all” once the first round is played. This means not waiting to take a turn, just making as many pairs of 10 as possible. This keeps the game moving and is so much fun. Apollo has been really enjoying the game and asked me to play it with him several times all on his own.

This game is perfect for kids working on their addition facts up to 10. The game uses both luck and strategy to win. The rules are easy to learn and you can be up and playing within 5 minutes. I recommend this game with no reservations.

This game is also included Timberdoodle’s Kindergarten Curriculum Kit or can be purchased separately.

How to Organize Your Digital Photos