Consistency is the Key!

Consistancy is the Key to Good Parenting! 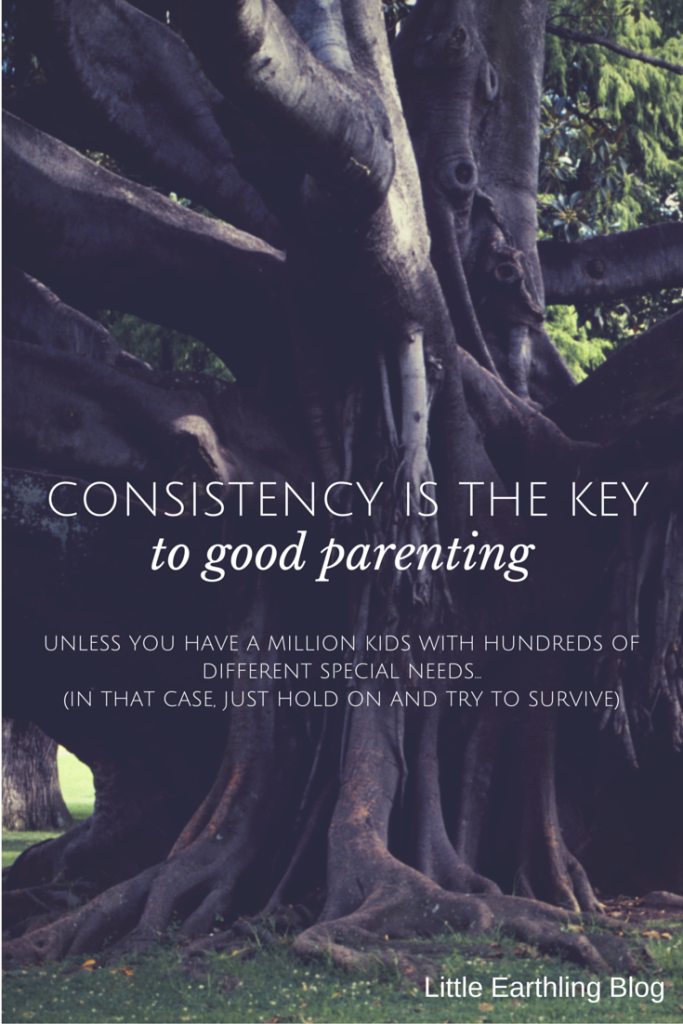 Consistency is the key to good parenting, am I right? Set limits, and keep your children within them. Have clearly defined rules, and enforce them. Encourage the good behavior and discourage the negative. It’s all rather simple, isn’t it? It is the way we parented for well over a decade. Everyone went to bed at the same time and everyone ate the same meals. Those days are long gone, replaced with (it often seems) a different set of rules for each child. Then we added children with special needs, which makes consistency (in the traditional sense) impossible.

And it isn’t easy.

Back in the day, when we had ten under ten, people used to ask how I did it. My simple answer was: bedtime. Much like my friends who relax with a glass of wine in the evening, I knew if I could make it to eight-oh-five, I could chill. Read a book in peace. Pee without an audience. Maybe even have a snack. Now we have kids ranging in age from four to seventeen. Heck, I go to bed before some of my teens most nights. And Apollo, who will be five next month, is just now going to bed in his own bed (with a sibling) at bedtime. And it only cost us this Ninjago Anacondrai Crusher…and  years of hard work.

We absolutely unapologetically trained our children to eat what was put in front of them. It took patience, work, and consistency, but we did it! In fact, I wrote a blog post about it, way back in 2007. Long before the terms: failure to thrive, g-tube and double aortic arch were part of my vocabulary. Now, of course, we’ve never been able to do that with Apollo. We are still just happy when he puts food in his mouth. Well, our son with autism thinks if Apollo doesn’t have to eat dinner, he shouldn’t have to either…And Avi, while she would never skip a meal, doesn’t think it’s fair that Apollo gets to eat whatever he wants…

Well, these need to be nipped in the bud, no question about it. After twelve years of nipping, we haven’t made an ounce of progress in our son with autism’s rages. Nope. Chair throwing, screaming, kicking, wall punching, we have it all. And more. Okay, so we haven’t managed to get rid of his rages. The problem is he has younger siblings who look to him as a role model, Apollo in particular. Recently he has tried out a few autism-like rages and it hasn’t been pretty. Apollo’s, we will nip in the bud; our son with autism’s we just try to survive.

Limiting media and screen time has been a foundation of our parenting philosophy. Unless you: are recovering from heart surgery, being tube fed six hours a day, dealing with chronic fatigue, etc. Apollo has had more screen time than all of our other children combined. He has also logged hours and days and nights in the hospital with limited mobility. You can only read books, play with play dough and play peek-a-boo so many hours a day. The kicker comes in with Apollo watching a movie…he can’t watch them alone, yet I don’t want my other kids to be watching movie after movie….do I choose one child to watch with him? Or throw caution to the wind and let them all rot their brains together?

These days life is complicated. I can’t have one set of rules for everyone. Most of my kids understand this and are okay with it. Our kids with special needs, however, have very inflexible thinking. They can’t understand why the rules are different. Our son’s FASD makes him very dependent on routine, structure and the same thing day after day after day…if we break that routine once as a “treat” it throws him off completely. The “treat” becomes the new norm in his mind, and he is angry when it doesn’t happen. Avi, with her attachment issues, can’t stand to see grace extended to anyone else…and Apollo? He’s only four, and it is confusing to him as well. Especially when he sees his older siblings act in unusual ways…

So each day is a new experience, a new challenge. I’ll tell you one thing, it sure makes me flexible in my thinking…and sends me to my knees in prayer.