I finally put all of the photos from my phone onto my computer. Brace yourself for another huge photo dump of our trip to Houston. There are so many thoughts and feelings and stories still swirling around in my head about our trip…some will spill out here others will continue to float around, waiting for a place to land.

The Ronald McDonald House will always have a special place in our hearts. Not only did we only pay $25 a night to stay and had many, many meals provided, but it added some sense of normalcy to our life in Houston. It was so much nicer for Apollo to have a playroom, playground and other children that being cooped up in a hotel room day after day. The Houston RMH house is large, and local businesses and groups provided activities almost every night. Chuck and I are now in the habit of dropping in our spare change every time we see a donation box for them.

We had a week between arriving in Houston and the actual surgery. Between appointments we filled our days touring the local sites such as the Houston Zoo…

…visiting the beautiful beaches in Galveston…

and, of course, NASA!  This is Apollo XIV posting in front of the actual Apollo 17 Command Module! This was the last module to land on the moon.

Dr. M does a re-operation on Apollo’s double aortic arch. Dr. M told us this was his “sixth or seventh” re-operation. He not only removed the diverticulum compressing Apollo’s esophagus and removed more bands of vascular tissue but he also repaired his left subclavian artery! All in one fell swoop. We will be forever grateful to Dr. M. A thank you seems so inadequate… 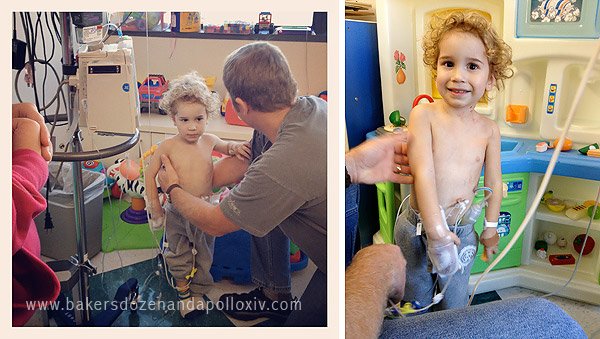 Three days after surgery, with help of two great physical therapists, Apollo stood up for the first time. He cried and cried as we forced him to walk to the playroom. Walking is necessary after this type of surgery to clear fluid out of the lungs but is tortuously painful. Yes, he looks might proud to be standing on his own…he also has a particular ” wild-eyed gleam” in his eyes that he always got from morphine…

We must have made hundreds of laps around the 15th floor…

Apollo had surgery Tuesday morning and Chuck headed home Saturday afternoon…I was more than a bit nervous about him leaving, but we survived.

You can see Apollo’s fluid filled bulb in the picture on the left. At it’s worst, this bulb had to be emptied every couple of hours as he constantly drained fluid from his chest. The tube was as wide as a milkshake straw and held in his chest with stitches. His daily dressing change was horribly painful.

And Tilly…what would I ever have done without her? Chuck left four days after surgery and I really needed the extra hands. Thank you, Tilly. I hope you have some happy memories of our time in Houston. 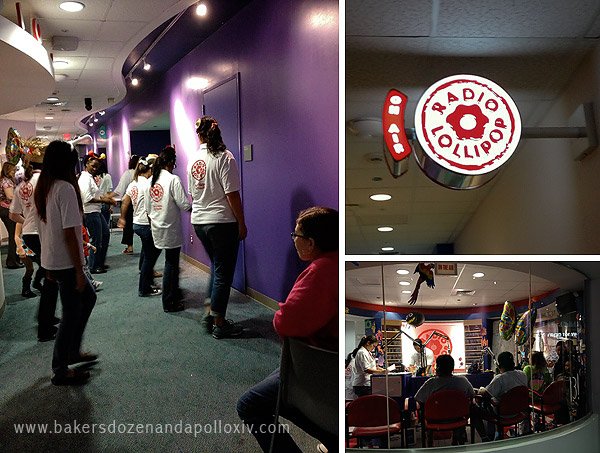 One day during our long stay, Apollo was declared well enough to “go  up to the sixteenth floor”. On  the sixteenth floor were: a library, laundry room, and Radio Lollipop, Texas Children’s Hospital’s in-house radio station. A few nights a week from 6:30-8:30 the station went live. The kids were able to participate, request songs and talk on the radio. The game room was opened and each night ended with a dance session.

Apollo had no idea what he was doing, but it was sure a nice change of scenery from the 15th floor… 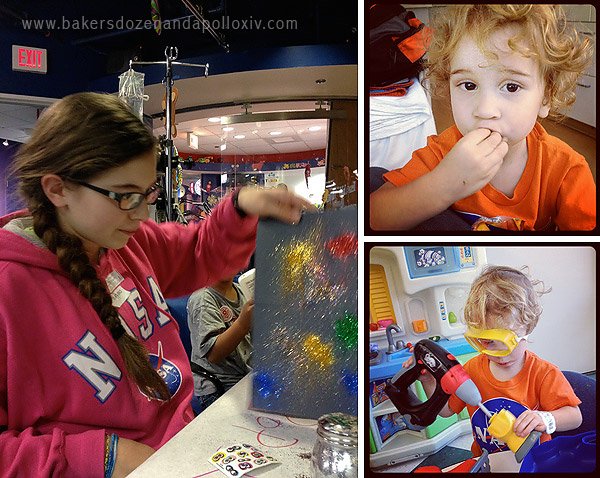 I wanted to cry the moment we walked back in the doors of the Ronald McDonald House. We had survived heart surgery and ten days in the hospital. Chuck had gone home. I had to leave the hospital, walk across the street and pick up Apollo’s prescriptions before he could be released. Apollo was discharged at 4:30 pm and the last shuttle to the RMH left at five. It was a stressful half hour of packing up the entire room, hauling all of our belongings, cars seat,  and sick son down to meet the shuttle bus in time. It was the first time I had been outside in ten days. 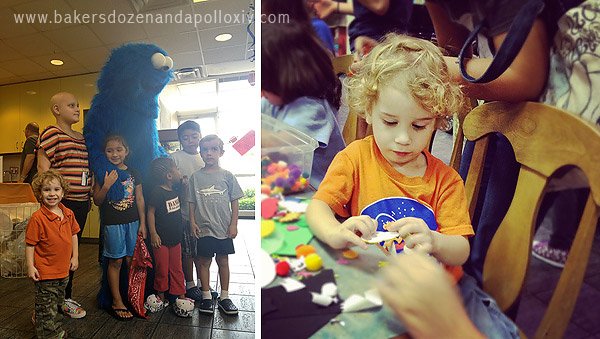 We were back to our home-away-from-home in Houston and it felt good. Back to the familiar faces of the other families all facing challenges they never dreamed of.

We had some awesome blog readers track us down and bring us delicious homemade soup and bread. And a gift bag filled with all the necessities: coffee, chocolate (my favorite type even), yarn, knitting needles and duct tape. By the way, this beautiful mama is naming her new baby Enoch…she has great taste, don’t you think?

Back at the RMH we adjusted to Apollo’s new fat-free diet and frequent vomiting. And when a DJ came and played the Cupid Shuffle, Apollo dragged me to the dance floor to dance it with him since we’d learned it at Radio Lollipop.

We stayed at the RMH for a week after Apollo was released from the hospital. We made friends and met people I’ll never forget. KJ, Jacob and Hamsa with brain tumors. Katie, age 5, waiting for a heart transplant. Teens with cancer and one recovering from a lung transplant. I met two women who had fetal surgery…one lost a twin in the process and awaits the birth of her other baby who is expected to have heart issues. So much pain and suffering. If I learned anything from my stay at the RMH it was that suffering and disease are no respecter of persons. Rich, poor, young old…it can creep in any time and affect anyone. 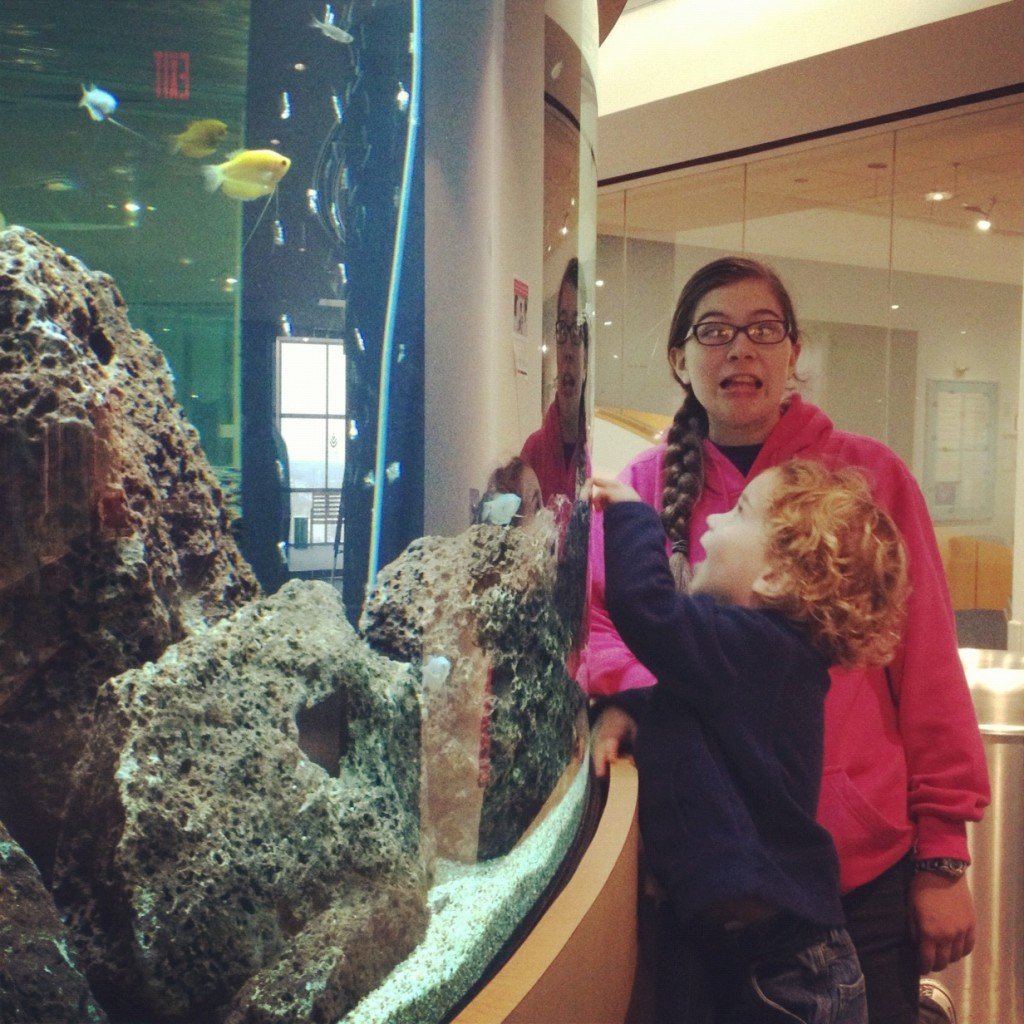 Our last (ever?) visit to Texas Children’s Hospital. 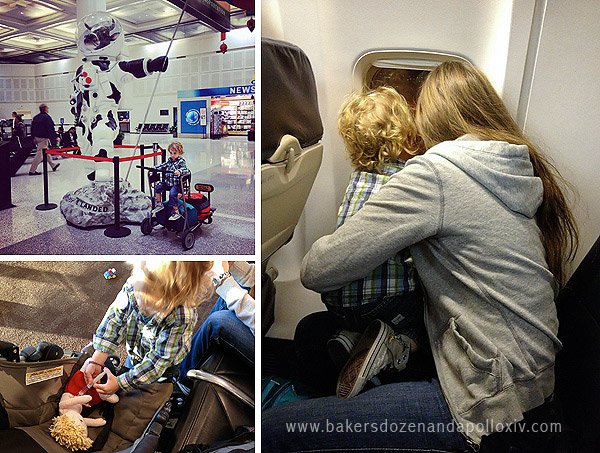 And finally, three weeks and two days after leaving, we found ourselves heading home. And I found myself missing my newfound friends at the RMH.

{By the way, I meant to mention this yesterday and forgot. I received an email this week from Apollo’s pulmonologist who was checking in to see whether or not we had sought further treatment for Apollo and how he was doing. This is a man with hundreds of patients spread over several states…and he emails to check in on Apollo! Yes, you could say he’s on of our favorites at Seattle Children’s Hospital.}