Love on a Mission

If you are new here be sure and check out Love on a Mission page and get caught up!

“The plane began it’s decent and the stewardess collected my coffee…I felt the plane shudder as the landing gear came down. I could see the lights illuminating the city below. It was game time.”

As the plane landed I was overcome by the terror that Chuck wouldn’t recognize me. After all, I had barely recognized him when he flew to Alaska three months previous. My worries proved unfounded. I had barely set foot in the airport when Chuck swept me into his arms and gave me a kiss that could have melted polar ice caps. In fact, that kiss may be responsible for global warming. I’m sorry.

I had flown into the Seatac airport but we were heading south to the Evergreen State College, home of the hippies. One of my high school friends was attending and we were planning to pop in and visit her. I was well prepared, wearing my Birkenstocks, wool socks, corduroy pants, long sleeve shirt with a hand embroidered vest over top, accented by a monkey tooth necklace I had picked up in Brazil. Chuck was wearing a rugby shirt, tucked neatly into Levis and a pair of Nike tennis shoes.

The visit was fabulous. I had my hot, soft-spoken foreign fiance’ and loved walking around campus, soaking in life at a university with no grades and plenty of independent study. I wasn’t jealous, though. After all, I was getting married and heading to HAWAII. Its kind of hard to beat that.

After our visit we headed north to British Columbia. It sounded so regal, so cool. So British.

I was completely welcomed into Chuck’s family. His mom had prepared a room for me complete with a soft bed and down comforter. I slept soundly all night long and was awakened by the sunshine and crowing roosters. Chuck poached farm fresh eggs and fixed toast for breakfast. We were living large.

I only had five days to spend with Chuck. In that time we planned to: meet the whole family, smooch, attend the official engagement party Chuck’s mom had planned, meet with a pastor for premarital counseling…but first off was getting our engagement pictures done. When I first suggested this, I envisioned going to a Sear’s Portrait Studio and getting a few shots done. When I suggested it to Chuck, he said sure! And promptly hired an expensive custom photographer to do formal portraits. On the appointed day we drove to a park in Vancouver to meet the photographer. I was wearing a dress, tights and little flats. Chuck wore slacks, a white shirt and tie. We posed next to a tree. We posed under a tree. We posed in the park. And then the photographer suggested we wade out into the creek (did I mention this was March? As in, winter) and sit on a rock. A slippery, wet rock covered in Green Creek Slime. Now, I am not squeamish. I’m not afraid of bugs or snakes or hard work or heights. But I am cold, pretty much all the time. Standing in a creek, in the winter in a dress and tights made me even colder. Even before I sat on a wet rock covered in Cold Green Creek Slime.

The photographer was nice enough to provide a towel for me to sit on. A small hand towel. So we waded and slipped and smile and posed. 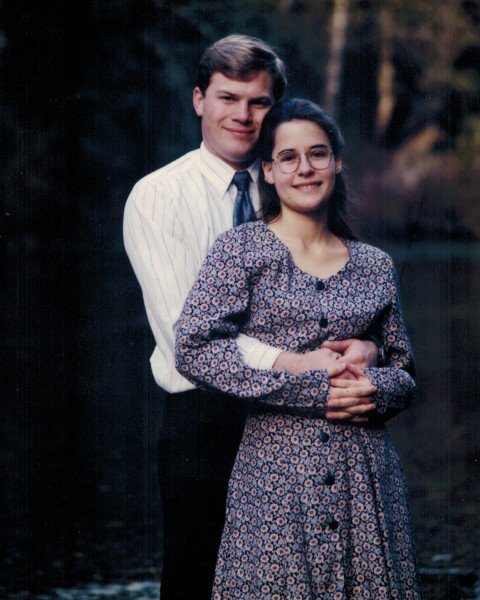 At dinner that night, my future mother-in-law provided a Hungarian feast made up of foods I had never heard of: pirogues, paprika chicken, nokedli cabbage rolls and cabbage and noodles.

Of course, since I was vegetarian, half the dishes were off-limits right off the bat. The cabbage and noodles? Now that was the perfect dish for a vegetarian!

Cabbage and noodles. I’d never heard of “cabbage and noodles” as a dish. I eyed the humongous dish right in front of me. Cabbage and noodles were glistening with oil as steam rose off of them in wafting streams. It looked, to my untrained eye, utterly revolting. Slimy, oily, over-cooked cabbage and noodles. Chuck professed this one of his favorite foods. How, oh how was I going to consume this Special Dish, this Family Favorite and still smile (not to mention not gag?) Faced with the formidable task ahead, I let out a (quiet) sigh of determination and took a modest serving. The things we do for love.

Smiling at the friendly faces around me, I took the first bite.

It was…delicious! While the cabbage and noodles did glisten, they didn’t taste oily at all. The mingling of such simple flavors (cabbage, noodles, salt and pepper) blended together in a marriage of vegetable and pasta perfection.

The week flew by. We made trips to Vancouver and Dairy Queen and drove an hour so Chuck could get a haircut by his favorite barber. We took long (cold) walks. We kissed in the cab of Chuck’s ridiculously big truck (with Super Swamper tires. I kid you not). We met with a pastor several times to go over the pre-marital counseling material.

At our engagement party I met every family member and friend that Chuck had ever had. Okay, maybe not, but it seemed like it at the time. Chuck and I were impressed by a guest who proudly held up her fat, sumo-like baby and said, “Nine months old and completely breastfed!” Chuck and I exchanged grins. That would be me with our babies one day.

Our parting at the airport was emotional. We clung to each other like Rose and Jack in Titanic. We were heartbroken. We were in love. We wouldn’t see each other again until right before the wedding. We kissed. A lot.

My flight was called and I had no choice but to board. I sat in my seat and pulled out my book. Chuck’s mom had sent me home with homemade brownies and chocolate cake. I planned to indulge on the plane while I sipped coffee; to drown my angst in a deluge of chocolate, sugar and caffeine. The flight took off uneventfully and just as the stewards began coming down the aisle with trays of coffee and tea an announcement came over the loudspeaker. My head jerked up and I looked around as I tried to make sense of what I had just heard.

“Excuse me, but I have a message for passenger Renee”.

Love on a Mission Part 15: How I Met and Married My Husband