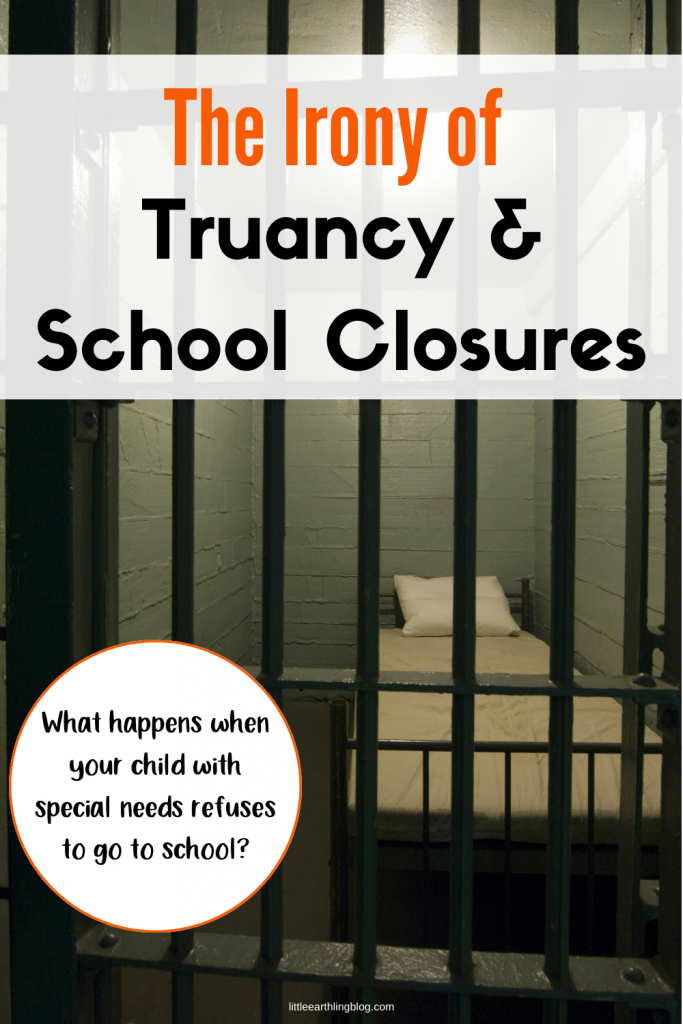 Autism and School Attendance: The Struggle is Real

School attendance has been a struggle for my son with autism for the past few years. High school has been a nightmare. He has gone through periods where he was attending less than five percent of the time. At his best, he has attended 75% of the time.

We have tried everything to get him to attend, trust me. We have had numerous IEP meetings (requested by me) to discuss his attendance. His IEP states that he will “attend as he is able”. He has written documentation from doctors, therapists, and hospitals, explaining that his high level of anxiety affects his school attendance. After receiving the Scary Letters in the mail we were reassured time after time (by teachers and administrators) not to worry about the letters.

“We have to send those out. We know your son’s situation. We know you are doing everything you can”.

Imagine my surprise when I received a thick manila envelope in the mail from the Juvenile Justice System. It was a pile of court documents informing me my son was being referred to the truancy court. If I don’t show up at a community truancy board meeting and come to an agreement, he will have to appear in court.

Apparently, my husband and I have shown due diligence, so it is all on my son now. My son who has 1) severe autism 2) a Fetal Alcohol Spectrum Disorder and 3) is considered legally disabled by the state.

The purpose of going through the Juvenile Court System? So the judge can order him to attend school. Please refer to 1, 2, and 3 and you will have a good idea about whether or not my son will understand the implications of a court order.

Give Me a Call, Please

I also pointed out:

1) this has been an issue for three years and he has never been referred to the courts before.

I was told that the state is getting stricter, and they were now sending out referrals for kids who they had previously chosen not to refer. Basically, they said, their hands were tied. And, by the way, they said, this could have been avoided if I simply called the school every day to excuse his absences.

“So, I should call every morning and say he still has autism and he won’t be at school today?”

Apparently, the answer to that is yes

And, let me point out, the school could save the district and our courts a whole lot of money by simply calling or sending an email saying, “Hey, the state is tightening down on truancy, and we need you to start excusing each absence or we’ll have to refer him to truancy court”.

But no one did.

An IEP is a Legal Document…Until it Isn’t

One of the first things you learn about IEPs is that an IEP is a legal document. It is a contract between you and the school and it has to be followed.

Except when it isn’t (an issue we’ve had more than once).

And, except, when another law supersedes that one. When I pointed that his IEP has “he will attend school as he is able” and one of his IEP goals is ““By 10/2019 [my son] will improve from being able to attend school 5.8% of the time to 25% of the time”. Guess what, my friends? He got his attendance up to 55%!

Too bad none of that matters when it comes to truancy. He is still truant, even though it is clearly stated in his IEP that he will attend as able and that one of his goals is to increase attendance.

So, basically, my son is being told, “Hey, we see you increased your attendance from 5% to 55%. But that’s not good enough. You are now being referred to the courts for truancy.”

I then pointed out that his IEP from 2018-2019 says, “he will receive tutoring at home Tuesday-Thursday for 90 minutes each day”. And we never changed from a partial in-home placement to full-time school placement. I was told the newer IEP made the older one null.

“But don’t we need prior written notice for a change of placement? Like we did to start the home-based learning?”

“Technically, yes,” I was told.

But that was never done. And the school still referred him to the truancy board.

The Community Truancy Board is on Hold…Indefinitely

The crazy irony of the situation? The day of this meeting was the same day our governor shut down schools for six weeks. He has since closed them down for the rest of the school year. Because of the “Stay Home Stay Safe” order, my son’s community truancy board meeting has been put on hold, indefinitely. But, eventually, the meeting must be held since court documents have already been filed.

To recap: we must attend a community truancy board to explain why our son hasn’t attended school regularly. But there currently is no school and we can’t meet because of the State Home Stay Safe order.

Hey, Renee, why don’t you just take a chill pill? Jump through the hoops. It’s just a formality.

But is it just a formality? When my son’s name is now in the juvenile court system? Yes, the court appearance is stayed in lieu of a community truancy board, but his name is still there. My son is already squarely in the at-risk category. He has special needs. He has mental health issues. He is African-American. And now, his name is in the court system for reasons he doesn’t understand.

Unfortunately, the state doesn’t make exceptions for kids like my son with autism.

There needs to be a change at the legislative level to separate truancy from special needs. But for now, we are struggling to adjust to distance learning (spoiler alert, it’s not working). And waiting for the restrictions to lift can come to an agreement with the community truancy board.

And we have no idea when that will be.

How to Get Your Kids to Eat Anything