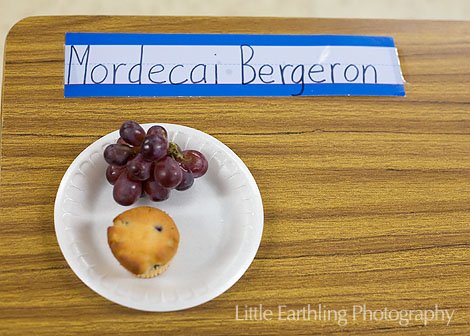 I don't quite know if I'm cut out to be a "school" mom. I feel like I'm always three steps behind and never quite know what's happening. Yesterday Mordecai's school hosted a Books and Breakfast event. The idea was to show up and enjoy breakfast and read books with your child. No problem. Where the confusion came in was that the flier said the event was from 9-10 am…okay…but Mordecai doesn't get on the bus until 8:50. So was I supposed to send him on the bus, then rush off to the school the second it left? I sent a note to his teacher asking about it and the response was: "You can bring him or have him ride the bus. He gets here at 9:15, so if you want you can just meet him here". Maybe I'm a bit dim witted, but it didn't make a whole lot of sense to send my son on a bus at 8:50, immediately drive to the school so I could be there by 9, then wait for him to show up at 9:15…so I drove him to school, along with a small sampling of brothers (siblings were invited). 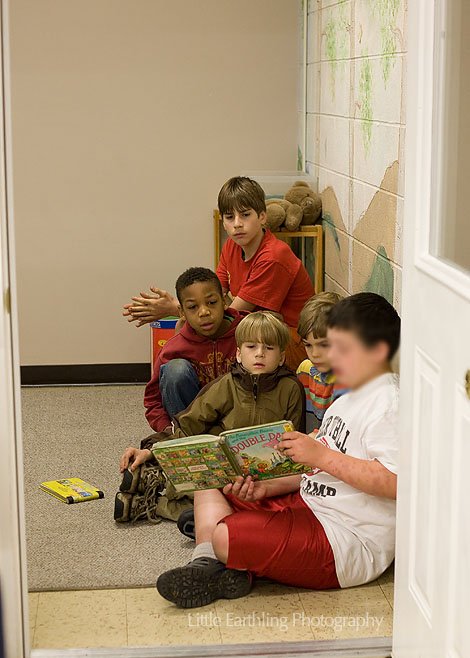 At any rate, I like his school. It is small enough that you could know everyone by sight and has a small town community feel to it. I was able to chat with the mom of a boy in Mordecai's class who, it turns out, I met back in my La Leche League days. That would have been more than ten years ago! Small world. This mom asked if Mordecai was autistic. I immediately realized it was because she was trying to figure out why he is in the Intensive Learning class…out of seven kids he is the only one who's disabilities aren't outwardly visible. 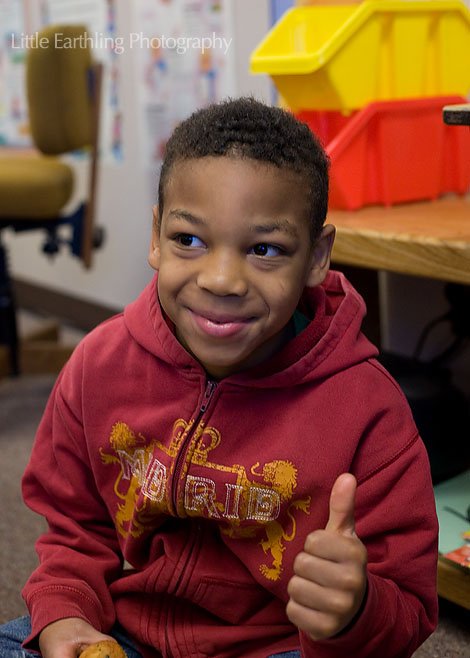 Poor Mordecai apparenlty did realize yesterday was a school day, because once we were done with breakfast and reading, he had his coat and backpack on and was ready to leave. Poor guy. He was in for a shock when I told him it was a school day and he was staying.

And speaking of school…have I ever told you my children are hilarious? And I love them immensely and pretty much think being a stay-at-home homeschool mom is the best thing ever? As part of our parent partnership program, my children have to answer an email survey every week to keep up with their supervisor. The older kids do this entirely themselves and I either type for the younger ones or have an older sibling help…because of this my children's answers are sometimes a suprise to me when I recieve the response from their superisor. Check out this sampling from this week's questions:

This was from seven year old Hezekiah's survey:

Think of a problem you have learned about in social studies lately and an action that was taken to solve that problem. Do you think the problem was solved in a good way or could there have been a better solution? Please explain.

Pretend that you are a scientist who has recently made a discovery. What did you discover? How will you let the world know about your discovery?

I discovered a cure to the black plague, I will test it and release it.

Give an example of something you learned about in science that has surprised you.

That you have to squeeze so hard to get the milk from the goat's teats.

{Don't forget to vote! I've just barely been in the lead for the last two days! Voting ends October 3} 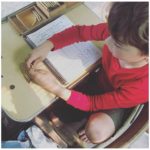