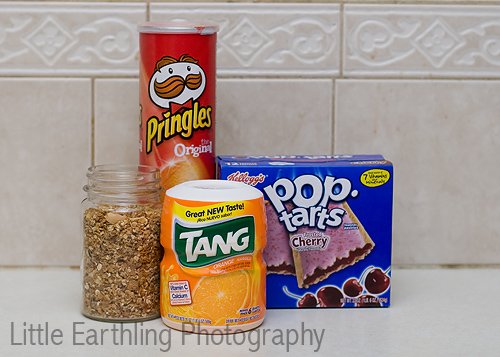 So what do all these things have in common?  They were introduced (or gained popularity) in this country in the sixties. This was our "kickoff breakfast" for our Sixties unit study. Yes, we actually ate that food and called it our morning meal.

The idea of a Sixties unit study began with Tilly who started begging for a "Beatles Party". I made her write a proposal for it, considered it, then decided to broaden the idea a bit and host a sixties party. The trouble is, I don't know all that much about the sixties…In doing some research online I found an excellent unit study. We have just started and we have learned so much already! Our study will culminate in, what else, but a Sixties Party. But for now, we're just having fun learning.

* Tang was actually introduced in 1959, but sold very poorly…UNTIL 1965 when the Gemini astronauts took it aboard their space flights to cover up the nasty taste of their filtered water. Suddenly Tang was a household name and everyone was drinking it! {Have a Blast, Drink Tang}

* Pop-tarts originally had no frosting and promoted their "real fruit preserve filling". {Eat it now or eat it later, no need to refridgerate!}

*Pringles were advertised in their commercials as "the newfangled chip".

*And to balance out all of that nasty stuff, some homemade granola. We can thank the hippies and back-to-nature groups for this delicious breakfast mix.  While they didn't "invent" granola, they made it a household name. 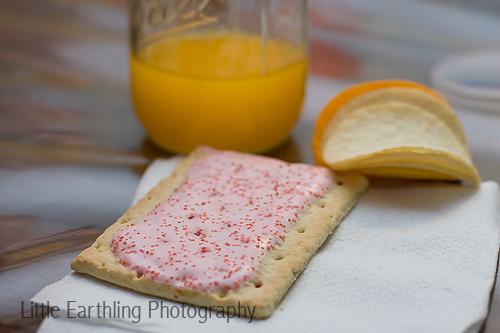 We spent part of yesterday morning watching 60's era commercials about the products above. It was interesting to see how Tang and Pop-tarts were touted as healthy.

Our breakfast discussions centered around topics like how much fat was actually in those Pringles. Adalia pointed out that eating one serving of Pringles used as many calories as she burns walking 1.5 miles (her new ipod has a  handy pedometer). Adalia was also disappointed to see that the Pop-tarts looked much better in the photo on the box than in real  life.

We had a great discussion about making healthy food choices and why we don't actually eat Pop-tarts or drink Tang. It has been difficult to teach my Liberian children about food choices. Where they grew up, a "healthy food choice" was eating food when it was available. And as much food as you could hold. They didn't exactly have packaged foods or frozen dinners available, so all these things here in America seem like great inventions to them.

{And no discussion about Pop-tarts would be complete without the "Pop-tart Story"…I didn't grow up eating these. I had them on occasion at friends' houses. I have purchased them exactly once before this study. It was over ten years ago. I was pregnant with Enoch and suffering terribly from morning sickness. I decided one day that a Pop-tart might just cure me…I popped it in the toaster and waited. As I took it out of the  toaster some of the fruit filling got on the palm of my hand. I yelped and tried to wipe it off, but it wouldn't come off! It had gotten so hot it melded itself to my hand. I finally peeled it off after it had sat their burning my hand for far too long. By the time the filling was off and I could run my hand under cold water, I had a second degree burn. I was in so much pain I iced it and soaked it in cool water for eight hours until Chuck came home from  work and put burn cream on it from his first aid kit (which had been in his work truck). He then bandaged the entire hand. To make matters worse, the very next night he had a company work party and of course everyone asked what happened to my hand. I had to admit I had burned it on a Pop-tart…}