Ways to Know Your Life is Completely Legit

In a lot of ways I am an old-school parent. While I am loving and nurturing, I don’t try to be my children’s friend. I’m not terribly concerned about whether they like me or not.  By that standard, I suppose I am winning at parenting when I am being mean mom. Am I right? 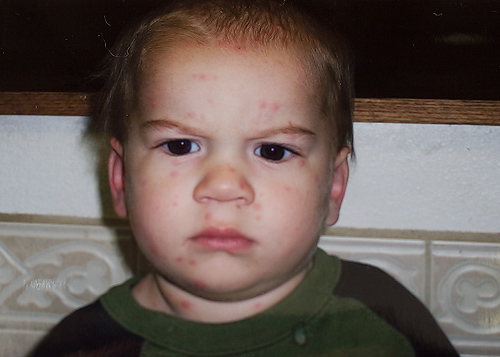 Hezekiah, about 10 months old, sporting a full-blown case of the pox.

Recently a child of mine, who was too young to be in on the Chicken Pox Plague of 2005, lay at my feet whining, moaning and groaning because I “didn’t let” her get chicken pox. Not only was said child not born yet during the Chicken Pox Plague (in which 8 out of 8 little earthlings came down with a full case) but I had the gall to get her vaccinated against future chicken pox. Now she will never get them. And she’s devastated. Not only that, she’s going to get them when she is an adult and die. So says my poor child who I never “allowed” to get the chicken pox. Sometimes life just isn’t fair.

It’s also totally legit when you head out to your first school PTO meeting (you’ve never gone before because it’s on Boy Scout night) and you mean to post on the event page, “I’m trying to make it” but instead post it on your personal page on Facebook and then leave the house for several hours…Only to return home to comments from friends who are obviously worried about you. And you realize your comment on the wrong page came across as a rather pathetic plea for attention. Then you’re worried because you would never vaguebook…so you wonder how well your friends actually know you. But then you realize you are probably over thinking it. So you drop it. Only to then write a full paragraph about it on your blog.

And finally, have you heard of Paribus? It’s a completely legit app that you put on your phone and it finds money for you. It scans your purchases and if it finds what you bought cheaper (for instance, you order something from Amazon and then the price drops) they get the money back for you! I have just been a member since February 1st and have gotten over $7 back so far. After signing up, there is no more work for me. Paribus makes its money by keeping 25% of the money recovered. It’s win-win.

And that’s about it. I’m trying to make it. To the PTO, to bed and maybe even to my next birthday.