{This should be obvious, but these photos were taken at my house, not at Breakfast Club during feeding therapy.}

Before I start, notice that can of apple juice in the photos? Apollo’s doctors and nutritionists encourage us to give him juice. As they say, “anything has more calories than water”. Unfortunately, Apollo will only drink water (and more recently herbal tea). He happened to see those little cans in the store and asked for “Apple Coke”, a name I found amusing. Chuck and I don’t keep pop in the house, but on the rare occasion we purchase it, it is usually Coke. Apparently Apollo has taken note of that. At any rate, he has, over the past couple of weeks drank several  cans of “Apple Coke”. 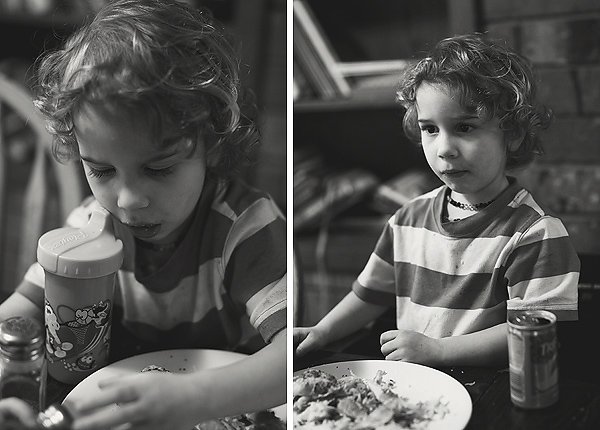 Today is Apollo’s fourth week at Breakfast Club. Since the “little kids” began school in the fall Apollo has wanted to “go to school”. Not surprising since he learns so much about life from his older siblings. This desire has worked to our advantage since enrolling him in Breakfast Club (AKA: Feeding Therapy).

He knows that on Tuesday mornings he goes to his “school”.

It still boggles my mind that with all the trouble we’ve had feeding Apollo no doctor or therapist has ever mentioned the incredible group therapy happening just ten minutes from my house! I didn’t hear about this group until I metioned on this blog my desire for Apollo to have a group of non-sibling peers to help him learn to eat.  Then I got a handful of emails and messages from local readers telling me that Connections, the Speech and Language Pathologist group just down the highway from us has just that! You have to understand, we live in a rural area on five acres and mostly surrounded by trees, but I drive by Connections every time I go into town!

Anyway, I quick rundown of progress at feeding therapy.

Week 1: Apollo didn’t want me to leave the room, but I managed that halfway through. He sat with the four other kids and ate some cereal.

Week 2: I was able to leave as soon as they were done “warming up their mouths” and I was told Apollo ate half a pancake. Pancakes are a food that Apollo won’t eat at home. Not even a bite. Just a few days later Tilly made pancakes for breakfast and he ate half of one! It is so exciting to see him eat a new food. He has since not eaten pancakes, but I’m happy for any baby steps.

Week 3: I had high hopes that last week he would march right into his “class” by himself. No such luck. In fact, less than ten minutes after I left the room I heard him crying and crying…it was so hard to sit tight and listen and not go see what was going on…within a few minutes the therapist came out and told me they didn’t want him to learn I would “rescue” him every time he cries, so they wanted me to wait until he calmed down to go in. This is exactly what we do with him at home.  So I did, and when I finally went in he said, “Why didn’t you come when I called you?” It was hard on this Mama.

With so many older siblings Apollo has never been left without one. He has never even been babysat by his grandma without an older sibling along with him. Once I was there, he ate one bite of banana (a food he won’t even put in his mouth at home), tasted some oatmeal (he does eat oatmeal at home, but this was instant, so different from what he is used to) and ate several servings of cantaloupe.

When I am in with him I can literally see him studying the other children and deciding to “try” the new foods…even if it is only a lick. And I think it actually helps to see other kids who are sometimes “nervous” about their foods.

I am so hopeful for this group. I am convinced it is exactly what he needs to be a successful eater!